Save money and spread the cost on Scott bikes.

The Scott name is well known among cycling’s racing fraternity, and not just due to racers like the Yates brothers of the Mitchelton-Scott pro team and mountain bike world champion Nino Schurter. The company’s carbon fibre competition frames have always pushed the envelope. Back in 2007, a Scott Addict weighed less than 6kg, with the frame accounting for just 790g. In 2019, a Scott Scale RC 900 World Cup hardtail mountain bike tips the scales at 9.3kg – less than some road bikes!

Yet it was a revolutionary product in aluminium that launched the company in 1958. American founder Ed Scott invented tapered aluminium ski poles, which soon eclipsed their bamboo and steel predecessors. Scott is involved in winter sports to this day but diversified into motocross and cycling years ago.

Since 1978 – and despite having ‘USA’ in the name for a long time – Scott’s headquarters has been in Switzerland. It’s perhaps this long exposure to European cycling culture that has resulted in an unusually strong range of practical transport bikes for a nominally anglophone company. Hybrids with all the necessary commuter kit? Check. E-bikes designed for day-to-day use? Check.

All of the bikes within Scott’s ‘City Urban’ category and many of its e-bike hybrids have the letters SUB in their name. It’s surely a play on SUV (motoring’s ‘sports utility vehicle’), and an indication that that model is pitched as a rugged, everyday all-rounder. Unsurprisingly, SUB bikes predominate in our round-up. 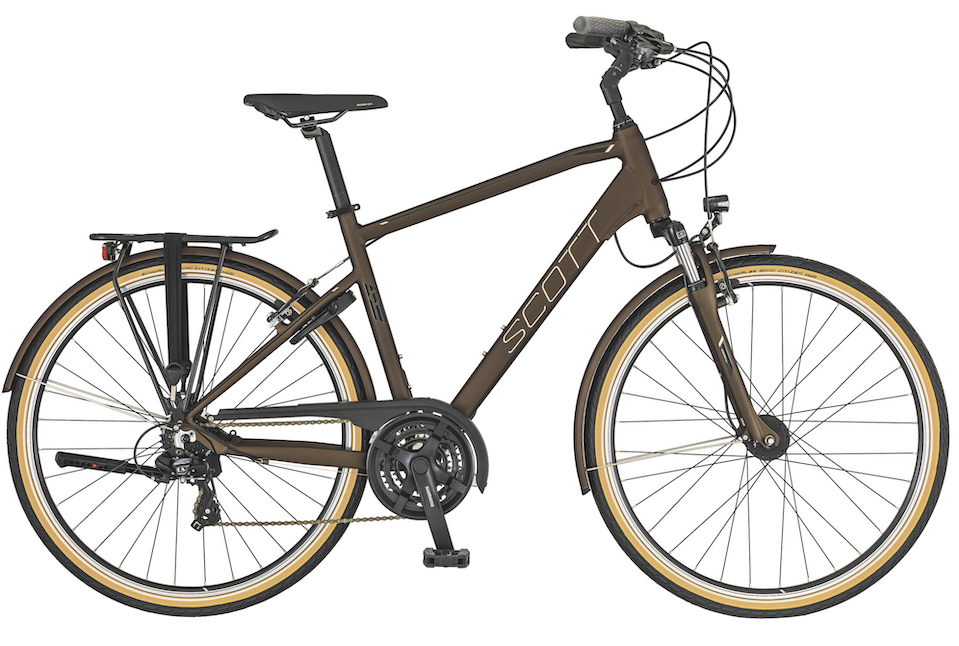 An upright, adjustable stem and a backswept handlebar provide the SUB Comfort 20 with a relaxed riding position that justifies its name. The tyres are 47mm wide, enough to soak the vibration from the worst roads. While the suspension fork is basic it will, if nothing else, help keep you upright if you hit an unseen pothole. The best thing about the bike is that it comes with all the commuter trimmings, the cheapest of Scott’s bikes to do so. As well as mudguards and a rear rack, it’s equipped with hub-dynamo lighting, a chain guard, a kickstand, and a frame lock. Gearing is 3x7 Shimano Tourney with a decent range. Brakes are V-brakes. A unisex model with a step-through frame is also available. 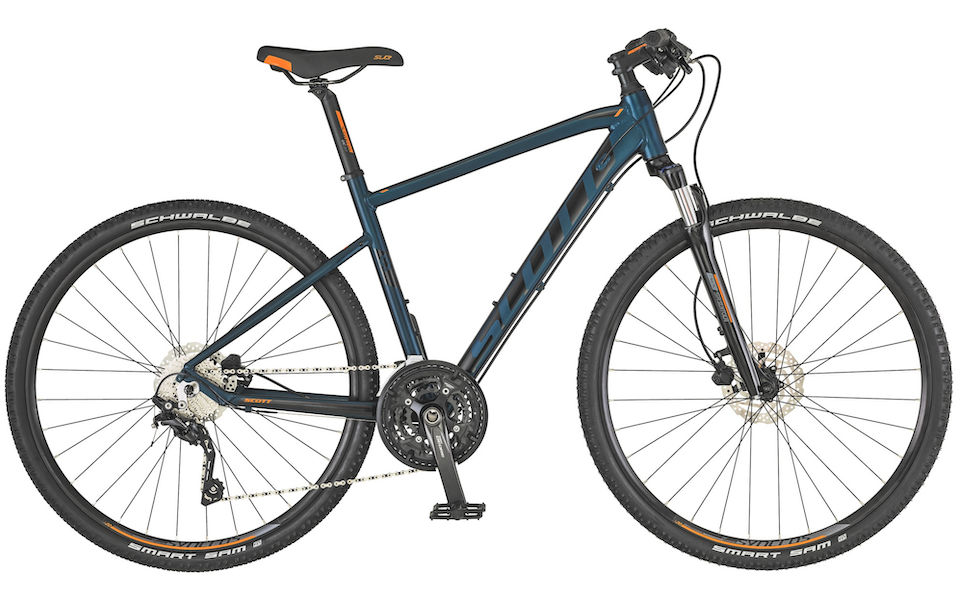 Scott’s SUB Cross bikes are town-and-trail hybrids that will tackle unsurfaced forest roads and suchlike as well as city streets. The downside is that they don’t come with commuting equipment. However, they have the fittings you need for a rear rack and mudguards, and there is an upside: more money in the budget for better components. The SUB Cross 20’s 63mm travel suspension fork has a hydraulic lockout, so won’t bob when you don’t want it to. Shimano MT200 hydraulic disc brakes are decent, all-weather stoppers, and the 3x10 Shimano Deore transmission has a gear for every situation. Those lightly-treaded Schwalbe Smart Sam tyres aren’t too bad on tarmac but would be better swapped for something slick if you’ll be on roads all the time. A ladies’ model is available. 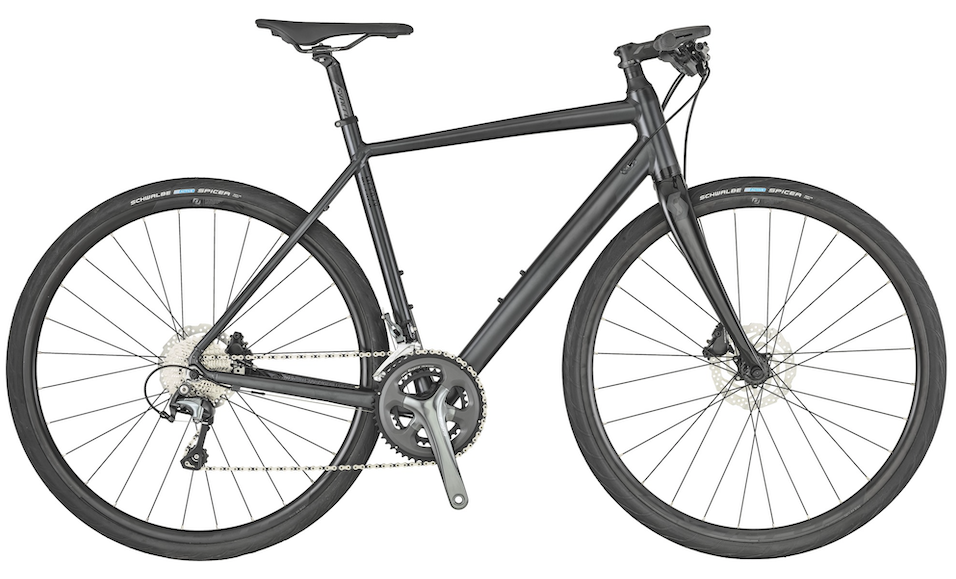 The Metrix 20 is a sports hybrid that combines the low weight and rapid acceleration of a road bike with the more easily accessible brake and gear levers of a hybrid. It is, in other words, a flat-bar road bike. The gearing is straight from Shimano’s road collection: a 2x10 Tiagra setup whose bigger (50-34) chainrings reflect the higher speeds it’s likely to be ridden at. Thankfully – because narrow, high-pressure tyres can be uncomfortable with a flat bar – the tyres are 10mm wider than the 25mm road bike standard. They’ll soak up road buzz better and are less likely to pinch flat on potholes. Other than bar-ends, which provide a welcome extra hand position, there’s no equipment; it’s a road bike, after all. However, a rear rack and mudguards can be fitted. 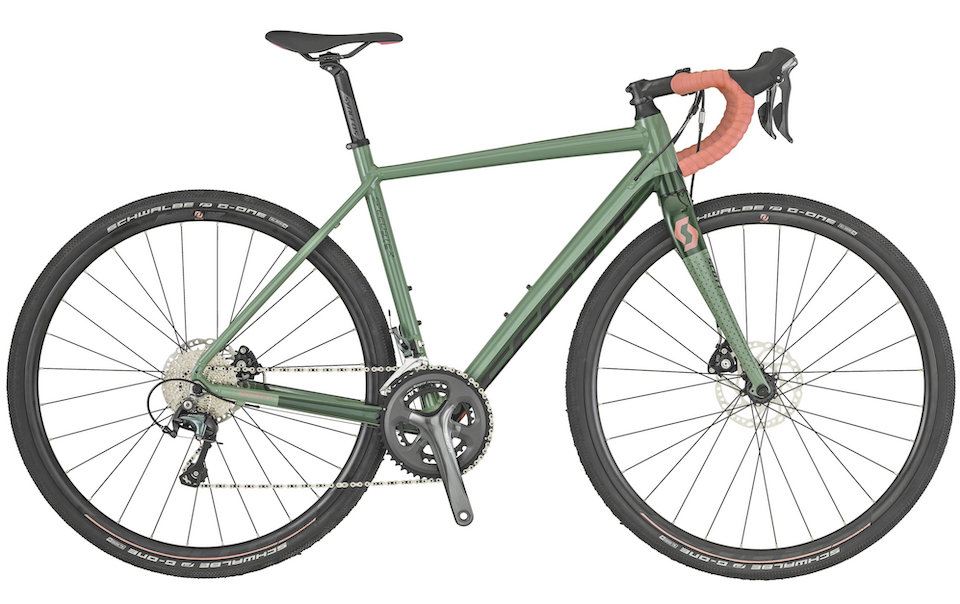 If you do want a drop-handlebar commuter – perhaps because you’re riding further or faster, or expect to be hacking into headwinds – a gravel bike is one of the better options. Wider tyres and more rugged wheels will cope with badly surfaced roads, the riding position is less head-down, and most are designed to accommodate mudguards and a rear rack. The Contessa Speedster Gravel 25, Scott’s entry-level women’s model, ticks all those boxes. A carbon fork and aluminium frame keep its weight down to 10kg. Gearing is 2x10 Shimano Tiagra again, while the brakes are mechanical discs. The Schwalbe G-Ones are gravel tyres with a light tread that are at their best on non-tarmac roads; fit for slicks for more road speed. The men’s version is the Speedster Gravel 30. 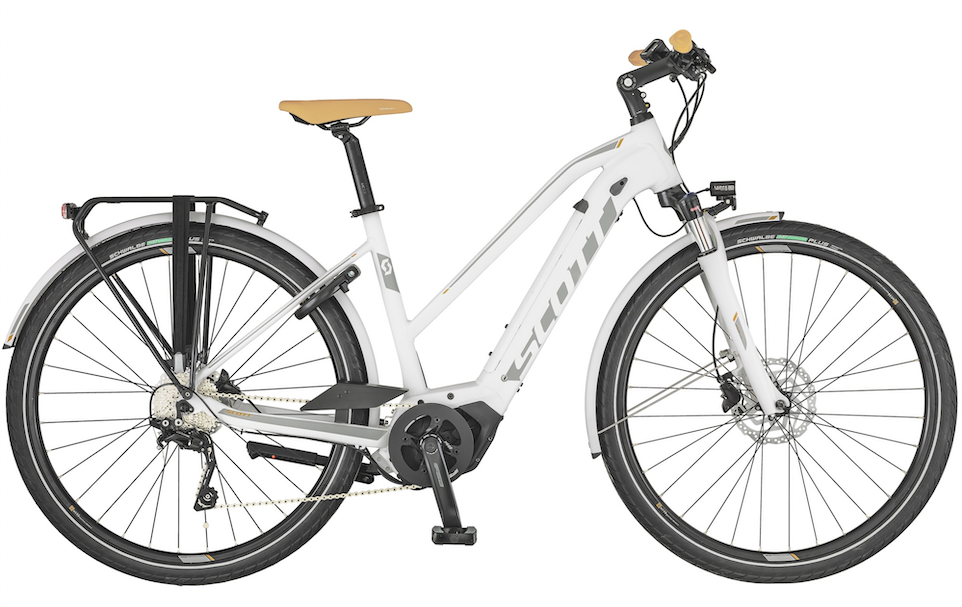 There are so many well-equipped Scott e-bikes that it’s hard to pick just one. All the urban models come with a rear rack, full mudguards, and a kickstand, and most of them – like the Tour eRide 10 – also have a frame lock and lighting that draws power from the big battery. The Tour eRide 10 is one of the cheaper models that integrates that battery with the frame. That looks better, doesn’t interfere with fitting a bottle cage, and puts the weight in the best place for balance when riding. The 500Wh battery powers a smoothly accelerating Bosch Active Plus mid-motor; assisted range is up to 80km or so. The bike also available as the Tour eRide 10 Men, which has a top tube.

Bikes worth more than £1,000 will soon be generally available on Cyclescheme - for updates on the new scheme head over to our 'Freedom to ride' page.