How to get more from your e-bike

Electric assistance will change the way you approach cycling, but there are a few more things to think about.

An e-bike can transform your cycling by making trips that otherwise wouldn’t be possible or appealing. A ten-mile, hilly commute when you’re unfit? No problem. Riding to the office on a sultry summer’s day in your smartest clothes? No sweat. Dropping your kids off at school on the way to work? Easy.

In most respects, e-bikes that conform to EU regulations are treated like unassisted bikes. You can ride one wherever you’d ride a normal bike and you’re not required to pass a test, or tax or insure the e-bike. You just need to be at least 14 years old. However, living with an e-bike is different in terms of the challenges and opportunities it presents. We’ll look at a few of them here.

Running out of power

Sooner or later, you’ll find yourself with a flat battery. This isn’t the catastrophe that running out of petrol is for a motorcyclist because you can still pedal. It’s harder than riding a bike that doesn’t have a motor and battery as the e-bike will be heavier, possibly a lot heavier. There may also be a little drag from the motor, particularly if it’s a crank-driven mid-motor.

You won’t damage your e-bike by pedalling it without electrical power. You will just get more tired. Select an easier gear and slow down. If you can keep riding faster than walking pace, you’re winning. Since hills will be tough without power, adjust your route so you’re climbing as little as possible. If you lose power too far from home to pedal back, you could hop on a train with your e-bike (see below) or phone a friend and put it in the back of their car. 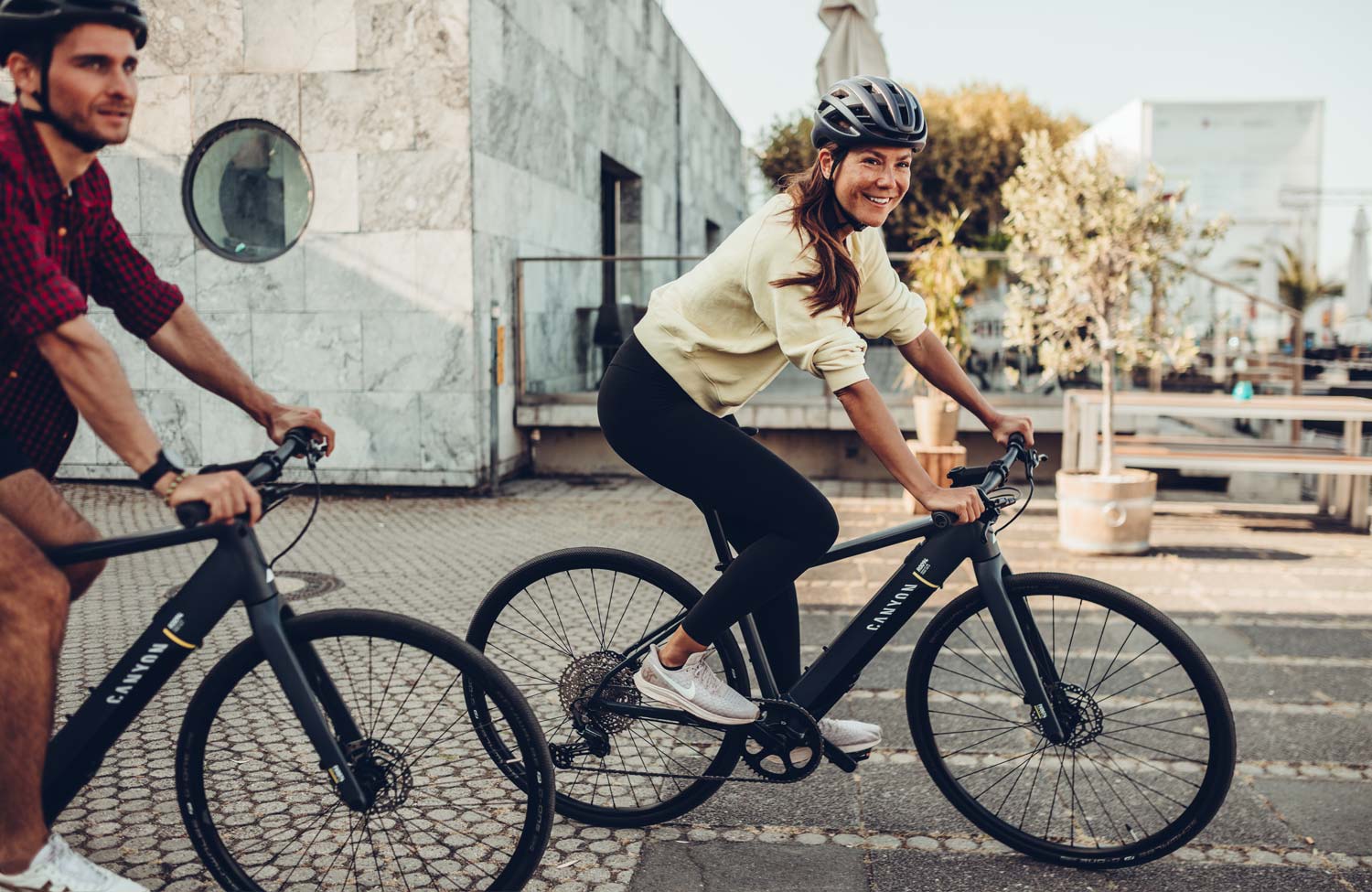 Obviously, it’s best to avoid running out of power in the first place. Be pessimistic about the range per charge. That figure of, say, 50 miles is what you might get on a good day. It’s dependent on the assistance modes used, the terrain, rider weight, wind, and temperature; cold reduces battery capacity. Until you have a good feel for the range you’ll get for the kind of riding that you do, play it safe. Assume the range will be perhaps two-thirds of what’s quoted.

When you’re riding, keep an eye on the charge remaining. If you’re running low, eke it out by switching to the lowest assistance mode you can tolerate. Still looking dicey? Revise your route and take a flatter option, enabling you to travel in Eco mode or maybe without any assistance at all in places.

For long journeys, you could carry a second battery in a pannier. (Some e-bikes can be equipped with a range extender add-on battery that fits to the frame.) If you don’t have a spare battery, you could take your charger so you can top up at a café stop or at work. If you’re really organised, you could even leave a spare charger at work!

Taking your e-bike by public transport

You can take your e-bike by train. For a long time this was a grey area. E-bike owners assumed they were allowed because in most other situations e-bikes are treated as unpowered bikes. Yet they weren’t officially sanctioned, so there was a risk a train guard might stop you boarding. The rail network’s rules, the National Conditions of Carriage, have thankfully caught up. Rule 22.4 says:

“Unless prohibited by a Train Company’s individual cycle policy, cycles of the electric-assist pedal cycle type may be carried on trains provided that they are similar in size to a traditional cycle. Power assisted cycles without traditional cycle-style pedals, or with oversized dimensions cannot be carried.”

You can find the regulations about bikes for different train operating companies here.

The cycle storage facility on some trains requires bikes to be hung vertically by the front wheel. Because e-bikes are heavy, this can be awkward. Remove the battery and any bags from your bike, and don’t be afraid to ask for assistance. If you’ll regularly be travelling by train with your e-bike, choose a folding e-bike.

A bagged or covered folding e-bike is the only kind of e-bike you can expect to take by bus. Even then, it will generally be at the driver’s discretion. 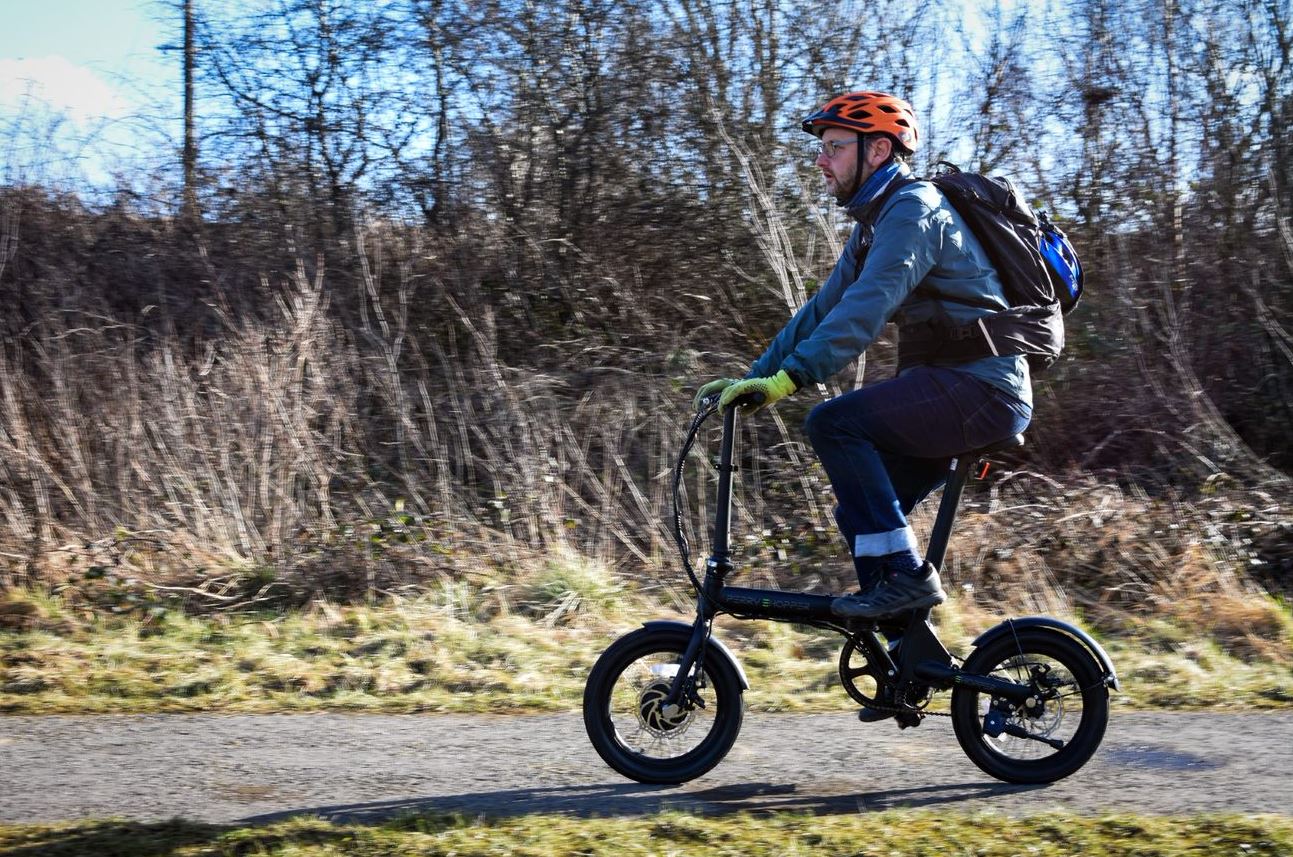 You can’t take an e-bike on a plane because batteries larger than 100 watt-hour capacity (or 160 watt-hour with airline approval) aren’t allowed on board. E-bike batteries are bigger than this.

Replacing other car journeys with your e-bike

Cycle to Work legislation specifically allows you to use your Cyclescheme bike or e-bike for other journeys than the commute to work. As an e-bike is such a big investment, it’s worth considering what other roles it could fill. Could it transport your kids to nursery, to school, or to clubs and other activities? Could it do the weekly shop or handle a run to a garden centre or DIY store?

There are two ways to use your e-bike as an all-purpose utility vehicle. The simplest and cheapest is to add a trailer. A luggage trailer should handle loads of 40-50kg. A child trailer will generally carry two children of pre-school age and can also be used for ‘soft’ loads such as groceries. If your e-bike has a rear hub motor, check that trailer’s hitch is compatible with the axle.

The other option is to invest in an e-cargo bike. E-cargo trikes are also available, but the narrower profile of a two-wheeler will make it more convenient for commuting as you’re less likely to become stuck in traffic or balked by barriers.

E-cargo bikes with a front box such as the Riese und Müller Packster 70 or Babboe City-E are great for transporting smaller children: you can keep an eye on them, and the box can easily be equipped with a raincover. Longtail e-cargo bikes with a rear bench and footrests, such as the Tern GSD, can carry children both small and large; a raincover is available for little ones. Either type of e-cargo bike will haul heavier loads than a trailer. The Tern GSD rear rack, for example, is rated for 100kg.

E-cargo bikes have daunting-looking prices, but don’t forget that you’ll save at least 25% if you get one through Cyclescheme. And if it replaces a car, you could save a couple of thousand pounds every year in running costs.