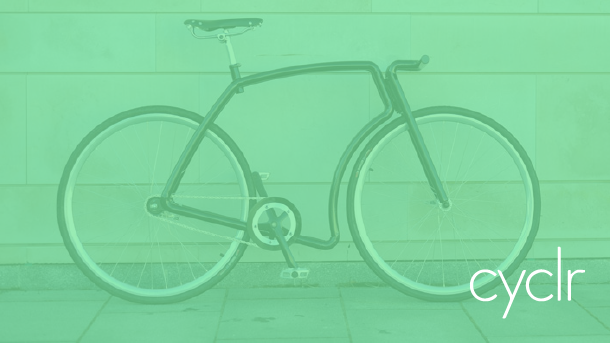 Each month, our friends over at Cyclr.com will take you by the hand and guide you around their latest discoveries in the cycling world. Everything from new brands, designers and makers through to some ingenious inventions and ideas.

Cyclists today are more spoilt for choice than ever before. From the latest in urban commuter bicycles to leather hammocks to hold ones banana (yes such a product does exist); the cycling retail arena has something for everyone.

To celebrate this wonderful reality, every month we will search far and wide for the latest bike-related delights to grace the cycling market. Read with caution however, as even though some of these discoveries will fill provide wonderful solutions for your cycling needs, others will horrify you to your core. Not every spark of innovation can give birth to perfection after all.

This month we have a folding bicycle that resembles an umbrella, a reinvented alan key, the only thing missing from Batman’s utility belt and many more bike-related things.

We all love a good night ride. Taking to the roads, especially in cities, is an experience like no other. With the summer upon us, night rides will be more frequent, so a good light is definitely a priority. Introducing Knog’s latest innovation, the Knog Blinder Arc 1.7. Ignoring the fact it’s name sounds like a Klingon ship from Star Trek V: The Final Frontier, the light does pack a pretty solid punch. The light is loaded with 170 lumens, ensuring the beam can be seen up to 1000 meters ahead, no problem.

Not sure about you but I hate buying batteries. With this slice of heaven, no batteries are necessary. This bad boy is USB charge friendly. With a recharge time of four hours, one charge will last 90 minutes on high beam, 180 minutes on medium beam, 360 minutes on low beam, and 720 minutes on flash. We know, pretty impressive. The light uses Constant Drive Technology, the new buzz phrase amongst bike light geeks. In simple English this simply means that if the battery gets low, the light will not dim. It will continue to work at it’s full potential until the battery is completely dead. This light also uses a Thermal Management system that automatically regulates light output when the bicycle is stationary which helps with the life of the battery.

In short, this light is pretty awesome. The quality and charging method of the Knog Blinder Arc 1.7 will keep your path illuminated for seasons to come.

Thieves are, for use of better word, persistent-rodents. Houses, cars, bicycles, my neighbours kitten… If a thief really wants something, they find a way to get it. Locks mean well with their hard exterior, but the most committed of thieves will find a way to get past one. Until now…

Adopting the friendly exterior of a regular stem, the Stemlock by Ixow looks regular, but when locked with it’s partner key, internally it disconnects a bike’s handlebar stem from its fork, making it impossible for a thief to steer.

When unlocked, the stem and fork stay securely connected, ensuring a pleasant hassle-free riding experience. Upon parking, users insert the included key into the top of the Stemlock, push it down and twist it a quarter turn, then remove it. The stem is then disconnected from the fork, rendering the bicycle absolutely useless. Any attempt to use the handlebars results in them swinging left and right with no effect on the angle of the front wheel.

In addition to making your bicycle a less appealing target, the 360 turning handlebars also allows for easier parking in cramped spaces.

The Stemlock by IXOW is expected to scheduled to launch this August at Eurobike, and will retail at €74.90 (about £66).

Expect to see Stemlock at many a store near you very soon.

See.Sense, a Northern Ireland born brand is bringing a digital upgrade to bike tech. The original See.Sense lights were designed in response to a problem faced by See.Sense founder, Philip McAleese, as a daily cycle commuter. Frustrated at how invisible cyclists were, See.Sense was born.

An office favourite at Cyclr HQ, the “Corsa Rosa” edition was designed to commemorate the Giro d’Italia coming to Belfast and Dublin. The special limited edition Corsa Rosa is the highest performance, ‘Elite’ version of the See.Sense rear light, with 144 lumens. For the technically inept like me, 144 lumens means very bright light output.

The light has pink highlights and a pink silicon mount, matching the official Giro d’Italia colour. Contained within a beautifully packaged pink box the light comes with a commemorative brochure detailing the famous Belfast cycling history of William Hume and John Boyd Dunlop. It also features artwork of local artist, Deepa Mann-Kler who was exhibiting her artwork at the ‘Art of Cycling’ exhibition at the Titanic Belfast during the Giro d’Italia.

Learn more about the Corsa Rosa edition light at Seesense.cc

It amazes me how people find ways to innovate the most basic of designs. Half the size, with double the force, Daniel Neale has developed a practical solution for cyclists and mechanics with the ‘D-Key’ – or simply put, the reinvention of the allen key. Convenient, practical and packing double the force, the key looks to minimize size whilst improving functionality.

Grab a key and support the project on Kickstarter

Honeycombe-esque, yes. But we do love the look of this helmet. Spanish brand, Catlike are one of the more design-forward helmet makers out there. More than just looking good, they also are some of the most lightweight helmets on the market. Their honeycomb design stands out as a unique look in the world of cycling, while providing lightweight protection and excellent air-flow throughout your ride.

There’s nothing worse than discovering a piece of unusual tech you want but you can’t have. On this occasion the former will not pose such a problem, my friends. Introducing the Viks Urban Bike, a rethink of the urban cycle with their unique and unusual design. Indrek Narusk, engineer and owner of Velonia Bicycles and avid cyclist, wanted to create something entirely new for the daily commute. Looking to a more powerful form of transport, the motorcycle, Narusk took inspiration from Cafe Racers and their unique riding position, and so Viks was born.

With all these bits of safety technology relying on light to provide the rider with a way to be noticed, one could quite easily go out at night looking like their own little Las Vegas. The Zackees ‘Turn Signal’ Gloves, however, take a slightly more subtle approach: a discreet switch on the inside of the glove lights up the signal on the other side of the hand, indicating to drivers both behind and in front of the rider. Also, Zackees gloves are certainly built to last, as they are made with highly durable materials, are washable, and have a battery life of 3-6 months with regular use.

Find out more at http://zackees.com/

Had Bruce Wayne not grown up as an orphan, maybe his mum would’ve taught him the nutritional value of having his five a day. Maybe, as a result, he would have had a more fruitful life less plagued with darkness, loss, and misery. What I’m trying to say is that this, the Biken Banana Holder, is the only thing missing from Batman’s utility belt.

Find our more at Biken

When it comes to storing bicycles vertically, let’s be honest, the wall-mounted hooks that grab the front wheel aren’t the most attractive instruments in the world. I’m no Lawerence Llewelyn-Bowen, but achieving a balance between all elements of home decor is of some importance, no? Or maybe I’ve just been watching too many Changing Room’s reruns. Either way, it can’t be argued a poor choice of home furnishings results in inferior looking interiors.

Design rant over, back to the matter at hand – wall mounts. The commonly used hook may be effective, but perhaps not always that attractive. Plus they present a head-banging hazard.

So what’s the solution? Vancouver-based Hurdler Studios claim to have one. It’s called The Clug, a more interior design-friendly lower-profile wall-mount.

Sound’s intriguing. How does this Clug work then? The Clug is simply a flexible C-shaped bracket. Its outer plastic “clipper” section is first screwed into the wall, using a template incorporated into its cardboard packaging to establish where the holes should be drilled. Adhesive picture-mounting strips will reportedly also work, if you don’t want to put holes in your wall.

At £5, the Clug is cheap, understated, stylish and functional, presenting a cheap solution for your bike storage needs. We love it!

Over the years we’ve seen a variety of folding bicycles, some better than others. All claim to be brilliant, packing down into tiny packages. Even in the midst of their folding brilliance, many are limited by their puny wheels that limit speed and their questionable aesthetics. Italian designer, Gianluca Sada is pitching a solution – the Sada.

Gianluca has been working on the Sada since 2008. Featuring full-size 26-inch hubless wheels, the Sada could be mistaken for an umbrella once folded.

The Mechanics
The folding action is initiated simply by pushing forward on the saddle. The wheels detach and aren’t part of the umbrella-sized package, although Sada has plans for them.

The Vision
Gianluca envisions the folded Sada being carried in a backpack. Due to the exclusion of hubs and spokes, there would be room inside the backpack to carry other items, besides the folded bike frame.
The prototype bike can be seen in action below.

Gianluca Sada is currently looking for investors to help bring it to production. Yes, we know it bears an uncanny resemblance to an umbrella when folded, but we think Gianluca deserves a chance to make his design dream a reality. Don’t you?

Learn more about the Sada bike and how you can support at sadabike.it

The Cyclr Editorial Series is exclusive to Cyclescheme and produced by Cyclr.com – Cyclr is a lifestyle destination that delivers the latest on indie cycling brands, and bike design and innovation.

Download your free copy of the Cyclr Digital Magazine at Cyclr.com/digital-magazine

Dan Joyce, editor of Cycling UK (and writer of most our blogs) talks about why reducing our...