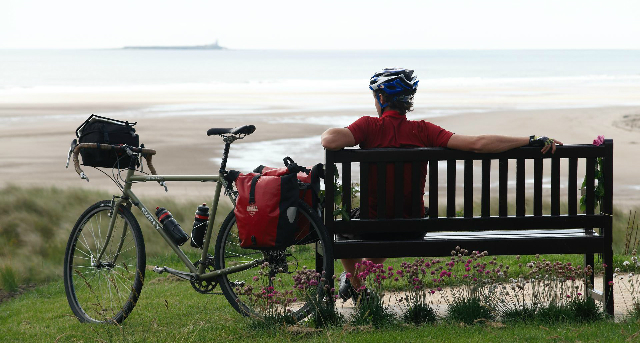 Leisure and tourism cycling on the National Cycle Network supports over 15,000 jobs and directly contributes £650m to the economy each year.

People cycling on the National Cycle Network for leisure and tourism bring over £650 million to the UK economy each year, according to research from charity Sustrans. The research looked at the average amount spent by people on day trips and cycling holidays and found that they both bring significant money to local economies around the country.

The charity conservatively estimates that people who use the Network for holidays and day trips spend an average of £7 a day, although this figure is likely to be even higher for people who take cycling holidays.

The Network, which celebrates its twentieth anniversary this year, was also found to directly support 15,262 full time equivalent jobs across the services industry, particularly in the food and drink sector where it supports over 10,000 jobs.

This year marks 20 years since Sustrans came up with the concept of the National Cycle Network which now stretches to all four corners of the UK and covers over 14,000 miles. The research suggests that popular parts of the Network make a substantial economic impact to local communities and are also important on a national scale.

Worcester: The Diglis House Hotel has benefited as a result of the National Cycle Network, in particular after Sustrans worked with Worcester City and Worcestershire County Councils to create a riverside loop, with a new bridge as the centrepiece.

Steve Pirone, the General Manager of the hotel, said: “The riverside is a very important part of the tourism industry in Worcester but until the bridge was built there was no way of getting from one side to the other.

“As a result of the bridge being built and the route being part of the National Cycle Network we have experienced a real benefit, and I’m sure other businesses near the route have seen an increase in business too. There’s been at least a 20% increase in our bar and restaurant sales and we also think the new route will increase our hotel figures in the future, as it brings more walkers and cyclists to the area.”

Devon: Liz Hodges, set up the Route 2 bike café in Topsham and now runs the Route 2 Bike Shop in the same town. Liz said: “We set up the Route 2 café after the National Cycle Network route 2 was developed in 2008. I knew cycling would be popular but I never expected the cycling revolution that we are seeing today.

“The National Cycle Network has definitely been key to getting more people out on their bikes for day trips and holidays. And the ‘Wiggins effect’ has also been important. Lots of businesses have benefitted and in my case allowed me to reinvent myself in a completely new career.”

Cornwall: Nigel Wiggett started Bridge Bike Hire in Wadebridge in 1983 with six folding bikes. Today the company is based in a warehouse containing 400 hire bikes that are used year round. Nigel said: “With the development of the Camel Trail in the 1980s and then the National Cycle Network in 1995, cycling in the area really took off and has had a massive impact on the local economy.

“We started off with just six bikes that we restored and now we have a warehouse with 400 bikes to hire. Along with that we employ two full time mechanics and during peak season we have 20 members of staff. Interestingly we are busy all year round; winter is actually as busy as summer which is quite unique in the tourism sector and really important to the local economy.”

Since the National Cycle Network was first developed, usage has increased year-on-year, for journeys to work and school as well as for day trips and holidays. Last year 764 million trips were made on the Network overall and 165 million of these were commuting journeys. This is doing great things for the nation’s health. Businesses are also reaping the benefits, as the Network saves them almost £33 million each year by reducing staff sick days.

Find out more about the impact of the National Cycle Network and how the Network boosts local economies by creating vibrant places and supporting businesses.