Cycling and the 2018 Spring Statement 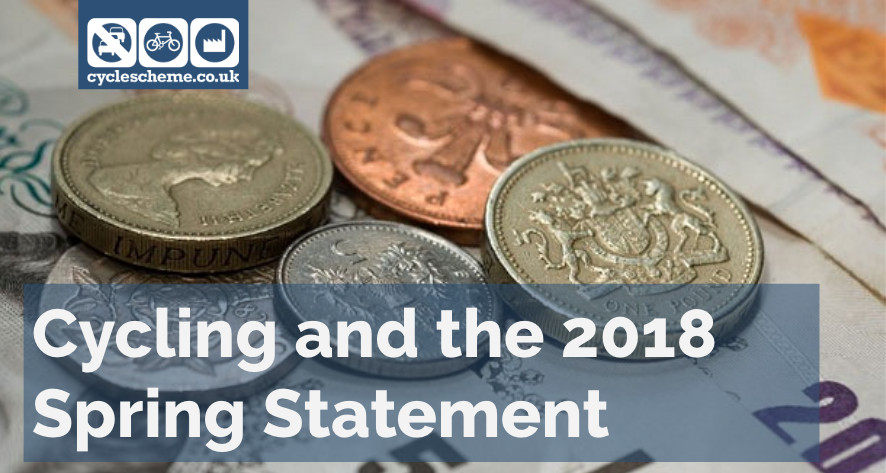 In previous years, the UK has had an Autumn Statement on the economy and a Budget in the spring. For 2018, it’s the other way around. The Budget will be in the autumn, and this March Philip Hammond issued his first Spring Statement. There was no Red Book, no big fiscal announcements. Instead we got an assessment of how the economy is doing, along with some business and investment measures. Some previously announced changes will also come into force on 6 April.

The gist of the Chancellor’s Spring Statement was that the UK economy is at a turning point. Time will tell. Rather than focusing on that big picture, we’re instead going to look at how things are shaping up for cyclists and the Cycle to Work Scheme.

First the good news: the Cycle to Work Scheme, which makes bikes and equipment more affordable and thereby promotes everyday cycling, has been left alone. This Government had ‘expressed concern’ at the growth of salary sacrifice arrangements and said it would rein them in. In April 2017 it did so: the income tax and National Insurance benefits were removed from some such arrangements. Others were spared, specifically:

This suggests that the Government wants to promote these particular salary sacrifice arrangements. Good: you’d struggle to find any cyclist who disagreed about the benefits of the Cycle to Work Scheme (of which Cyclescheme is the biggest provider). It’s a proven way of getting bums on bikes, something the Government committed itself to in its Cycling and Walking Investment Strategy (published in April 2017). Here’s a sample of what that strategy document says: ‘Walking and cycling should be seen as transport modes in their own right and an integral part of the transport network, rather than as niche interests or town-planning afterthoughts.’ Hear, hear!

Cycling to get crumbs from the table

Warm words from the Cycling and Walking Investment Strategy are all very well. The reality is that cycle use is flatlining, according to the Walking and Cycling Statistics, England 2016, which were released by the Department for Transport in January this year. Cycling accounts for 2% of all journeys in England – just as it did way back in 1989.

Even the Cycling and Walking Investment Strategy acknowledges that investment in cycling will fall to just 72p per head in two years’ time. There are parts of the country bucking this trend. Scotland plans to invest £15 per head nationwide. The Mayors of London and of Manchester are investing £17 per head in those cities. These sums should make a palpable difference to the daily lives of commuter cyclists – as well as ‘would be, could be’ cyclists who haven’t yet been tempted onto two wheels.

In his Spring Statement, the Chancellor did ‘invite proposals from cities across England for the £840 million fund [he] announced at the Budget to deliver on their local transport priorities.’ Some of this money might get allocated to cycling but it’s not ringfenced; cycling isn’t specifically mentioned. The money is for ‘schemes that will make commuter journeys faster, better and safer’.

The Spring Statement referred to the fact that the Government is ‘undertaking the largest road building programme since the 1970s’. This might be welcomed by drivers. Most cyclists would prefer to see some or all of that money going on improving the roads we do have: getting rid of potholes, for example, and reallocating road space from motor traffic to cycling, as the Cycle Superhighways have done in London.

One chink of light for more sustainable transport is that the benefit-in-kind rates for cars will rise from 6 April. Employers who provide company cars to employees will likely see cost rises as a result. There should thus be a bigger incentive for employers to make bikes available to employees via Cyclescheme rather than to provide employees with increasingly expensive company cars. Along with all the other benefits cycling brings, doing so would save employers even more money.

The National Minimum Wage (NMW) rates change this April, as they do each year. If you’re 25 or over, the hourly rate goes from £7.50 to £7.83. For those aged from 21-24, it increases from £7.05 to £7.38. For those aged 18-20, it changes from £5.60 to £5.90. For low wage earners, these are steps in the right direction. There is a potential impact for low earners wanting to access the Cycle to Work Scheme. If an employer is feeling the pinch economically and raises salaries by the minimum amount required, an employee paid just above the NMW before 6 April might find themselves earning only the NMW after it. Low earners need to earn a bit more than the NMW to take part in the Cycle to Work Scheme.

The income tax bands in England, Wales, and Northern Ireland change from 6 April.

Scotland, meanwhile, will have five bands from 6 April, following a vote by the Scottish Parliament on 20 February.

If you now find yourself in a different tax band from before, this will affect the savings you’ll make through Cyclescheme.