Guest Blog: See.Sense - 7 Reasons Why Cyclists Are Missed By Other Road Users

Seeing & being seen: See.Sense creates award-winning bike lights which give cyclists more visibility on their ride, and cities more information on their roads.

When you think of cycling in the summertime, the first thing you might think of is getting out and enjoying those longer evenings, and (hopefully) getting plenty of hours when the sun is shining brightly. But you might not immediately think about your visibility on the bike…

There are higher numbers of collisions recorded in the summer months than in Autumn or Winter. In fact, nearly 80% of cyclist collisions happen in daylight hours (not the nicest stat to think about). So that’s why we are here to help highlight the 7 reasons why cyclists can be missed by other road users and importantly, help you take steps you need to stay daylight visible.

In this piece by John Sullivan, a Royal Air Force pilot and cyclist, he describes how the human eye simply hasn’t been able to adapt to deal with vehicles and bicycles travelling towards us at speed. The article explains the ‘sorry mate, I didn’t see you’ spiel - but without justifying it. There’s also an interesting article by Bicycling in the US, who point out the phenomenon of a ‘person's failure to notice an unexpected object’ in plain sight. It's known as “inattentional blindness.” It’s the reason why a driver might look right at you, but cut you off anyway. Their eyes see you and your bike, but they don’t register your presence.

2. Education For Drivers About Cyclists

Should cycling have more of a presence in the driver licensing process? Research has found that the amount and focus on cyclist advice has differed across jurisdictions. And if you think back to your learning to drive days - there might not have been a lot of advice around cyclists - and in particular how you share the roads with them.

Apart from the obvious size difference between a car and a bicycle. Drivers might still not be used to looking for smaller objects/people on their journeys, expecting to see more cars. In the Bicycling article, they explain how drivers can miss unexpected things when they differ from their attention. “We tend to see what we're looking for - so if drivers are always looking for cars and bicycles are rare, they can look right at the cyclist and not see them.”

Let’s be honest, the car is still the ‘king’ of our streets unfortunately. Safety in numbers is a big thing too. The ECF (European Cycling Federation) explains that countries with the lowest levels of cycle use have the poorest cyclist safety records. Makes sense, doesn’t it? The more often we see something, the more ‘normal’ it becomes. So the more people we can get cycling - the better! It’s great to see the campaigning which is being done to help cycling become the ‘natural’ choice for journeys and commuting. Our friends at CycleScheme are doing a fantastic job to help change this attitude across the UK, helping get more people on two wheels and feeling the benefits of it.

DRLs (daylight running lights) have been legally required to be fitted at the front of all new EU cars and small vans since 2011. Employing some of the same strategies as motorcars, including DRLs may help cyclists catch the attention of drivers. Studies have shown the benefits of daytime running lights for bikes. Daylight-visible bike lights are brighter and stronger than those just created for night-time use. As a result, drivers have more time to see you, react and give you space on the road. See.Sense lights will also react to situations to flash at riskier moments, with a flashing light pattern making you more visible to drivers than a solid light pattern. 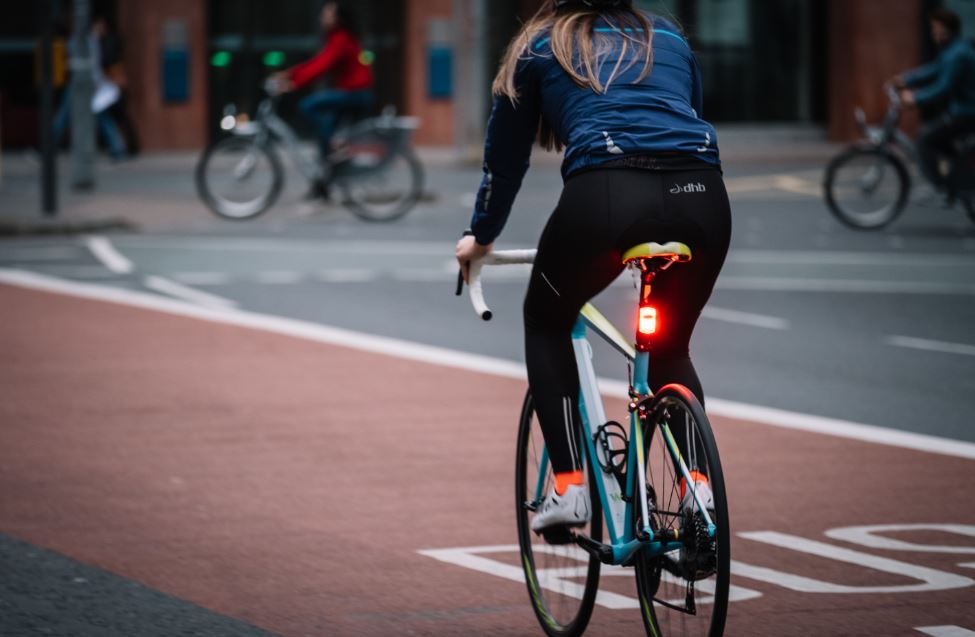 We recommend using flashing lights, to help attract attention sooner. When you have lights that flash brightly from both front and rear can help alert drivers sooner than a solid light, reducing risks out on the road.

Cyclists aren’t always in a great position for being seen on our roads - if you think about some of your journeys, there might be low sun, a dirty windscreen, heavy rain beating on someone's car or something else that just might mean there is less of a chance of them seeing you. The piece from John Sullivan in London Cyclist explains this more.

A car’s lights shine during daylight, so why not a bike’s? If something as large as a car needs to be seen during daylight hours, we think cyclists need to be kept visible with daylight-visible lights too. See.Sense was one of the first companies in the world to create daylight-visible bike lights. Lights that ensure you can see and be seen both day and night, no matter how bright the sun is. Check out See.Sense lights here.

A lot of cyclists drive cars too – so let’s look out for each other out there. Stay safe, be visible, and enjoy the ride. Learn more about our mission to light up our roads in our other guest blog, The See.Sense Story.