Is the Babel Bike the safest bike ever made? 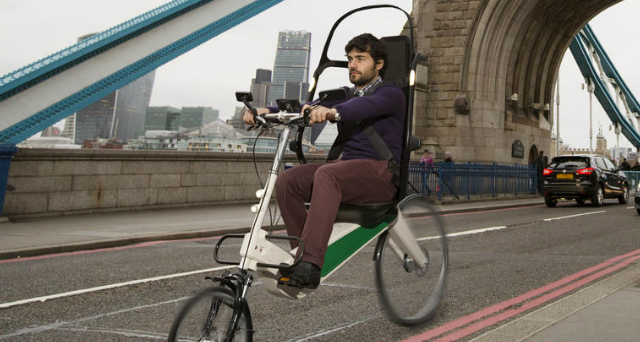 The Babel Bike puts seatbelts and a roll cage on two wheels. Would you be willing to strap yourself into one?

One of the big reasons that many people don't commute by bike is the fear of being near the traffic. London-based Crispin Sinclair Innovation has set about addressing that fact, with its new Babel Bike. The Babel Bike possesses features such as a protective cage around the rider and seatbelt. As a result it's being promoted as "the world's safest bicycle."

Development of the Babel Bike is being led by Crispin Sinclair, son of famed inventor Sir Clive Sinclair – the man behind such products as the Sinclair C5 electric vehicle.

The semi-recumbent Babel Bike – which will be made in both pedal-electric and fully human-powered models. The Babel Bike is designed to be pedalled, with electric assistance when wanted.

What Makes the Babel Bike so Safe?

Along with its roll cage, other safety features include a seat belt, steel foot protectors, a car horn, rear-view mirrors, and a lighting package that includes automatically-activated head- and tail lights, turn indicators, hazard lights and brake lights. In tests on prototypes, the bike's cage reportedly allowed it to be pushed away when hit by heavy transport trucks.

Is the Babel Bike Electric?

The babel bike comes in electric and non-electric versions.

The electric Babel Bike sports a 250-watt electric-assist motor from Shimano with an estimated range of 50 to 80 miles (about 80 to 129 kilometers).

Why Was the Babel Bike Developed?

In addition to creating the world’s safest bicycle, the team’s stated aim is to put a million more bikes on the roads and so take a million cars off them.

How Much is the Babel Bike?

Upon launch, the electric version will be priced at £3,499 plus £149 for the security pack (which as well as the lock also involves all the components being sealed and locked inside the frame). The non-electric version will cost £1,999. It is hoped that both will be available from May 2016.

Dan Joyce, editor of Cycling UK (and writer of most our blogs) talks about why reducing our...