No, minister: cyclists are road users 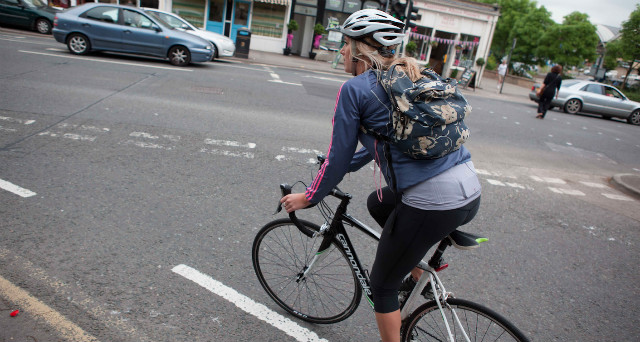 When the Secretary of State for Transport suggested that cyclists aren't road users, British Cycling's Chris Boardman was quick to put him right.

The uphill struggle that UK cyclists face in getting the recognition – and provision – we deserve as road users was encapsulated in January by someone who should know better: Secretary of State for Transport Chris Grayling. In the Evening Standard, he said cycle lanes 'cause too much of a problem for road users’. Asked by Labour MP Daniel Zeichner to clarify these comments, Grayling replied: ‘Where you have cycle lanes, cyclists are the users of cycle lanes, and [where] there’s a road alongside, motorists are the users of the road.’

The implication was clear: road user equals motorist. Grayling didn't repeat the persistent myth that drivers 'pay for the roads through road tax', but there are echoes in his comments of that other complaint that a minority of drivers hurl: 'Get back in your cycle lane.'

British Cycling Policy Advisor Chris Boardman was quick to take Grayling to task. Writing in The Guardian, Boardman said: 'If Grayling has any understanding of the concerns of the 7 million people who regularly cycle on Britain’s roads, then he would know that the vast majority of cycle lanes are inconvenient, poorly maintained and often dangerous. It is why most cyclists choose to cycle in the road. It is also the reason why just 2% of journeys are cycled, despite British Cycling having evidence that two-thirds of people would cycle if it were made safer.

'As Grayling must be aware, people are – and always have been – free to use the roads in many ways: driving, cycling, walking, horse riding, rollerblading – and we all have a duty to use our roads safely, no matter how we travel. This is enshrined in law and backed up by the highway code, which also tells cyclists that they don’t have to use cycle lanes.'

Most cyclists are more than happy to use good quality cycling facilities. The new segregated cycle lanes on London's Embankment and Blackfriars Bridge have seen cycling numbers rise by 70% on these roads. Rather than 'causing problems for road users', they've demonstrably improved things for some road users: cyclists. Less obviously, they've improved things for other road users too: more cyclists means means fewer people in motor vehicles and thus less congestion and queuing.

Good quality, segregated cycling facilities are not the norm, however, and on some roads, with or without facilities, cycling can feel threatening. Grayling may not appreciate this; he has previously admitted he hasn't ridden a bike since he was a student at Cambridge in the 1980s. And he demonstrated a lack of awareness of cyclists just last year, when he doored a cyclist after failing to look properly as he got out of a ministerial car.

'Grayling needs to get on a bike and experience the roads for himself,' Boardman concluded, offering to take the Transport Secretary on a ride through London.