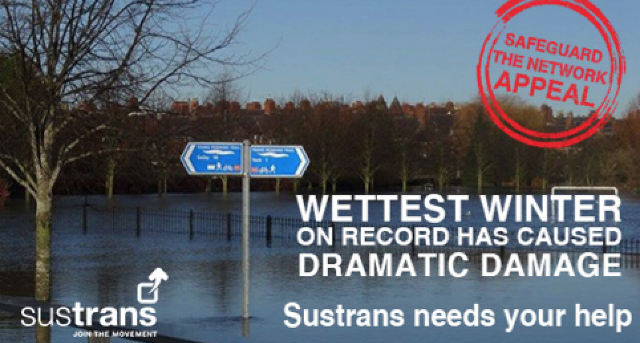 With your support at this critical time, Sustrans can attempt to address many of the remaining maintenance problems caused by the flooding and harsh weather.

In response to the unprecedented challenges Sustrans is facing this year it has recently launched its Safeguard the Network Appeal. The charity relies on donations to be able to spend on average £1.3 million a year fulfilling its maintenance responsibilities across the National Cycle Network.

This year Sustrans is grappling with the aftermath of record-breaking levels of rainfall and severe flooding, which have damaged vital parts of the National Cycle Network.

The challenges it faces range from clearing ditches and replacing fencing to removing debris and reinstating bridges. Only with these mammoth efforts can it restore pathways and bridges that have experienced major flood damage.

Please support Sustrans’ appeal and help them safeguard the paths and routes we all love.