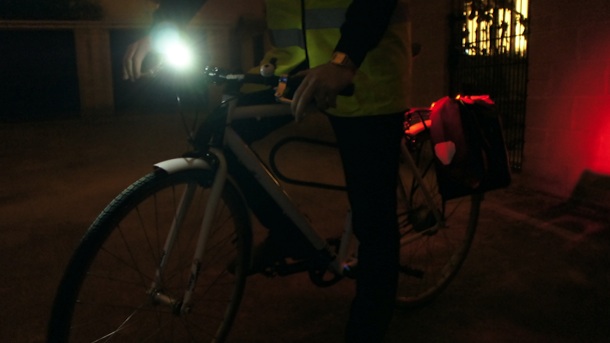 When British Summer Time is switched off at the end of October, the daytime commute becomes dark. That’s no reason to stop cycling. Cycling at night is just as enjoyable and convenient as in the daylight. By continuing to be active in the outdoors while the rest of the country hibernates...

Cycling at night is just as enjoyable and convenient as in the daylight. By continuing to be active in the outdoors while the rest of the country hibernates, you’ll retain your summer vigour – and you’ll able to enjoy autumn and winter comfort foods without guilt!

So long as your bike is equipped with good lights (see our guide), cycle commuting is perfectly safe in the dark. Drivers actually treat you with more respect and give you a wider berth when overtaking. Your white front and red rear cycle lights remind them that you too are traffic.

Reflective items also help pinpoint your presence. Pedal reflectors are especially good. The up-down motion instantly marks you out as a cyclist. You can use reflective ankle bands if your bike doesn’t have them.

Being visible is a critical part of commuting in the dark, although it’s not just about adding equipment to you and your bike. You may need to adjust your speed or your route as well.

Don’t leave home without them

If your lights aren’t bolted securely to your bike, the best place for them to live from October to March is in the bag that you use for commuting. That way you’ll never be without them. In the rush to get on your way in the morning, it’s easy to forget things like lights. Even if you don’t think you’ll need lights – because you’re planning on an early finish, perhaps – having them with you gives you options.

Occasionally a light will break, become lost, or run out of battery power. So it’s worth having a set of spare get-you-home lights, particularly for longer commutes. A couple of compact LED lights should do it, although for the front backup light a small head torch such as a Petzl E+Lite or Zipka is better still. If you need to fix your bike at the roadside, you won’t have to hold a front light in your teeth to see what you’re doing.

How far ahead does your front light enable you to spot trouble? Commuting in the dark is exhilarating: you seem to be racing down a tunnel of light. However, you want to be able to stop safely within the reach of that light. At 16km/h (10mph) a cyclist’s stopping distance is about six metres; at 24km/h (15mph) it’s 11 metres; and at 32km/h (20mph) it’s 18 metres. If the road is wet and you’re tired, you can at least double those distances. Fast, rural commuters need a really good front light!

The better you know your commuting route, the easier it will be to ride it in the dark. You’ll know where the potholes are in advance and can take evasive action early. Similarly, you’ll know about that slippery drain cover or off-camber corner. This knowledge is not a substitute for being vigilant, but it all helps.

Stay out of the gutter

It’s good practice in any case to ride at least a metre from the edge of the road, as you’re more visible there – being in a driver’s focus instead of his peripheral vision. That’s equally useful at night. Riding further out also gives you the option of going left if you suddenly spot a pothole or broken bottle in your path. (If you’re already up against the kerb, you can only ride over the obstacle – or stop.) If you’re further out, you’ve got a bit of wiggle room if a driver dazzles you; you won’t end up wobbling into the kerb or hedge.

Headlights on full beam will dazzle you worse than a car driver, as your lights are probably less powerful so you won’t be able to see properly for a moment even after the oncoming car has passed. You can’t flick your lights to remind the driver, like you would in a car. You can sort of flash your front light by waving a hand in front of it. That might make them dip. If not, look down at the road just in front of your front wheel; this works better if you’re wearing a cap, as that will shield your eyes.

With a really powerful front light, you might dazzle oncoming drivers. Resist the temptation to ‘see how they like it’; they might swerve in your direction. Some lights – such as Exposure’s Strada Mk3 – have a lower-powered ‘dip’ option. Otherwise, just shield the light with one hand.

Bad people are much rarer than the Daily Mail would have us believe. Nevertheless, there are some routes that you might use in daylight that you’d rather avoid at night - that unlit off-street cyclepath, perhaps, or that inner city underpass. Cyclists are less likely to be accosted than pedestrians, especially when travelling briskly and purposefully. But it can happen. You know your local area. If you’re in any doubt, stick to well-lit streets where there are other people about.

Maybe you’re working late or you decided to cycle into town to visit the cinema. Whatever your reason, if you’re leaving your bike anywhere at night, make sure it’s locked up – through the frame, to a solid piece of street furniture – somewhere well lit and in plain view. Thieves can work undisturbed in dark alleys.