How to stay upright when cycling on slippery roads

More rainfall in the autumn means less grip on the roads. Here's what to look out for and how to deal with it.

It's autumn: not just the season of mists but of slippery roads too. Cold snaps in October and November can mean patches of ice on your commute. But the bigger problem at this time of year is rain. Wet roads offer less grip, and can make it harder for cyclists to stay upright.

With less friction between tyres and tarmac, you're more likely to skid if you brake suddenly. You might even slide off if you lean the bike hard over on a high-speed corner. Bicycle tyres won't aquaplane like car tyres, but they can still lose grip. Tackier tyres with a softer rubber compound are used for racing. For commuting, the simplest solution is to put more rubber in contact with the road. That requires tyres that are wide enough to be run a bit softer without pinch puncturing. Even a switch from 23mm tyres to 25mm should enable you to drop the pressure by 15psi (about 1bar). Wider tyres can be run softer still, although there is a trade off with rolling drag.

Wet tarmac isn't too troublesome in itself, so long as you keep your speed under control. The real danger from rain is the way it lubricates surface hazards.

Small amounts of oil, petrol and diesel are often spilled by vehicles pausing at junctions. In the dry, you won't notice this. Rain after a dry spell lifts petrochemicals to the surface in a wet sheen, making patches as slick and as hard to see as black ice. (Persistent rain, meanwhile, will wash these slicks away). The risk comes when you're starting to turn at the same point where any oil-dripping vehicle paused. Roundabouts are the worst: slow right down and turn gently and gradually.

Dry leaves aren’t inherently risky to cyclists.The risk is in the fact that you don't know what's underneath – a pothole, perhaps. Wet leaves are a different kettle of fish. They can slide your front wheel out from under you like banana skins.

Wet leaves collect in the gutter, where you won't be if your road positioning is good. But if there are lots of trees or if the surface isn't 'swept' often by the swoosh of passing car tyres, you can encounter layers of leaves even if you're 'taking the lane'.

Treat wet leaves the same way you’d treat cycling on ice: keep going in a straight line and don't try to steer or brake on top of them. Freewheel or pedal lightly, so that you won't spin the rear wheel. 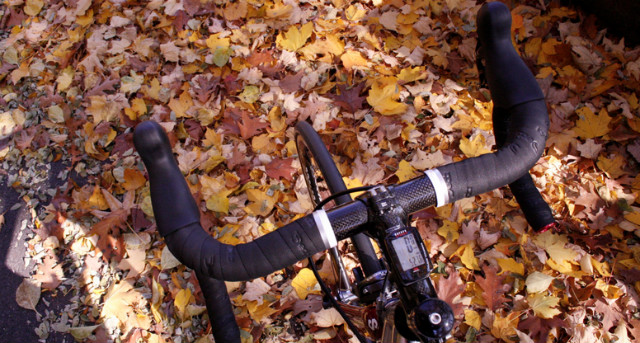 In the countryside, expect mud or gravel on roads that pass farms and field exits. In town, look out for them near construction sites and roadworks. Mud and gravel also get washed onto roads from verges when it rains heavily. As with wet leaves, if you can't avoid the detritus, aim to travel over it in a straight line without braking. If your bike has fatter tyres, you'll roll straight over. If your bike has narrow tyres and/or small wheels, it's easy to lose balance if the tyres dig into mud or slew sideways in the gravel. Scrub off speed before you hit the mud or gravel and get your bodyweight back, rising up and back on the pedals so that you ride as lightly as possible over it.

Wherever trams share space with cyclists, there are cyclists with bruises and broken bones. Steel rails embedded in the road are extraordinarily slippery when they're wet. What's more, the gentle curves of the tram lines don't match the angular grid of the streets, so you may find yourself approaching rails at an acute angle - or even starting to turn while you're crossing a rail. Do not do this. You will fall. Check behind for traffic, then alter your direction so that you cross the tramlines at a perpendicular angle. 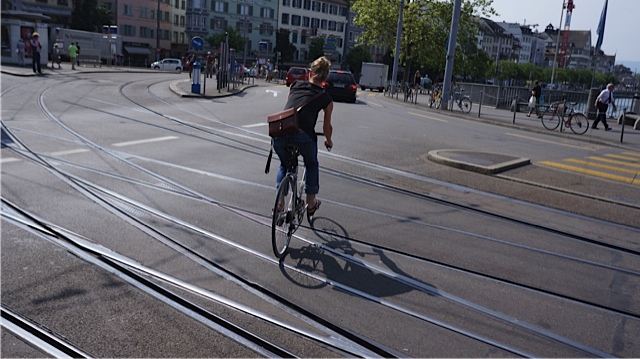 Do not brake or turn as you cross the rails. Wider, lower pressure tyres are at less risk on tramlines as the bigger 'footprint' is less likely to sit solely on steel. Wider tyres are also less likely to drop into the gaps between rails and tarmac if you get your angle of approach wrong. Railway level crossings present the same hazard as tram tracks and should be dealt with in the same way. If there's a rubberised surface to either side of the rails, be aware that this will also be slippery when wet.

It's not just tram tracks: any time there's a steel, rubber or plastic feature embedded in the road, the traction under your tyres can change from 'lots' to 'zero' if you ride over it on a wet day. Drain covers are the most common. As with other slippery hazards, if evasion isn't an option you should ride over a drain cover in a straight line, as perpendicularly as possible, without braking; if you're turning on the drain cover, you may fall. Cat's eyes and road studs at a pedestrian crossing can be just as slippery, although being smaller they're easier to avoid. 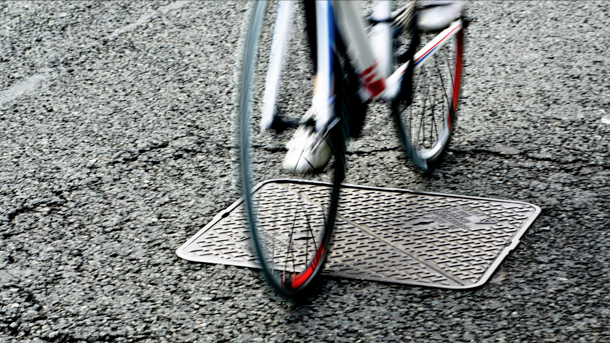 Painted lines on the road and shiny tar sealing lines around road repairs are smooth compared to the surrounding tarmac. That means less traction. It's not like the difference between tarmac and wet steel but it could still be enough to make you fall. Don't bank the bike over in a high-speed turn and don't brake hard while crossing these slicker surfaces. Either could make one or both wheels wash out. Slow down, ride straight, or stick to the untreated tarmac.