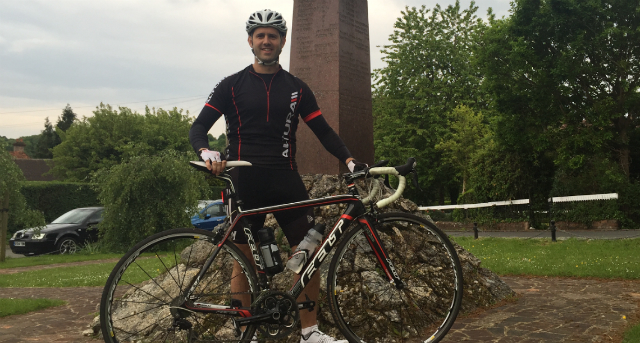 Ever wondered how your commuting experience differs to others? Each month we share the story of a real Cyclescheme cycle commuter and ask them seven questions to sum up their experience from their two-wheeled commute. This month, it's Darren.

This month we caught up with Darran to see how his commute has changed his life.

Darran: I live in Amersham in Buckinghamshire.

Darran: I used Cyclescheme to get my first road bike in 2009 and once I had finished that scheme I wanted to get a better bike once I had the cycling bug good and proper.

Darran: I got a Felt F5. It’s a carbon fibre road bike and was the best bike could get for the money that suited my height and size.

Darran: I commute from Amersham-on-the-Hill in Buckinghamshire to Ealing in West London. It’s 21 miles each way and takes about an hour on the way in and an hour 15 mins on the way home (extra 15 mins for the ‘on-the-hill bit’!!). My route in to work is as direct as I can get it on the roads and takes in lovely hedge lined country lanes and through towns and villages, even past an airport. The route home often involves a detour in the lighter evenings to squeeze in a few extra miles on the Chiltern Hills to keep my climbing legs sharp for the weekend sportives.

I literally can’t get enough of being out on my bike. I feel fitter, healthier, sharper and don’t get anywhere near as worked up or stressed out as I used to. In August 2013, I weighed 90.1kg. I’m now 81.0kg. That’s almost 10kg lost in 18 months. Not from placebo-effect tablets or fad diets but doing something I love. I feel great and I am in the best shape of my life. I can climb like Contador and sprint like Cav (not quite on either front but you get the idea). Not sure I have saved money exactly, just reallocated the petrol money to buying cycling stuff! Does mean I have loads of really good stuff though and my wife and family never really have to think too hard for ideas for Christmas and birthdays. I’m sure I will save money at some point soon…. when I’ve run out of new cool things to buy.