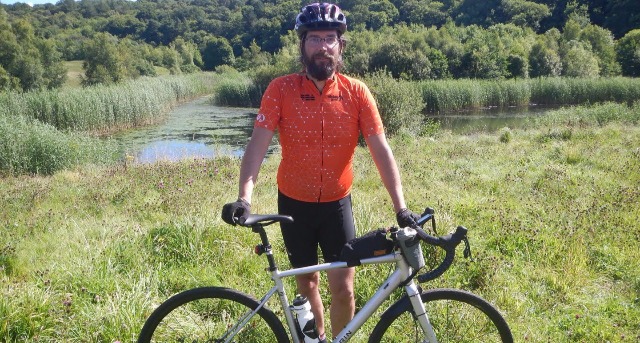 Ever wondered how your commuting experience differs to others? Each month we share the story of a real Cyclescheme cycle commuter and ask them seven questions to sum up their experience from their two-wheeled commute. This month, it's David.

This month we caught up with David to see how her commute has changed his life.

I was fed up with sitting in traffic jams, and wanted to find a way to fit some exercise into my commute into work. I was also hoping that if it worked out I could ditch our second car - I figured it's one thing I could do for the environment.

My first bike was an Avanti Giro 1 road bike, as I thought roads were the way to go to get in to work quickly. At the start of 2017 I got a Marin Gestalt 2 gravel bike so I could get off the roads and onto tracks more. I wanted to have a bit less traffic and a bit more nature in my commute and was prepared to gain a few minutes of travel time to get it. I'd really like a Brompton as well, so maybe that's the next one?

The Avanti was £800 in total with shoes, pedals and other accessories to get me started. The Marin was £1,000 as I wanted to get the best bike I could within the scheme

I probably average three times a week - some weeks it'll be every day, some weeks it may be just one day. The only weeks I don't commute are when I'm on holiday.

I start up in the hills above Blaydon, cross the River Tyne and then through Newcastle and on to North Tyneside where I work. It's around 17-20 miles each way depending on the route I take. My current route is largely off the road and mostly along the banks of rivers and includes a fair bit on the Coast to Coast cycle route.

I think I've got a bit fitter - I used to run a lot more, but cycling fits in better to daily life, so I do it much more than I ran. I've definitely saved money - even after the cost of the bike and maintenance, which maybe offsets the cost of the car I think the big saving is the cost of petrol I haven't paid.