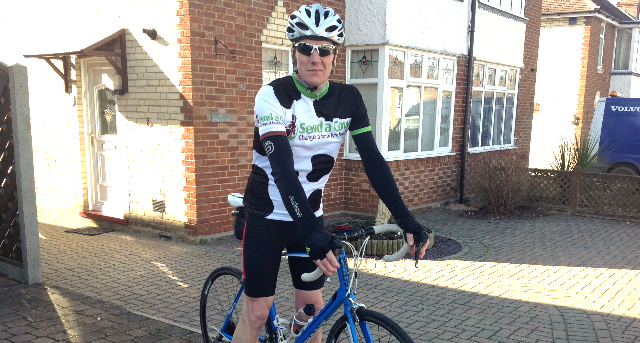 I live in the flatlands of East Anglia – home is around the racehorses in Newmarket and my work is at Cambridge University Vet School in the west of the city.

I was getting pretty disillusioned with the quite unreliable hourly train service from Newmarket to Cambridge which I caught with my Brompton for a few years (it’s over two miles from the station to where I work and there was no direct bus). Riding the total distance to work from home on a folding bike was hard work and uncomfortable (I did actually do it a couple of times!) and I was unable to resist the attraction of being able to pay for a tax free road bike spread over a whole year.

I had not bought a new bike for 20 years since I had been a student and had no idea where to start. Everything had changed. I took advice from a local bike shop which gave me the chance to test ride a few different bikes. I ended up choosing the Giant Defy 1 as it was amazing to ride and reportedly reliable and robust (I’m not a great mechanic!) I’ve had really little trouble with it and still love riding it.

I spent £1000 – roughly the price of the bike which I then got tax free and certainly less than the £1075 annual season ticket on the train.

I’ve ridden to work pretty much every day since April 2014 when I’ve had a standard day – though I have to go to London quite frequently and also have quite a lot of work in Africa (in Ghana and Ethiopia), so it hasn’t been every single day since then.

My commute is from the middle of Newmarket to West Cambridge – about 15 miles each way. I now know every rise, dip, bump, manhole cover and pothole on the route. 10 miles of it is on open road and 5 miles in in the city. Commuting has made me a convert to cycling; I joined a couple of local bike clubs a year ago and enjoy the occasional ride with others on a Saturday morning and the odd sportive (e.g. Prudential Ride London and the Velothon Wales) – I even did some time trials, quite slowly, in the summer). I’ve had occasional long week-ends in the Alps with friends which have been amazing and about as different from riding in East Anglia as you can imagine!!

When I started biking, I had been getting increasingly unfit and middle aged. I’ve got quite fit, though haven’t managed to shift my age. I’m quite greedy but have lost weight despite eating about twice the amount that I had been when catching the train. I’m now on my third winter and each one has got easier as I have progressively discovered (!) better cycling gear, better lights, overshoes and mudguards. The wind can sometimes be quite hard work in the open roads and having tight clothes makes a huge difference. But East Anglia is so dry that the rain is far less bad compared to the west. I am lucky in that I can shower at work and change quite easily, which means that bad weather (and when it’s hot in the summer) is much easier to deal with. I have so much more energy for everything now compared to a few years ago (although I was tired for most of the first 3 months after I started commuting until I got fitter). Great things about my commute are that it gives me thinking time and the journey home blows the stress of the day out of my head. Despite the extras I’ve bought, I’ve probably saved quite a lot of money compared to driving or catching the train, though we’ve had a bit of trouble with a flat car battery which wasn’t getting used enough!