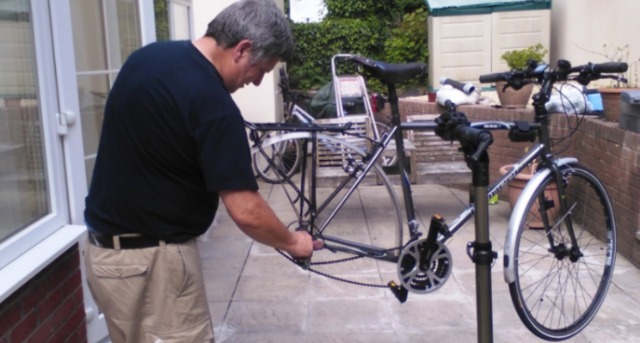 Ever wondered how your commuting experience differs to others? Each month we share the story of a real Cyclescheme cycle commuter and ask them seven questions to sum up their experience from their two-wheeled commute. This month, it's Keiron.

Each month we feature one Cyclescheme participant and share their commuting story. We ask the same seven questions (hence the name, The Cyclescheme Seven) in a bid to build up a picture of cycle commuters across the UK. From John O'Groats to Lands End we scour the country for the real cycle commuters who take to their bike each morning.

This month we caught up with Keiron to see how his commute has changed his life.

It was back in 2004, I was playing five a side soccer with some work colleagues, got knocked over, and struggled to get back up off the floor. At 17 stone plus I was way overweight, and decided then and there to do something about it. The company I work for was promoting Cyclescheme, so I thought I would give riding a bike a go.

The thought of riding a bike really excited me, I'd ridden a bike right up to my late teens, a mere 35 years earlier, but the memories of the freedom came flooding back, so yes I was ready to give it a crack. Sadly, things didn't go to plan, I missed the application date. That meant my first bike was bought outside Cyclescheme.

I didn't have a clue what to buy, but I remembered my last bike a real mongrel hybrid that my friends and myself had put together with pieces and parts scavenged from the local scrapyard had three gears. So I bought a Raleigh Clubman 3-speed. It cost £125, a bargain!

Initially, I just went out on local loops up and down the village, all around it in fact and found places I never even knew existed, bearing in mind we've lived in the village since 1988. This was really a period of gaining confidence on two wheels again, and I just loved it. The next step was to start part commuting too and from work, I was worried about the time it would take and getting sweaty, all the usual fears of a novice commuter.

Still riding my Raleigh Clubman 3-speed, I'd drive most of the way to my workplace, I started at a gentle two miles away, parked the car unloaded the bike, and cycled the remainder back and forth. It was so easy; I was soon parking 10 miles away. When I was confident of that distance, I decided to cycle to Neath park my bike at the railway station and ride the train the final ten miles to Port Talbot, where I work 12 hour shifts in a signal box.

The first day I got to the station, and was so confident I decided to cycle all the way and did no problem. I did this two, three times a week, then every shift in all sorts of weather. Despite numerous punctures, my own entire fault, ignorant of tyre pressures etc., and any kind of maintenance at all, that was to change in the next phase of continuing to commute.

The following year, 2005, I was able to join Cyclescheme, and purchased a Carrera Subway 8, with an internal hub gear. This was a very unhappy experience and sadly Halfords staff were unable to help with the problems I faced and we came to a compromise, they gave me a Subway 21 instead, but allowed me to keep the Subway 8, which is in pieces in my shed waiting for me to rebuild it. The Subway 21 was a revelation for me the extra gears made the hills a lot easier for me, especially my bete noir at Aberdulais en route to work. When I first started my commute, I'd often have to stop and walk up that hill. Please understand most experienced cyclists would have little problem with that short sharp incline but I always dreaded it.

The Carrera Subway 21 was terrific and improved the quality of my commute no end.

That year I went for £700 buying the Subway and cycling gear, lights, wet weather gear and pannier bags. The ensuing years, and there have been eleven in total, I have again used £700 to £1000, buying several bikes and loads of equipment.

I really need more space to keep them all, even though we put up another shed in the garden.

Usually three or four times a week depending on my shifts, but I do not ride when there is ice on the ground. This is the only negative experience I have had riding, I have come off three times on ice, and at 67 now and still working I have to look after these older bones.

Glynneath at the top of the Neath valley to Port Talbot Panel Signal Box, approximately 20 miles each way.CS: How has cycling affected your daily life - do you feel healthier? Have you saved money?

It has been a fantastic adventure and continues I hope for many years to come. I feel happier, healthier and more contented. It's amazing how the ride de-stresses and gets all the right things going in your mind. There is no doubt that I have saved thousands of pounds worth of petrol, and am doing my very small part in trying to make our planet that bit healthier also.

On top of that is the knowledge that everyday is different, sights, sounds, who you may come across, fellow cyclists on the road, and chancing upon fantastic wildlife. I've seen foxes in the countryside and in the middle of town, rabbits, badgers, one at McDonalds, herons catching huge fish from the canal, buzzards, hen harriers, peregrine falcons, hobbies. Perhaps best of all a mother otter carefully transferring her kits from one part of an unused canal to another, right outside a working coal mine. The following year I saw two young otters squabbling on the Neath riverbank under a bridge right in the middle of Neath.

With all this going on I tend to be a very leisurely commuter, if I see something I stop to have a good look, getting my phone camera out in time to record the scene is rarely achieved. But to have seen such things is truly special, the simple truth is without the bike and my commute I would never have seen them.

My advice to everyone is get out on a bike, even more so, if you have the opportunity to join a Cyclescheme where you work, give it a go you won't look back.

I think I've got a bit fitter - I used to run a lot more, but cycling fits in better to daily life, so I do it much more than I ran. I've definitely saved money - even after the cost of the bike and maintenance, which maybe offsets the cost of the car I think the big saving is the cost of petrol I haven't paid.