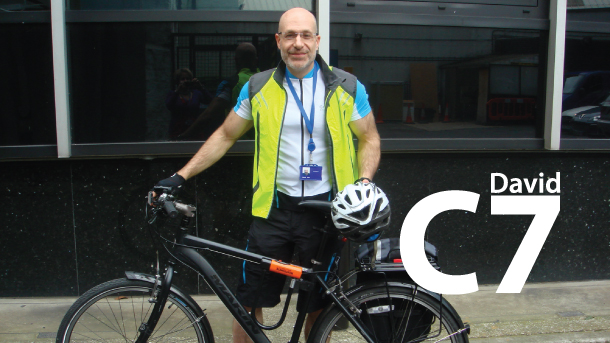 Ever wondered how your commuting experience differs to others? Each month we share the story of a real Cyclescheme cycle commuter and ask them seven questions to sum up their experience from their two-wheeled commute. This month, it's David from London.

This month we caught up with David from London to see how his commute has changed his life.

David: I live in Earls Court, which sort of west central London.

David: I had gotten seriously into exercise many years ago, but it pretty much took the form of weight training at the gym. I did not do cardio at all really. Then I had to have an angioplasty in 2006, and then a second one in 2010. For those that don’t know, it’s an operation done to clear your blocked arteries. My cholesterol levels were more than double what they should have been! At that point I decided that I had to do something to improve my cardiovascular fitness, not just toss weights around at the gym.

My company is an enthusiastic participant in the Cycle to Work Scheme, so I decided to use the programme to get a bike, simply for the purpose of riding it around my neighbourhood a few times a week to get a bit of cardio.

To be honest, I’d never been an enthusiastic bike rider, not even when I was a kid, and when I first got my bike I was kind of intimidated about riding it on main roads. Someone told me you could get free cycle safety lessons, so I booked myself in and that helped me get more comfortable. One Sunday, about a month after my operation, I decided to see how close to work I could get using my bike. To make a long story short, I cycled all the way to my office and then back again. It literally took hours because I was so out of practice and didn’t really know the route, but I figured if I could get there and back I could make the commute.

David: I was incredibly ignorant about different bike types so I was dependent on the recommendations of the retailer I went to. Luckily they were very competent and suggested I get a hybrid. I bought a Marin Muirwood, and I’ve been very happy with my choice. It’s not the lightest bike out there, which I sometimes have second thoughts about, especially when I’m cycling, as I often do, into a headwind, but I’ve turned this into an advantage, as I tell myself I’m getting an extra bit of workout because of the added weight.

David: One of my main concerns was that I would spend a lot of money and then become disinterested in using the bike and the accessories, so I was kind of conservative on what I bought. The bike, lock, helmet, a high vis jacket, lights, and one or two other bits came to £768. However, I rapidly discovered that I loved to ride, and I regretted not using the scheme to pick up a few other items, like jerseys, shorts, tights, a pannier, rack etc that I had to buy later but without the discount. Hindsight is always 20:20!

David: I started out with doing it two days a week and now I am up to four to five days a week in all weather situations except sub freezing temperatures.

David: From my flat in Earls Court, to work near Hoxton Square, which is basically on the eastern edge of central London, so I cross the city.

David: Feel healthier? I AM a lot healthier! My doctor says that my cholesterol is now ‘perfect’. When I started cycling it was taking me almost two hours to get from home to work. I’m now down to half an hour going, and 40 minutes returning because I take a longer route going home to get a longer workout. I’m also gradually getting leaner, which has always been a challenge for me. As far as the economic benefit is concerned, if you figure out that a weekly tube ticket costs almost £30, I have probably saved at least £2,000 since I started cycling to work.

For me, the proof of the pudding is when I recently had the good fortune to have tickets to one of the Olympic events. With all of the warnings about overcrowding on the public transport I decided to go on my bike. So, I cycled to work that day, then from work to the event, and then all the way home. I must have done about 30 miles that day, more cycling in one day than I had ever done before, or ever dreamed I would ever do! When I got home I was exhausted – but I also quite chuffed that I had actually accomplished it. I never would have been able to do this without the Cycle to Work Scheme!