The Cyclescheme Seven: what's your commute really like? (Tony) 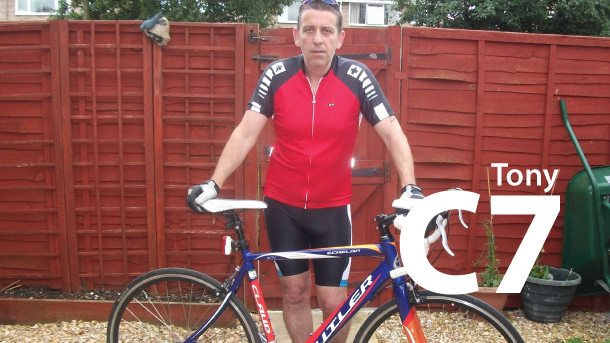 Ever wondered how your commuting experience differs to others? Each month we share the story of a real Cyclescheme cycle commuter and ask them seven questions to sum up their experience from their two-wheeled commute. This month, it's Tony from Wiltshire.

This month we caught up with Tony from Wiltshire to see how his commute has changed his life.

Tony: I am originally from Morecambe in Lancashire, but now live in Calne, Wiltshire.

Tony: My main motivation for getting a bike through Cyclescheme was initially the rising price of fuel (my daily commute is 30 miles). I was spending approximately £140.00 per month on diesel and was conscious that fuel prices were rocketing. Coupled with the fact that I was gradually gaining weight due to the lack of excercise as I reached my mid-forties, I saw the Cyclescheme poster at work and did the maths...

I weighed up the positives against the negatives and to be honest it was a "no-brainer". Taking into account the cost of the new cycle I worked out that I would technically receive a free bike and an extra hundres pound plus every month just by making the effort!

Tony: Having had no previous cycling experience since my teens, I was unsure which bike would be suitable for me. Having consulted colleagues at work and trying to purchase as versatile cycle as possible, I opted for a hybrid. I didn't want to start with a really expensive bike as I didn't know how I would take to cycling after all those years.  I therefore started with a Falcon Subway that cost a little under £200.00 coupled with the necessary accessories - helmet, lock, jacket and lights I spent £280.00 on my first Certificate.

After 12 months I opted to retain my hybrid cycle and entered into the Extended Use Agreement. I wanted to keep my options open if I wanted to cycle "off road" at the weekends. I then requested another Certificate as I was now aware which bike was more appropriate for my specific needs. I decided to get a dedicated road bike and opted for a Claud Butler Echelon. It cost £550.00 but the difference in performance was amazing. I cut 12 minutes off my jourey time due to the lightness of the bike.

Tony: I try to commute to work every single day. Initially I used to drive half way into work, park the car and then cycle the rest of the way. As my stamina levels increased I lengethend my journey. After approximately three months, I reached the point where if I didn't cycle, I would feel really bad. Sometimes the weather has made it quite interesting. I cycle in one morning early this year when the temperature hite minus 10!

Tony:I live in Calne, Wiltshire and commute to a village called Erlestoke where I work. It's a round trip of 30 miles. If I drove it would take me half an hour each way. I can cycle the journey in about 50 minutes now. As an addedd incentive I never overlook the fact that driving in and returning would cost me £5.00 in the car every day!

Tony: Cycling for me has been a revelation. I have loads more energy these days and tend to be up and about much earlier than previously. I don't recall being off work with any ailments since I began cycling and I have lost nearly 2 stones in weight. Taking into accoung the money I have saved, I have recently purchased my wife a bike too. Also, I am now nearer a 32" waist from a 36".