The Cyclescheme Seven: what's your commute really like? (Carolyn) 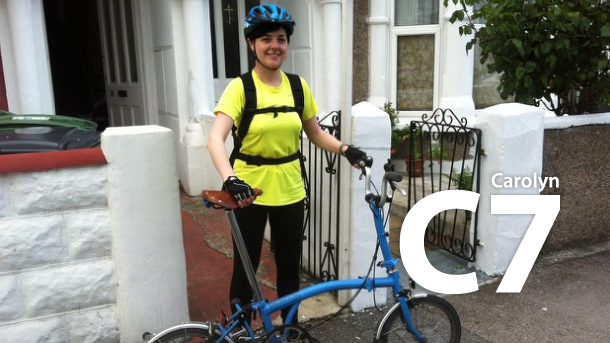 Ever wondered how your commuting experience differs to others? Each month we share the story of a real Cyclescheme cycle commuter and ask them seven questions to sum up their experience from their two-wheeled commute. This month, it's Carolyn from London.

This month we caught up with Carolyn from London to see how her commute has changed her life.

Carolyn: I live in Harringay, North London, and work in Egham, Surrey.

Carolyn: I just started a new job at Royal Holloway, University of London, and I needed a folding bike to take on the train for my daily commute as the trains get too busy to squeeze on a non-folder. I had used Cyclescheme in my old job and was really incentivised by the opportunity to pay in installments and save on the overall cost by doing it pre-tax.

Carolyn: I bought an M-type Brompton in Arctic Blue. Having borrowed a friend's Brompton for a few weeks to test drive, I was convinced it was the best model for the job.

Carolyn: I cycle from London N8 to Waterloo station, where I get the train to Egham. I then have a short additional ride to the Royal Holloway campus. The total return cycling distance is around 18 miles.

Carolyn: Before starting my new job I was really concerned about taking on a long commute, but I have really felt the positive effects. I regularly cycled to my previous job in central London, but it was often just too easy to leave the bike behind and hop on the tube. Now I get 90 minutes' exercise (and valuable thinking time!) each day, and I save money on underground tickets. My Brompton has become a truly treasured possession.