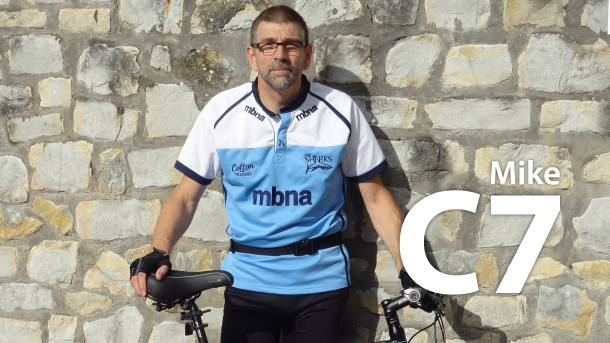 Ever wondered how your commuting experience differs to others? Each month we share the story of a real Cyclescheme cycle commuter and ask them seven questions to sum up their experience from their two-wheeled commute. This month, it's Mike.

This month we caught up with Mike to see how his commute has changed his life.

Mike: I changed jobs last year and my new Civil Service employer launched Cyclescheme just after I joined. Being able to spread the cost of the bike was an important factor and the tax saving helps too. I hadn’t cycled on a regular basis for over 40 years until around 4 years ago when I bought a low budget bike to see how I got on with it. Although serviceable I wanted to upgrade to something that would be better suited to my needs.

Mike: My bike is a Marin Fairfax hybrid with 24 gears and disc brakes. A colleague recommended a cycle shop in Clifton and of the 3 shops I visited they took the most interest in my riding habits, guiding me to a choice of two bikes. Marin have a good reputation for frames so I opted for that one as the rest of the bike can be upgraded, I’ve already changed the seat and fitted ergonomic grips.

Mike: In addition to the bike I bought lights (even in summer I need these for part of my journey under a tree canopy), mudguards, a lock, rack and panniers (much better than carrying my change of clothes in a rucksack) and other extras for a total of £927.

Mike: Commitments outside of work mean I can’t use the bike on Wednesdays but I aim to use it the other 4 days. On the days I don’t cycle I use a motorbike.

Mike: My preferred route takes in a couple of miles of A road which leads to a two mile climb on a country road which is also quite twisty, I enjoy the early morning scenery and have seen deer in the woods. Then it’s along an undulating B road and a descent to the outskirts of Bristol where I pick up cycle paths to the office at Lawrence Hill. It’s 12 miles each way and some evenings I take a longer way home. Aside from the cycle paths the traffic is fairly busy but I find most drivers give me plenty of room, although there’s always one or two who pass closer and faster than I feel comfortable with.

Mike: I initially thought of using the bike just for commuting but find I use it at weekends too. Recently I completed the Bike Bath 100 mile sportive to raise money for Sunshine Hospital Radio and while neither I or the bike are likely to go as fast as cycle club folk I was pleased to finish and am developing a cyclist’s suntan! My fitness level has improved dramatically, I'm the fittest I’ve been since I hung up my rugby boots, and have also dropped a trouser size in the last six months.

Commuting by bike saves me petrol money and building exercise into my routine means I no longer pay out for evening gym classes, which in turn means I get to spend more time with my wife including going on cycle rides together.

Some colleagues think that 12 miles is quite a distance to commute but once you get used to it you don’t even think about it. If someone had said to me 5 years ago that I’d be regularly cycling to work, deliberately incorporating a hill and taking the long way home just for fun I’d have said they were joking. Now I find that if I don’t cycle to work at least 2 days a week I really miss it.