The Cyclescheme Seven: what's your commute really like? (James) 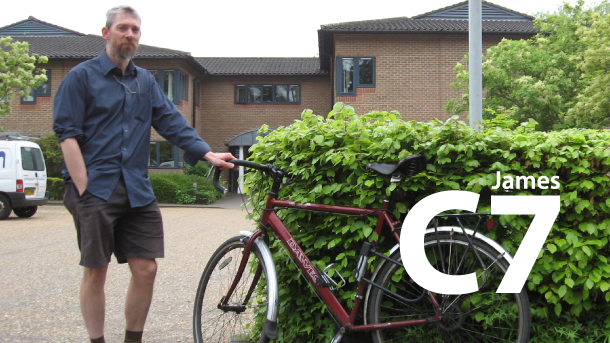 This month we caught up with James to see how his commute has changed his life.

James: Cambridge, the bike capital of East Anglia and possibly the UK; home to thousands of other bike-wielding students & commuters. It's flat, flat, flat from here to the Wash, so you don't have to change down from top gear unless the wind is up! We are so legion that car drivers are very bike-aware, and, dare I say it, tolerant in Cambridge. (OK, perhaps I go too far - just bike-aware...). It can get a bit boring, but head south and you are soon into the hills of Essex, or west to the wolds of Huntingdonshire / Beds.

James: In this instance, financial - my old bike (a Raleigh racer, 11 years old) broke suddenly/unexpectedly. (I was riding it when the bottom front part of the frame snapped...an ensuing, strange floaty sensation gave the game away.) I didn't have the cash in the bank for a new one, but as I'd just joined an employer who had advertised the scheme, I jumped at the chance. It didn't take long to pay off (and what you don't get in your take-away pay, you don't miss!). But there are other reasons too - it is one of the greenest things you can do if the alternative is a car, I count the cash I save, and I don't like cars or driving in traffic... it's a no-brainer!!

James: Nothing too fancy - I got an entry-level touring bike, a Dawes Vantage, and promptly put back on my old Brooks saddle (bliss). I've had racers and tourers before, and love the idea of holidaying around the country with full back panniers on B-road Britain, reliving the hostelling days of my youth. It works fine on Cambridge's flat roads & cycleways. Next time around, I may get a folding bike for trips to London or elsewhere by train.

James: All in all, a conservative £750 - this included a fair number of extras like a decent D-lock, back panniers, water bottle... it didn't include a single square inch of lycra, however...

James: Every day of the working week. No real exceptions apart from when thoroughly iced in - that's a work-at-home day. Snow is fine - ice is another matter. If it's really wet, or flash floods are likely, I wear wellies. And by spring / summer, all that hard work over the winter pays off, it's effortless and pleasurable getting around, especially in the backstreets of the city where cars struggle to get across town with all the one-way systems in place (or, according to Douglas Adams, have to reach a certain high enough escape velocity to get out of the ring road).

James: From my home in a rural village north of Cambridge, I go straight down and through the city centre, which is "pedestrian/bike only" near the market square - past many of the colleges, the Fitzwilliam museum, and then through to my place of work at the Addenbrooke's hospital site on the rural south side. I invariably take a more scenic, quieter route on the way to work, after escaping the city centre (in fact on part of the southern Cambridge guided busway path. As I write this, the Queen and Prince Philip are about to take the same route, but on the actual bus).

On the way back, though, I battle up through Cambridge the direct route, on the main Hills road, though there are plenty of cycle lanes all the way through and up. So in all, 9 miles there, and 8 miles back. It's never dull going through Cambridge city centre -  I've cycled through student demonstrations, past comatose next-day May Ball 'survivors', nearly bumped into the Dalai Lama crossing the road, had my photo taken by The Times (to do with banking crisis!!)...and of course, there are cycle shops a-plenty for any emergencies, I can walk to walk from the centre if need be. However, it's a relief to get back to the quiet of rural village life after coming back through! I should mention that the longer part of the guided busway has been a real boon to cyclists keen come in from north of the city to avoid crowded roads - the track is smooth, the countryside pleasant and the crossings few and far between.

I've cycled to and from work all my (working) life (23 years) so it's hard to know any different, but I certainly feel more sluggish in the day if I don't get on 2-wheels first thing. The exercise certainly gives me an excellent start and end to the working day, getting the juices going in the morning and then leaving behind work stresses in the evening. I'd never drive to work, it's far too stressful. There are so many de-incentives now in Cambridge for the motorist - tiny speed limits, higher parking fees, more and more traffic lights, traffic queues, ....shall I stop now..?

As for money - I've certainly saved money. I can't see how you can fail to save money if your alternative is car or train - and if to you "time is money", then it's saved that way too - you are simply traffic-jam proof (dedicated cycle lanes help).  I am guaranteed a more accurate 'arrival' time before I set off, punctures excepting. Also a  'direct' bus route to the hospital from a village near me, running on time, takes 20 minutes longer than I can cycle it. I do, however, have to have to refuel myself with a bigger packed lunch. A much bigger packed lunch...and eat it 2 hours earlier than I should...