Round Up: Carbon road bikes 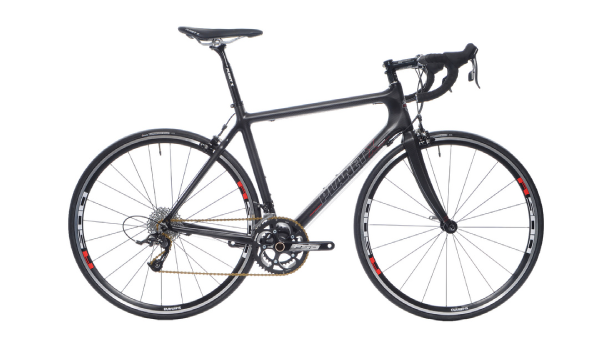 Every bike you'll see in the Tour de France this year is made of carbon fibre. It's the material of choice for professional cyclists' bikes because it's light and strong. It's also relatively expensive: even budget carbon bikes are more expensive than their aluminium or steel equivalents.

Every bike you'll see in the Tour de France this year is made of carbon fibre. It's the material of choice for professional cyclists' bikes because it's light and strong. It's also relatively expensive: even budget carbon bikes are more expensive than their aluminium or steel equivalents.

That's not because the fibre-and-resin mix that makes up carbon fibre is expensive in itself, although it does come in different grades. It's because it's a labour intensive process to get from raw material to finished frame. Carbon fibre has to be painstakingly layered in the mould by hand before being 'pressure cooked' into shape.

Carbon fibre can have a better strength to weight ratio than any metal. Its properties depend on how the fibres are aligned and bound in epoxy. Like wood, carbon fibre has 'grain'; unlike wood, the designer chooses the direction of the grain. Thus the frame can be made super stiff in places – around the bottom bracket, for example – and resilient in other areas, such as the seatstays.

Carbon fibre is best suited to bike types that put low weight at a premium, such as road racing bikes and cross-country mountain bikes. Low weight means quicker acceleration, better climbing, and slightly better manoeuvrability. Carbon fibre is not so well suited to town bikes or touring bikes, where dependability is more important than weight. It's not that carbon fibre is fragile; it isn't, and it doesn't fatigue either. But when it does break, it breaks catastrophically. There are no slightly bent carbon fibre frames; they're either fine or broken.

A minority of carbon frames and forks have fittings for full-length mudguards, while hardly any will accept conventional pannier racks. It's logical enough: if you're buying a bike whose chief advantage is low weight, it doesn't make sense to weigh down the frame. For commuting, plan to travel light and fast on a carbon bike. You'll get more out of this kind of bike if you also enjoy long, lycra-clad rides at the weekend – or racing.

As the carbon frame and fork will absorb a good chunk of a £1,000 budget, the groupset may be a tier or two lower than what you might get on an aluminium bike at the same price. Expect Shimano Sora rather than Shimano Tiagra or 105, or Sram Apex rather than Sram Rival.

Regardless of what the groupset is, do look for (or specify) a wider range cassette if you'll be tackling hills; small cassettes only suit racing, which will be small comfort when you find yourself walking up a Peak District hill on that 100-kilometre summer sportive.

Wheels may be traditional 32-spoke ones or budget 'factory' wheels with fewer spokes and semi-deep section rims. Either is fine. Just don't look to lose a few hundred grammes from your wheels if you could lose 10 kilos yourself; it will end in broken spokes. Tyres will be 23mm or 25mm training tyres, chosen in part for their economical price. Upgrading them will provide better rolling performance or puncture resistance.

Finding a carbon fibre bike for less than £1,000 in a bike shop is difficult. At this price, expect to buy online from a direct seller and have your bike delivered to you in a box. Like bricks-and-mortar shops, good online shops enable you to get a bike via Cyclescheme. Look for the Cyclescheme logo.

The benefit of a buying a bike online is that it's cheaper. The disadvantage is that you won't get the same hands-on help a local shop could provide. So you need to be clearer about exactly what bike you want, and exactly what size you want, before you buy. You'll also need to do some simple spannering to get the bike ready to ride. If you're okay with that, here's a sample of the bargain-priced carbon bikes available. 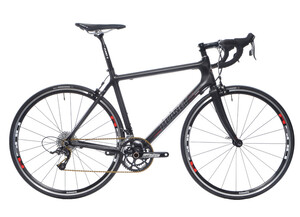 It's a full carbon road bike weighing in at only 8.1kg in the large size, and it's equipped with a full Sram Rival groupset: 20 gears, with a 34/32 bottom one that should scale any hill. The Planet X branded 32-spoke wheels (not pictured) will endure the daily grind better than those of many road bikes. It's nice to see crank length, bar width and stem length keyed to the size of the bike. A women's version is available. Planet X also do a carbon cyclo-cross bike and a carbon flat-bar road bike for less than £1,000. 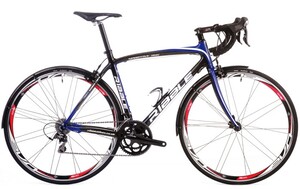 Ribble do a range of carbon fibre bikes. This one is unusual in that it comes with mudguards – great news for commuters! These haven't just been squeezed in either: deeper drop brakes (57mm) provide safe clearances. The Sportive 365's taller head tube gives a comfortable riding position that's more recreation than race. By default, it comes with 18-speed Shimano Sora gearing and Rodi Airline 4 wheels. But if you're prepared to spend a little more, you can customise the specification using Ribble's online 'bike builder' tool. 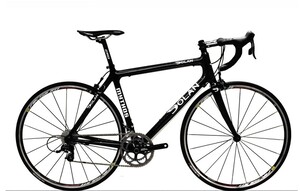 This carbon road bike is inexpensive enough that you could include accessories as part of the package and still spend less than £1,000 – although at time of writing, the Mythos was only available in the smallest size. There are a la carte options for selecting cranks, cassette, handlebar, wheels and more. Ordinarily it comes with 18-speed Shimano Sora gearing and Shimano-hubbed Mach 1 Omega wheels. The head tube is tall enough for recreational riding, although you can't fit mudguards expect for the likes of Crud Roadracers and SKS Race Blades.