Round Up: Folding Bikes 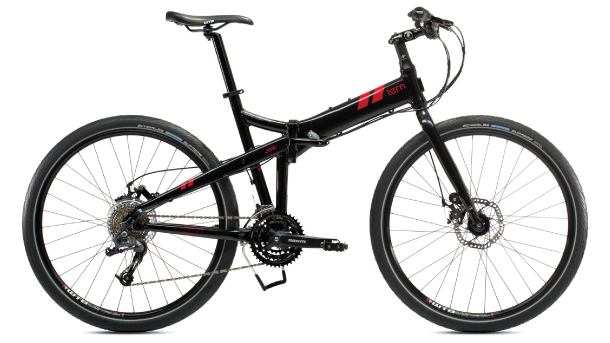 What folding bikes do best is mixed-mode commuting: you can take the train or car part way to work, then cycle the last few miles. When your bike collapses to the size of suitcase, you don't have to worry about whether you're allowed to take it on such-and-such train, or if it will fit in the back of your car.

What folding bikes do best is mixed-mode commuting: you can take the train or car part way to work, then cycle the last few miles. When your bike collapses to the size of suitcase, you don't have to worry about whether you're allowed to take it on such-and-such train, or if it will fit in the back of your car.

Folding bikes are also much easier to store. If there's no cycle parking at work, a folder may be able to go indoors. Likewise if you live in a flat: instead of chaining your bike to railings, where it's at the mercy of weather and thieves, it can go through the front door and be stashed under the coatrack or in a cupboard. With the most compact folders, you don't need a lock at all: where you go, the bike goes.

Quite how small and neatly you need the bike to fold will depend on what you want to do with it. Any bike that folds in the middle will fit in a car boot. If you board a packed commuter train every day, it's easier with a bike that's small enough to slot in between the backs of seats, like a Brompton. Rail regulations say that luggage (including a folded bike) can be refused if it’s bigger than 100cm in any dimension and charged for if bigger than 90x70x30cm. In practice, this is seldom enforced and any folding bike that fits in an end-of-carriage luggage rack will be admitted.

Folding bikes weigh about the same as non-folding bikes. However, all that weight is in a compact package that you'll be carrying with one hand, so stairs and long platforms can be a struggle. If the bike can't be rolled along when folded, unfold it and wheel it. Most folders take less than 30 seconds to fold or unfold – good news if you cut it fine when dashing for a train!

All folding bikes compromise between folded size and ride quality. Do you want a folder that rides like a conventional bike and that you'll only fold occasionally, or do you want a marvel of metallurgical origami that you'll fold and unfold a dozen times in your commuting day? These priorities will largely determine the wheel size you need.

Big wheels roll more efficiently and steer more surely, especially on rough surfaces, but smaller ones take up much less room. Mountain bike sized 26-inch wheels give a 'big bike' ride but a bulky fold; 16-inch wheels allow a tiny fold but are suited better to short urban journeys than longer rides. Tyres make a big difference to a smaller-wheeled folding bike's performance. Use efficient ones - Schwalbe have a good range in smaller sizes - and keep them properly inflated.

By definition, there are one or more hinges in a folder's frame. The simplest is a hinge in the middle. More compact folds are possible by tucking the rear wheel underneath, folding down a long stem, and lowering a long seatpost. Most hinges allow a little flex when the bike is being ridden. Be sure they're tight.

Gearing requirements will depend on the hills you have to climb and the distances you're riding. Singlespeeds are light and durable but only really suit short hops across flatter towns. Derailleurs give more range but a folding bike's convoluted cable runs can compromise shifting performance if you neglect maintenance. Internal hub gears are a good compromise.

As most folding bikes are used for utility journeys, it makes sense to invest in practical accessories. Mudguards are must. Luggage provision means you won't have to carry loads on your back. Integral lighting means you can ride anywhere, anytime – although, unlike a conventional bike, you can always take a take a taxi with your folder if the lights fail, or if it suffers any other mishap. 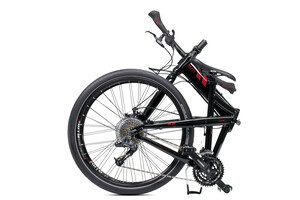 This is an aluminium hybrid with 26-inch wheels that happens to fold in the middle. You lift the safety catch, undo the hinge, and fold the frame back on itself, with the front wheel staying pointed forward. It takes five seconds. You can also lower the saddle and turn the handlebar to get the folded size down to 92x85x32cm. Unfolded, it's a normal bike with 24-speed derailleur gearing and cable-operated disc brakes. Its 50mm tyres make light work of bad roads. You can fit mudguards and a rear rack. 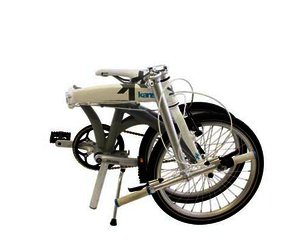 This bike also exists as the 1twenty and 9twenty: the names give you the number of gears and wheel diameter in inches. This one uses a Sram T3 hub gear, which offers ample range for city riding. Twenty-inch wheels combine with a generous wheelbase and a solid-feeling, fold-in-half hinge to offer a good balance between ride quality and folded size. It packs down to 83x68 x44cm yet can be ridden at pace without noticeable flex. Mudguards and a rear rack are available. 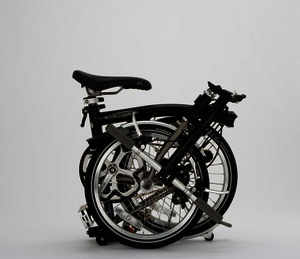 The Brompton is the quintessential British folding bike. It folds cleverly and quickly into a tiny package just 60x58x29cm, with the oily chain hidden inside. There are castors for rolling the folded bike into tight places. Handling is better than you'd think for a 16-inch wheel bike, especially on this sportier S version, which has a longer reach to the handlebar. This model has a 2-speed derailleur. Others with 3- and 6-speed gears are available, as are lots of a la carte options and accessories – including an excellent front luggage system.