Round Up: Road bikes with disc brakes 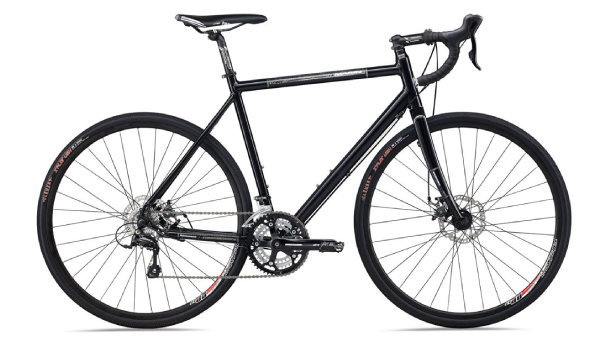 Sporty road bikes with drop handlebars traditionally use sidepull calliper brakes, which operate on the rim. These brakes are lightweight, inexpensive and quite powerful. But they're not without drawbacks, particularly for commuters.

Sporty road bikes with drop handlebars traditionally use sidepull calliper brakes, which operate on the rim. These brakes are lightweight, inexpensive and quite powerful. But they're not without drawbacks, particularly for commuters.

Water, snow or mud on the rims compromise a rim brake's performance. A wheel that gets buckled by a pothole will rub or jam against the brake. Clearance for a fatter tyre and/or a mudguard is limited by the length of the brake calliper. And the wheel rims will be gradually worn away by the brake pads, until they crack and fail. Disc brakes solve all of these problems.

Mountain bikes were the first bicycles to adopt disc brakes, and discs are now the norm on better quality MTBs. Cyclo-cross bikes followed suit; discs are common on 'cross bikes. Now it's the turn of bikes that are not habitually ridden in mud: road bikes.

There are essentially two types of disc brake: hydraulic and mechanical. Hydraulics, which use fluid-filled hoses, outperform mechanicals, which use steel cables. Apart from new pads now and again, hydraulics are almost fit-and-forget. Ideal for commuting! Or they would be if the drop-bar versions weren't brand new, solely top of the range, and eye-wateringly expensive. Mechanical disc brakes offer many of the same advantages at a more wallet-friendly price. They are what you'll find on road bikes costing £1000 or less.

Many of the road bikes available with disc brakes are cyclo-cross-inspired commuters. Some simply are cyclo-cross bikes, often marketed as do-it-all bikes. A bike designed for road use should have some differences from a bike designed for off-road racing. Look for: a lower bottom bracket, so you can get a toe down at traffic lights; eyelets for mudguards and a rear pannier rack; a rear disc calliper mounted on the chainstay instead of the seatstay, to make it more practical to fit said pannier rack; and smoother, tarmac-friendly tyres instead of knobbly ones.

The tyres will be wider than those you'd find on a traditional road bike, anywhere between 28mm and 37mm rather than 23-25mm. Partly that's the cyclo-cross heritage. Partly it's because a fork designed for a disc brake has to be sturdier and less yielding to prevent it cracking; without a fatter tyre, you'd feel more vibration transmitted through the handlebar. The impact of fatter tyres on speed is fairly minimal, and the trade off is improved comfort, handling and reliability on potholed roads – or off-road altogether.

Gearing on a bike intended for road use may well be slightly higher at the top end than that of an off-road racer, with a 50-39-30 road triple chainset or 50-34 compact double in place of a 46-36 double. That's fine so long as the bigger top gears don't come at the expense of lower gears, which are just as useful for riding uphill on the way to work as they are for slogging through mud.

The brakes will be mechanical discs engineered to work with the smaller amount of travel a drop bar brake lever has compared to a flat bar lever. Unlike hydraulic brakes, where it's normal for both pistons in the brake to move towards to the disc rotor, in a mechanical system only one piston usually moves. That's okay; it just means more tinkering to set up the brakes initially and to adjust them as the pads wear. This is easiest if you can adjust the position of both pistons independently. Avid BB7 brakes allow this; others don't. But it's a simple adjustment for your local shop to do if you're not comfortable with it.

Here's a few of the road bikes with disc brakes currently available. More are coming. 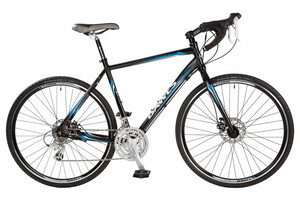 Less a budget cyclo-cross bike, more a hybrid with a drop handlebar, the all-aluminium Discovery Road Sport 2 lacks only mudguards and a pannier rack to turn it into a commuter – and it will take both. The 35mm Schwalbe CX Comp tyres will soak up cobbles and potholes well, but easier rolling touring tyres in the same width would be a worthwhile upgrade. Gearing is entry-level STI: 24-speed Shimano 2300, with a road triple chainset providing a reasonable range. The discs are Shimano R515, a new-for-2013 brake that's a step up from entry-level. For heavier commuters, 36 spokes per wheel is useful insurance against breakages. 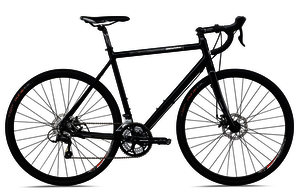 Marin call the Lombard an 'urban cross' bike. The rear disc calliper is on the chainstay, like the Dawes above, so it won't interfere with a pannier rack. The plush 35mm Clement X'Plor USH tyres are more multi-use than most 'cross tyres, as they have a centre rolling strip that will stop them buzzing and dragging on tarmac. The fork has carbon fibre blades, which saves weight, while the aluminium frame has Scotchlite decals on it to stand out in headlights. Gearing is 27-speed Shimano Sora with a road triple. Brakes are utilitarian Promax DSK 715. 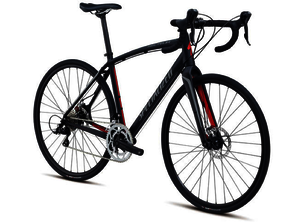 A taste of things to come, this Specialized Secteur is not a cyclo-cross derivative but a sporty road bike that happens to have disc brakes. Like the other bikes in the Secteur range, the Sport Disc is aimed at longer distance comfort. To that end, it has a taller head tube than a race bikes, a full carbon fork, a carbon seatpost, 28mm road tyres, and a shallow-drop handlebar. An 11-30 cassette combines with a 34-50 compact double to give the 18-speed Sora gearing as wide a range as most bikes with road triples. The big difference from its Secteur stablemates is the braking: it uses Avid BB5 discs. There's room for mudguards.