Round Up: Women's Road Bikes 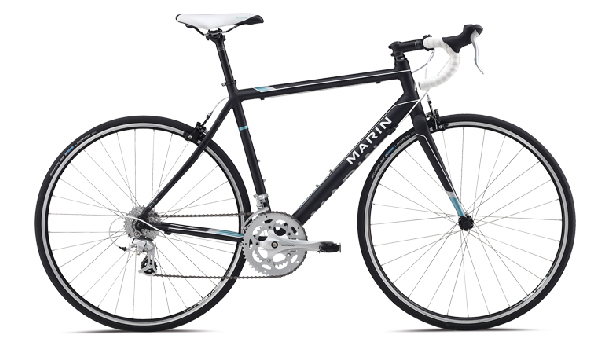 Women's road cycling is finally starting to attract the attention it deserves. There's was a women's tour in May this year. And because more women are taking up recreational road cycling, there are more women's-specific bikes available now.

Women's road cycling is finally starting to attract the attention it deserves. There's was a women's tour in May this year. And because more women are taking up recreational road cycling, there are more women's-specific bikes available now.

Do women need different bikes from men? Sort of. It's a myth that women have longer legs and shorter torsos than men. But there are obvious differences in the pelvis and less obvious ones in how the different genders tilt it when sitting comfortably on bicycle saddle, and these mean that women tend to happier with the handlebar closer and/or higher than men of the same height. A wider pelvis means wider 'sit bones', so women are generally more comfortable with a wider saddle too.

The big difference between men and women, in terms of dimensions, is simply that women are generally smaller. Narrower shoulders and shorter arms demand narrower handlebars – perhaps 38cm rather than 42cm – with a shallower drop. Shorter legs require shorter cranks – 165 or 160mm rather than 170mm. Smaller hands need reach-adjustable brake levers to put them in easy reach. And with less brawn overall, many women might be happier spinning easier gears than mashing big gears.

Some of these features come as standard on women's-specific road bikes, although gearing and crank length often leave something to be desired. To an extent, all of these features can be added to a gent's or unisex bike to make it more female friendly. Taller women especially may find that they can comfortably ride so-called men's bikes with minimal modification. Short women, on the other hand, may find that even women's-specific road bikes have 'lazy' steering or toe overlap with the front wheel. That's because the frame will be much smaller but the wheels will be the same size, so there's less room for them. Short women should consider other options as well as 700C bikes in XS size.

In terms of what to look for in a women's road bike: the first thing is a top tube (or crossbar). Step-through frames are for those with limited mobility or those who want to ride in a skirt (or kilt?). They're not women's-specific.

The frame will most likely be aluminium, with a fork that's either steel (cheaper) or part carbon-fibre (lighter, more expensive). Some bikes claim to have comfort-enhancing frame features, such as narrower or curved seat stays. These can help a bit, but not as much as swapping the tyres from 23mm to 25mm or from 25mm to 28mm. Not all road bikes can be fitted with wider tyres, however, especially if you also want to use mudguards. If you do, look for threaded eyelets by the frame and fork dropouts and also for brakes described as 'deep drop' or 'long reach'. These have a longer calliper – 57mm rather than 49mm – so there's more room to fit a mudguards without them skimming the tyres.

The gears will have 8, 9 or 10 sprockets at the rear wheel and 2 or 3 chainrings at the front – a double or triple respectively – operated by integrated brake/gear levers. More gears isn't inherently better, but Shimano's groupset hierarchy does in fact track the number of sprockets at the back: 8-speed (2300 and Claris) is cheaper, a bit heavier, and not as slick-shifting as 9-speed (Sora), while 10-speed (Tiagra, or 105 if you're lucky) is better again. More gears doesn't mean more range either. To make hills easier, you want the smallest chainring and biggest rear sprocket combination you can get. On one road bike, the easiest gear might be 42 front/28 rear (bad); on another, it might be 30 front/32 rear (good).

Giant offer an Avail to suit most pockets, from £499 to £999 – or up to £2999 for the nicest carbon version! All are designed as endurance road bikes, so are more for recreational riding than racing. Frame geometry is scarcely different from the equivalent-sized men's Defy, but that's not a problem. Contact points – saddle and handlebar – are different, and the stem seems shorter. The Avail gets a feature the Defy lacks: auxilliary brake levers that you can operate from the bar tops. These are useful if you're new to drop handlebars or don't habitually ride with your hands on the brake hoods. Gearing is Shimano Sora, with a 50-34 double at the front and sprockets that go up to the 32 at the back – a worthwhile improvement. Giant-branded wheels and 25mm tyres are fine, but you'll need specialist mudguards to go under the short-reach brakes.

There are small geometry differences between the men's and women's Synapses. The main difference is the sizing range: it goes smaller for women, bigger for men, which makes sense. Handlebar, saddle and stem are the primary component changes. The aluminium frame and carbon-bladed fork have what Cannondale call 'Save Plus' technology; they're profiled for slightly improved shock absorption. Cannondale use a narrower diameter seat post too, which will definitely help. The gearing is Shimano Tiagra: 34-50 at the front and 11-30 at the back, and the levers are easily adjustable for reach. It's one of a fairly small number of road bikes to use 57mm brake callipers, so it can readily be equipped with mudguards for commuting.

The initials WFG declare that Marin's new, entry-level women's road bike has Women's Fit Geometry. In fact, it has components selected to suit women; the frame numbers are identical to the equivalent sized gent's bike. But it's none the worse for that, with a tallish head tube and shallow-drop women's handlebar giving a less stretched riding position. The fork has carbon blades, while the seat stays are meant to reduce road vibration. Gearing is Shimano Claris, with a 50-34 double up front and an 11-30 cassette at the back – a reasonable spread of gears. The 25mm Schwalbe Lugano tyres have some puncture resistance. The best option for mudguards for would be SKS Raceblade Long ones, as clearance is limited by the short-reach brakes.