Round up: Budget hybrid bikes 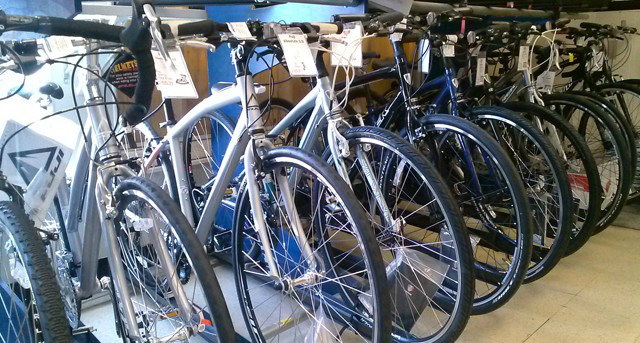 A cheaper bike with less-costly-to-replace components could be just the ticket for your daily commute.

Out in all weathers and all seasons, drenched in rain and slush, sitting all day covered in the mud or dust of the morning commute – and that’s just the rider. At the other end of the day, who wants to stand out in the dark and freezing fog, hosing the detritus from their bike? Instead, it is thrown into the dark, damp shed with a corrosive coating of local authority road salt as its only blanket. A thick coating of chain oil might keep out the worst but that brings its own hazards as it mixes with grit and grime to form a grinding paste that chews through chains and sprockets. In the face of all this, it’s a wonder any bike lasts more than a year!

Given all that, you might be thinking, what is the point of spending a lot of money on frames and components that will inevitably die a sad, cruddy death? The answer might be – none at all. If you are in the position to run more than one bike, then it might make more sense to make your commuter the sacrificial lamb that saves your blingy bacon. And this is where the budget hybrid comes in.

There’s a certain – and undeserved – snobbery about hybrid bikes. Jack of all trades, and all that. The fact is, though, that for many, many people a hybrid is exactly the kind of bike that would suit their needs. In fact, hybrids cover a whole range of bike types, from chunky mountain bikes shod with lighter tyres to lightweight, flat-barred road bikes that can give their drop-barred brethren a run for their money. Depending on the nature of your commute, something along this spectrum is going to hit the spot.

Bikes in this £300-£400 price area tend to use tried-and-tested 7-speed transmission technology. It may be old fashioned but it tends to work reliably, even when gear cables are getting gritty and corroded (up to a point). When it does wear out, it’s relatively cheap to replace. On 700C-wheeled bikes, such as those reviewed here, a 28/38/48 touring style triple chainset is the typical companion, and the bike may come fitted with V-brakes, or basic cable-operated discs that add weight but offer consistent stopping in wet weather.

One thing to avoid on a budget-priced hybrid is a suspension fork. These add a lot of weight for negligible improvement in comfort and after a year or so of neglect and salty roads will probably seize solid anyway.

Bearings, bottom brackets and headsets will inevitably be budget items which may last weeks or years. This is most problematic at the hubs, where a corroded cup-and-cone can ruin the wheels. Conical rubber external seals can be surprisingly effective at keeping this in hand. Also, machine-made wheels on bikes at this price can be erratically tensioned and could lead in time to spokes snapping. Ask your mechanic to give the wheels a thorough tune-up before the bike leaves the shop.

Somewhere between a street cruiser and a Dutch shopper in style, the Raleigh Wayfarer mixes classic looks with compact geometry in a bike that keeps it clean and simple. The aluminium frame is the main nod to modernity. It is equipped with rack bolts, though the steel fork is not. The white Schwalbe Road Cruiser tyres add to the gangster look but have reflective walls for side visibility and they are slim enough for modest paced commuting. A SRAM 3-speed hub gear and the slender mudguards front and rear plus chainguard keep the amount of muck and maintenance down. A cool commuter. 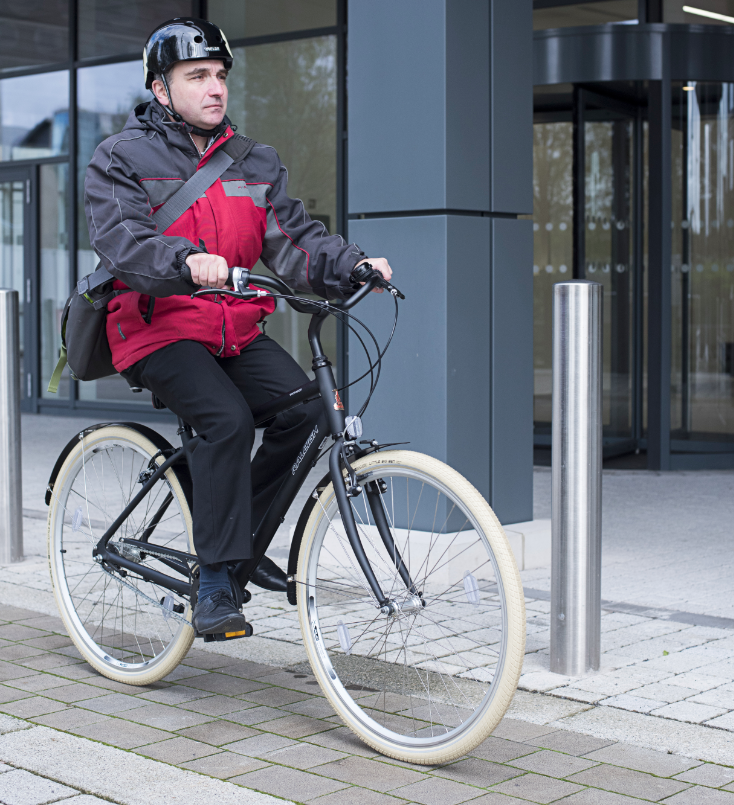 The 400 comes in at a penny under what its name suggests, and for that you get a curvy aluminium alloy frame. The fork is hi-tensile steel, but even so, that beats a sub-standard suspension fork for commuting. Both frame and fork have fixing points and ample space for mudguards and racks. Gearing is typical hybrid: triple-ringed 21-speed Shimano, with a 28/38/48 chainset and 14-28 cassette. Basic but strong rims, wearing anonymous 38mm-wide road tyres, are laced to disc brake-compatible hubs, and it’s the brakes that are the highlight of the package: Avid’s excellent BB5 mechanical disc callipers. It’s a tidy-looking machine. 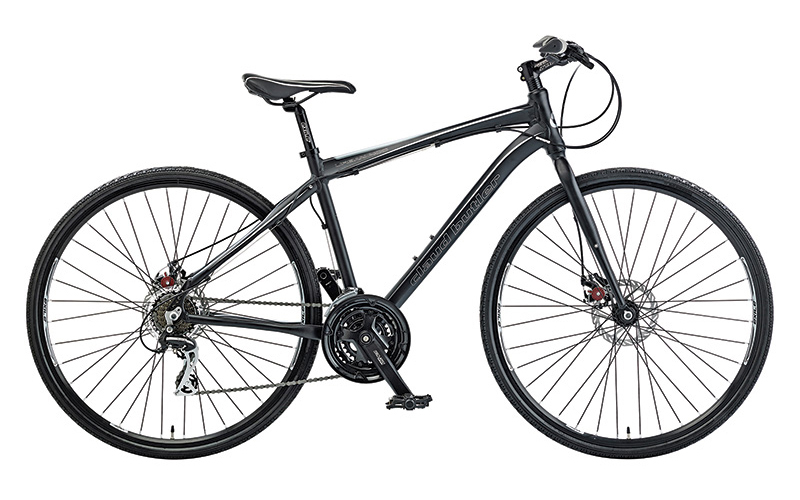 Part of Giant’s women-specific Liv range, the Alight 3 City is aimed at delivering a comfortable and enjoyable ride around town. At £50 less than the Claud Butler, the main differences are in the Tektro V-brakes and the more upright riding position. It also has a monster 34-tooth sprocket, combined with a triple chainset, for really hilly rides. The step-through frame is great for anyone who wants to ride in a skirt, dress or sari. Giant’s own 32mm-wide tyres have puncture protection, and its own brand wheels, bar, stem and saddle, full-length mudguards and a kickstand complete the package. 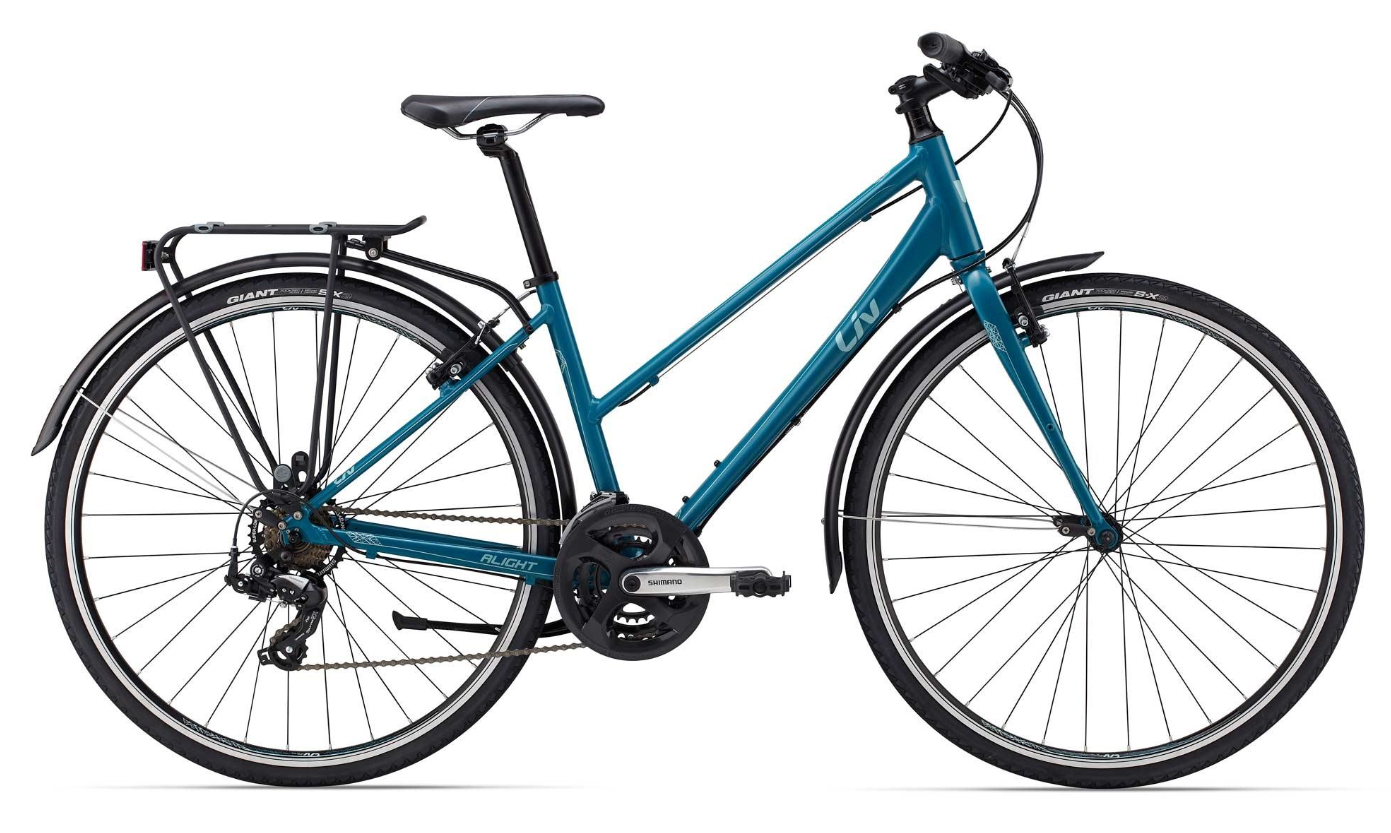 Hub gear Most road bikes come with a rear derailleur, which moves the chain from sprocket to sprocket, but with a hub gear, as on the Raleigh Wayfarer, all the mechanisms are contained inside the shell of the rear hub. The working parts are protected from the elements, and you can change gear while standing still.