Northern Ireland’s capital city is compact enough to get around easily by bike but there’s work to do to make it more cycle friendly.

Belfast is Northern Ireland’s biggest city and home to its legislature, the Northern Ireland Assembly at Stormont. Situated on the coast where the River Laggan meets Belfast Lough, a deep and sheltered sea inlet, it’s been a major port since the early 19th century. The Harland and Wolff shipyard, which built the Titanic, was once the biggest in the world. No ships have been built there for two decades but the giant cranes named Samson and Goliath still dominate the skyline.

Belfast was an industrial city even before shipbuilding, its growth fuelled by world-leading linen production. There’s still a Linen Quarter in the city, although there’s no smoke now from the textile mill chimneys. Belfast suffered postwar industrial decline like other UK cities. The effect on the economy was exacerbated by another issue: the Troubles.

Belfast in particular was blighted by Northern Ireland’s sectarian violence. The ‘peace walls’, built to separate neighbourhoods, remain – as do the bullet holes in some of the buildings. It’s hard to overstate how important the Good Friday Agreement of 1998 was. Belfast’s peace dividend is evident in its economic rise (unemployment is now lower than the UK average) and in its extensive urban regeneration. Cycling facilities are starting to appear too, though Northern Ireland as a whole has a long way to go: only 1% of journeys here are made by bike.

The best type of bike for cycling in Belfast

Although bordered by big hills, Belfast itself is low lying. It’s not pan flat but neither is it particularly lumpy. Wide-range gears are only really necessary if you’re heading out of the city. For commuting, a 7- or 8-speed hub gear or a 1x derailleur setup should be fine.

Ireland is known as the Emerald Isle because of its greenery, a result of its abundant rain. Belfast gets some (at least 1mm) on more than 150 days a year. Plenty of places in Scotland and northwest England receive more. Nevertheless, mudguards are a year-round essential for commuting. 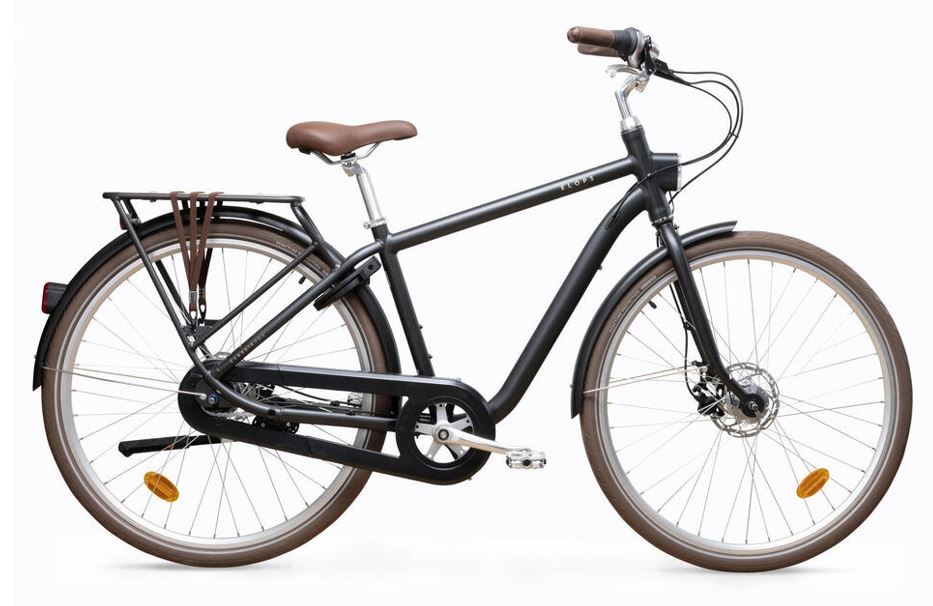 If you fancy something lighter and sportier, perhaps for country lanes exploration as well, the 11kg Whyte Carnaby (RRP £750) would be a good option. It has a 1x9 Shimano Altus drivetrain, hydraulic disc brakes, and fittings for full length mudguards and a rear rack. Its 37mm tyres will tackle better quality off-road tracks.

The Belfast Bicycle Network hasn’t yet come to fruition. Cycle routes do exist in the city. They’re a mix of shared paths with pedestrians, on-road cycle lanes, and traffic-free cycle tracks. Sustrans NCN routes 9, 93, and 99 will take you out of the city largely on traffic-free cycle tracks but aren’t so useful for getting around it. The Department for Infrastructure’s online map shows what facilities exist where, although it’s not practical for on-the-bike navigation. The Citymapper app doesn’t work for Belfast yet; the nearest big city is Dublin. Google Maps functions for cyclists, as does Cyclestreets, but both seem to put you on busy roads more often than they do in, say, England.

Translink is responsible for both rail and bus transport in Northern Ireland. That makes the online journey planner (or the app) a one-stop shop. You can search for rail-only journeys, bus-only journeys, or both. Often you’ll need to go at least part way by bus because the Northern Ireland rail network is sparse. Fortunately Translink has a fairly enlightened attitude towards cyclists. Up to four bikes are carried for free on NI Railways on a first come, first served basis, but only after 9.30am on weekdays. Bikes are also carried for free on Ulsterbus services (same restriction), as long as space is available. You can’t take bikes other than folders on the Metro and Glider bus services.

There’s cycle parking at both train stations and bus stations, including secure cycle shelters. To use the latter you’ll need a Bike Fob, which has a one-off fee of £10. Belfast also has a bike hire network, Belfast Bikes.

One of the most popular traffic-free routes in Northern Ireland is the Comber Greenway, a seven-mile former railway that runs between east Belfast and the rural commuter town of Comber. It’s ideal for families, as is the Connswater Community Greenway, a linear park in east Belfast with 10 miles of foot and cycle paths. For a longer day out there’s the Lagan and Lough Cycle Way, 21-mile traffic free ride connecting Lisburn, the Lagan Valley, Belfast, and Jordanstown. There are train stations en route if you need to cut it shorter or want to ride one way and train it back. For sightseeing in Belfast itself, there’s the 4-mile Maritime Heritage Trail. 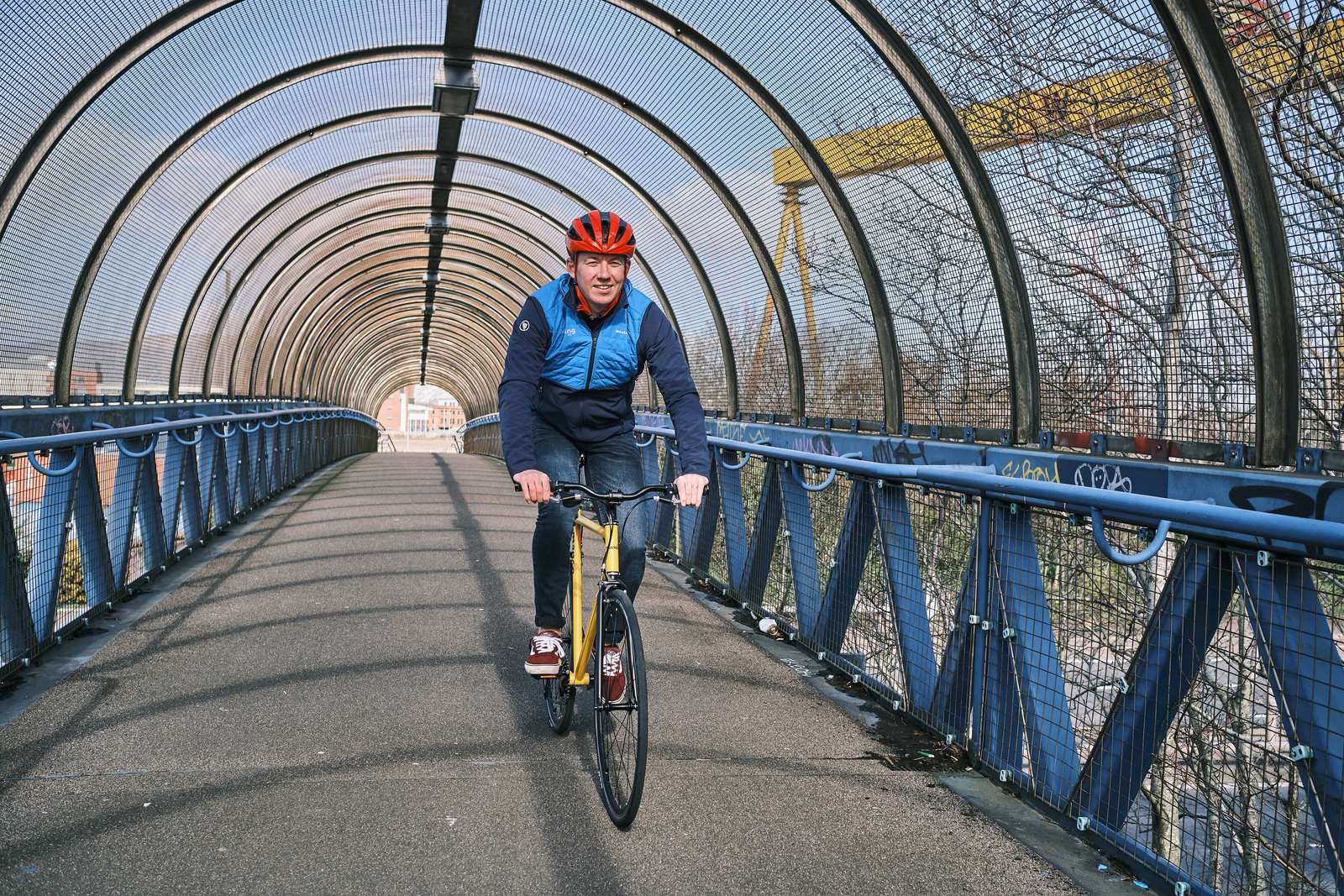 There are several mountain bike centres in easy reach of Belfast. The closest is Barnet Demesne on the city’s outskirts, which has short green and blue trails (with some red-grade options) and a jump park. Castle Ward on Strangford Lough is good for families, having three short green trails and a 13km blue trail. More experienced riders looking for red and black trails should head south to Castlewellan or Rostrevor.

The scenic countryside of Northern Ireland, which formed the backdrop of large parts of HBO’s Game of Thrones series, is easily accessible by road bike. You could follow NCN route 9 south, then peal off and explore the Mourne Mountains. Or head out to Larne and ride up the Antrim Coast to Carnlough and beyond. Or ride inland and along the shore of Lough Neagh, the UK’s largest lake. Join a local cycling club to get the most of road riding in the area.

Belfast has a good selection of bike shops, many of whom are Cyclescheme retailers. Here are just three that come highly rated.

Bicycle Coffee Shop stocks Trek, Enigma, and Kinesis bikes. They also do bike fitting, wheel building, and can help you assemble a high-end custom bike. And as the name says, they also do a good cup of coffee. Cyclescheme customer comment: “An excellent shop which went the extra mile to get the bike I wanted… A+ highly recommended.”

Chain Reaction Cycles is best known as an online retailer, but its headquarters are in Belfast and it has a retail store there too. It’s a 10,000sq ft store whose bike brands include Commencal, Cube, Lapierre, Ghost, Marin, and Vitus. And you can order anything from its online store for next-day pickup there. Cyclescheme customer comment: “Staff were excellent: knowledgeable and good banter too.”

McConvey Cycles stocks Brompton, Gazelle, Giant, Liv, Pinarello, and Specialized bikes. In business for three decades, the shop offers bike fitting, servicing, home delivery, and more. Cyclescheme customer comment: “Staff were very friendly and knowledgable, they even talked me out of buying a more expensive bike to one that suited my needs more.”

Keeping your bike secure in Belfast

Bike theft isn’t terrible in Belfast. By police force area, Northern Ireland has one of the lowest levels of reported theft in the UK. Yet there is under-reporting of theft, and Belfast does account for a good chunk of the country’s stolen bikes.

Always lock your bike whenever you walk away from it, ideally with a Sold Secure Gold rated lock. Lock the bike through the frame to a sturdy piece of street furniture or a dedicated cycle stand. If you have a high value bike or will be leaving it locked up for an extended period – for example, overnight – use two locks.

Wales’s biggest city is flat and compact, making it well suited for bikes if cycling...