Devon’s county town is compact city whose queues of stationary commuter traffic should make cycling the obvious option – if you can handle some hills.

Sitting halfway down the leg of England’s South West Peninsula, Exeter has a mild climate even by UK standards and is surrounded by beautiful Devon countryside. It’s always been well connected by road – the Fosse Way ended here in Roman times and now the M5 does the same – and by rail it’s less than three hours from London. Yet it can feel relatively remote, and its distance from key resources meant it didn’t experience the industrial growth of other British cities during the steam age.

As such, many of the city’s sandstone Georgian buildings survived into the 20th century… until they were comprehensively bombed by the Luftwaffe in WWII during the Baedeker Blitz. So Exeter is now a mixture of interesting architecture and post-war concrete. On the one hand most of the original Roman city wall still stands, and narrow, cobbled Gandy Street survived to inspire Diagon Alley in the Harry Potter series by Exeter University alumnus JK Rowling. On the other hand, the New Economics Foundation think-tank has branded the city’s High Street the worst example of a ‘clone town’ in the UK.

Like much of the South West, Exeter is a popular place to relocate to. This doubtless accounts for its congestion problems: for a small city it has disproportionately bad traffic, with around 35,000 additional people commuting into the city on roads with limited capacity. The flipside of this is that it makes even more sense to travel by bike. You can pedal anywhere in Exeter within 30 minutes. And as one of the six original Cycling Demonstration Towns in England, cycling facilities are relatively good.

The best type of bike for cycling in Exeter

Exeter is north east of Dartmoor so it enjoys a rain shadow effect from prevailing south westerlies, making it drier in the summer than nearby Plymouth but also more frost prone in winter. You’ll still want mudguards for commuting, of course: this is the UK and rain can and does fall in any month.

You’ll also want either low gears or electric assistance because Exeter is quite hilly. It originally sat just on a ridge, although it’s since expanded onto the floodplain of the River Exe. Millions has been spent on flood defences after some serious inundations there.

In terms of e-bikes, the Cube Touring Hybrid One 400 (RRP £2,399) is one of the least expensive to come with a more powerful mid-motor, which will help you get up steep hills easier. It’s equipped for commuting and leisure riding, having mudguards, rear rack, kickstand and lights. Its 55mm wide Schwalbe Big Ben tyres will be great on towpaths and cobbled streets as well as tarmac roads.

If you don’t need the boost from a battery, a hybrid with a decent gear range is all you need. There’s lots to choose from. The Ribble Hybrid AL Commuter SRAM 2.0 is a good one at £899 (RRP). While it has ‘only’ 1x11 gearing, the mountain bike size chainring (32t) and big cassette (11-42t) mean that bottom gear is lower than many hybrids – including Ribble’s 2x9 Shimano-geared version of the same bike. The Hybrid AL Commuter comes with mudguards and a rear rack, and the tyres are wide enough for good quality tracks.

You can get an overview of the results of Exeter’s Cycling Towns investment on the Devon Council website, whose map shows cycle routes, on-road cycle lanes, points of interest, cycling parking, and bike hire locations – both conventional bikes and electric-assist ones. You can view the same information offline by downloading a PDF cycling map of Exeter or by picking up a printed copy from Exeter Tourist Information Centre. For on-the-bike navigation, Citymapper works for Exeter if you select ‘Bristol and Cardiff’ as your home city.

Exeter’s rail connections are good. There are two lines towards London – the route to Paddington is quicker than the one to Waterloo – and a couple of local lines, the Dartmoor Line and the Avocet Line. The local services are run by GWR and carry two bikes; if you don’t have a reservation it’s first come, first served. These trains will take you out to Okehampton on the northen edge of Dartmoor or along the estuary as far as Exmouth.

Intercity routes are run by GWR and CrossCountry. GWR intercity trains carry either two (five-car trains) or four bikes (longer trains), and reservations are ccompulsory. CrossCountry trains normally have two reservable spaces and one extra space for an unreserved bike. Folding bikes travel as luggage on either, as they do on local trains.

Ferries across the River Exe carry conventional bikes as well as folders. The council-run service from Topsham carries up to six normal bikes or four e-bikes for only 80p each. The Starcross Ferry to Exmouth carries bikes subject to space available for £2 each, including e-bikes and tandems. You have to be able to carry your bike up and down steps to board this ferry, however.

Despite Devon’s hills and Exeter’s choked roads, there are traffic-free family rides nearby. The most accessible is the Exe Estuary Trail, which runs along both sides of the estuary, offering great riverside and sea views – particularly for birdwatchers as the area is a haven for wildlife. The whole route ridden as a loop, with a trip on the Starcross Ferry, is about 26 miles. You can ride down just one bank to Dawlish or Exmouth and then take the train back from either. 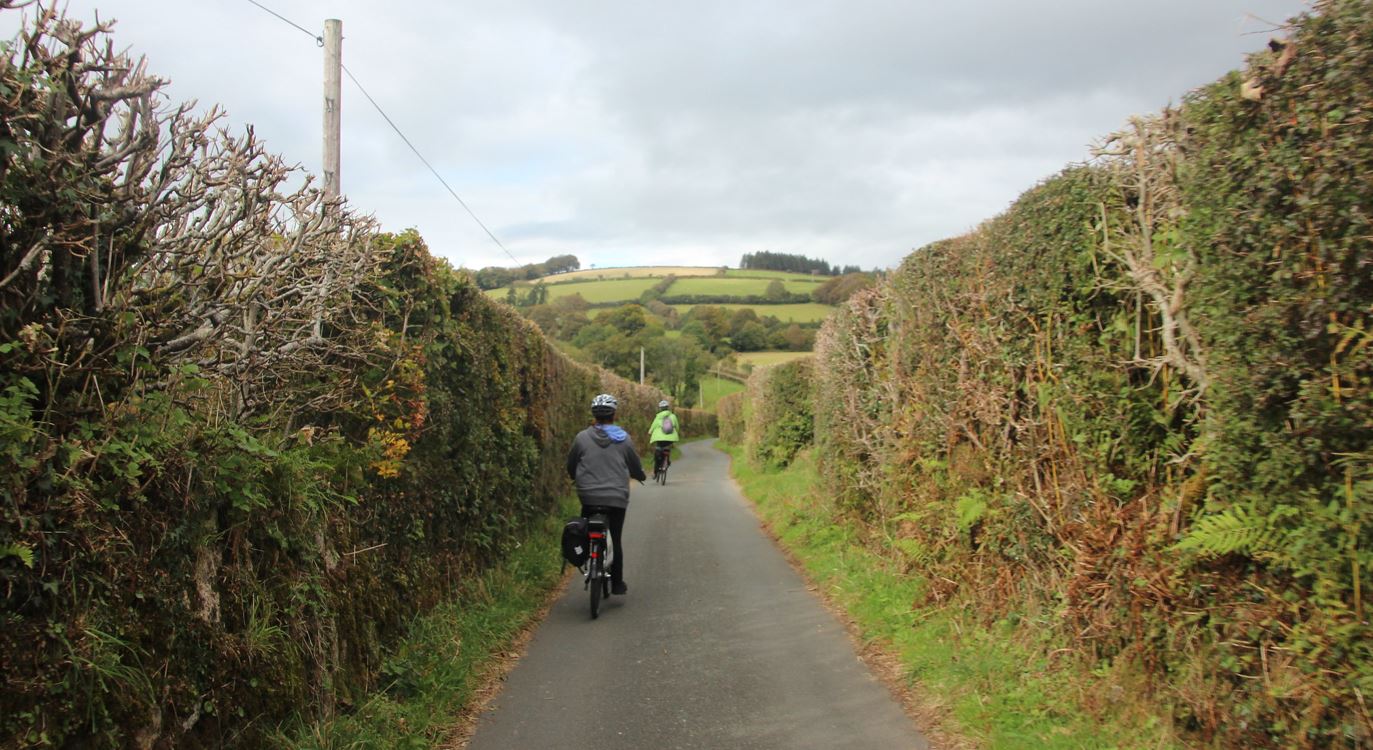 Other good family rides are the Grand Western Canal towpath and the Stover Trail. The Grand Western Canal is an 11-mile waterside ride from Tiverton (14 miles north of Exeter) to the Somerset Border at Lowdwells Lock. Unless you use local lanes, you’ll need to take the same return route. The Stover Trail is a six-mile route, mostly traffic-free, linking Newton Abbot (18 miles from Exeter) with Bovey Tracey.

Devon is a big county with more miles of road than Belgium, many of them quiet country lanes. So the opportunities for road cycling are vast. If you want a signed route, there’s the 95-mile Dartmoor Way around the edges of the high moor. To discover other parts of Devon, your best bet is to ride with the experts: join a local cycling club. There are plenty to choose from.

In addition to these purpose-built trails, there’s Dartmoor itself for the more adventurous. You’ll want a guidebook such as Vertebrate’s South West Mountain Biking and you’ll need to be self-sufficient and sensible.

Exeter has a decent selection of bike shops. Here are three of the highest rated by Cyclescheme customers.

Bike Shed, which has a branch in the city centre and another on the outskirts, stocks a diverse range of bike brands, including Bianchi, Brompton, Cannondale, Claud Butler, Cube, Dawes, Forme, Giant, Kinesis, Liv, Pashley, Probike, Santa Cruz, Tern, Trek, Whyte, and Wisper. Bike fitting is available, as is click-and-collect and home delivery. Cyclescheme customer comment: “I have nothing but good things to say about Bike Shed. They are always helpful, knowledgeable and offer great advice.”

Saddles and Paddles, based on Exeter Quay, sells and hires bikes – as well as the canoes, kayaks, and paddle boards you’d expect from the name. Stocked bike brands include Genesis, Ridgeback, and Raleigh Electric. If you hire any bike, trailer, tag-along, or childseat you get your hire fee back if you subsequently buy one. Cyclescheme customer comment: “They really customised their offer to what we both needed.”

Route 2 bikes is just off Sustrans NCN Route 2 in the well-heeled Exeter commuter town of Topsham. Bikes are available for hire and for sale, with brands including Forme, Dawes, and Claud Butler, Batribike, and Emu. Cyclescheme customer comment: “Great advice and great products I would not otherwise have found. A really excellent independent cycle shop!”

Keeping your bike safe in Exeter

By post code area, Exeter has one of the lowest levels of bike theft in England and Wales. That’s partly because the EX post code includes lots of rural areas. There are parts in the city centre where theft is above the national average. If your bike will spend time parked there, it’s as likely to get pinched as in many cities. But generally speaking Exeter cyclists have it good.

Nevertheless, always lock your bike whenever you walk away from it, ideally with a Sold Secure Gold rated lock. Lock the bike through the frame to a sturdy piece of street furniture or a dedicated cycle stand. If you have a high value bike or will be leaving it locked up for an extended period – for example, overnight – use two locks.