London is enjoying a cycling renaissance, with cyclist numbers up and facilities spreading.

London is Britain’s biggest and most densely populated city by far: nine million people live in Greater London. The capital’s past stretches back two millennia to the time of the Romans. Some of that history is under ground – some of it Underground! Elsewhere the history is visible in the architecture as you thread its busy streets by bike, or burst out into the open on one of the bridges over the Thames.

London landmarks are known worldwide. Westminster and Big Ben. Tower Bridge. The London Eye. St Paul’s. Buckingham Palace. Trafalgar Square. They bustle with tourists, who visit London in greater numbers than any other UK city. Yet the engine of the capital’s economy, and much of the UK’s, is situated in the glass and steel skyscrapers in the City of London and Canary Wharf.

Perhaps surprisingly, London is one of the greenest cities in Europe. As well as public gardens and woodland, there are the big Royal Parks – notably Hyde Park, Kensington Gardens, and Regents Park. Cycling through them can be a welcome reprieve from roads with nose-to-tail traffic. 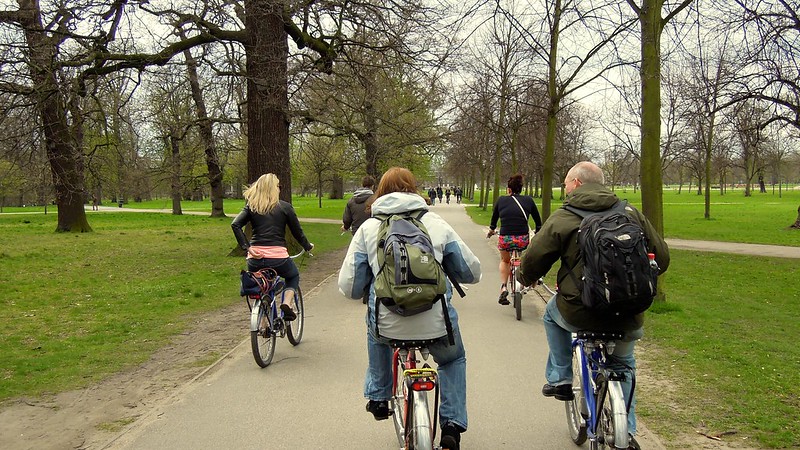 Traffic speeds are slow in London, partly due to congestion and partly the welcome implementation of 20mph zones. Because of this, cycling is much safer than it looks. The density of roads means that there are usually quieter routes available even when the growing network of cycling infrastructure peters out. Just stay clear of HGVs: left-turning lorries are disproportionately and fatally dangerous. Road positioning is critical on busy roads like London’s. Brush up your skills by reading Cyclecraft or getting some cycle training.

The best type of bike for cycling in London

Any bike will get you around the relatively flat streets of London but the best option is a compact folding bike. There are two reasons for this.

London has the highest levels of bike theft in the UK. With a compact folder, you don’t have to worry about thieves. You don’t even need a lock, because you can just carry the folder indoors, whether that’s your home, the office, the shops, a restaurant, etc. A lightweight cover can help soothe any objections.

Of the various folding bikes available, the British-made Brompton is your best bet – specifically, for London, the S2L (from £1,130 RRP). All Bromptons are super compact, making them easy to stash on public transport, under desks, or in cloakrooms. The S2L is a two-speed. The gear range is sufficient for London’s flat topography and it’s a lighter bike than the 3- and 6-speed models, so it’s easier to carry. The letter S signifies a flat handlebar and sportier riding position, which will make your commute a little quicker. (If you want to sit up more, get the M2L.) The letter L tells you it comes with mudguards fitted. Even though London is a hot and dry city by UK standards, there’s some rainfall almost one day in three.

In the last two decades, cycling levels in London have soared. Between 2000 and 2012, they doubled. Now around 7% of London’s population cycles each day. That’s low by Dutch standards, but high for the UK. Much of this growth is down to the city’s growing cycleway network. The congestion charge has likely helped too by disincentivising driving.

Since 2010 London has had a popular hire bike network, currently sponsored by Santander. Tens of thousands of journeys each day are made on these bikes, which can be picked up from around 800 docking stations in the city. City Bike Hire enables you to save 32-42% on Santander Cycles yearly membership. 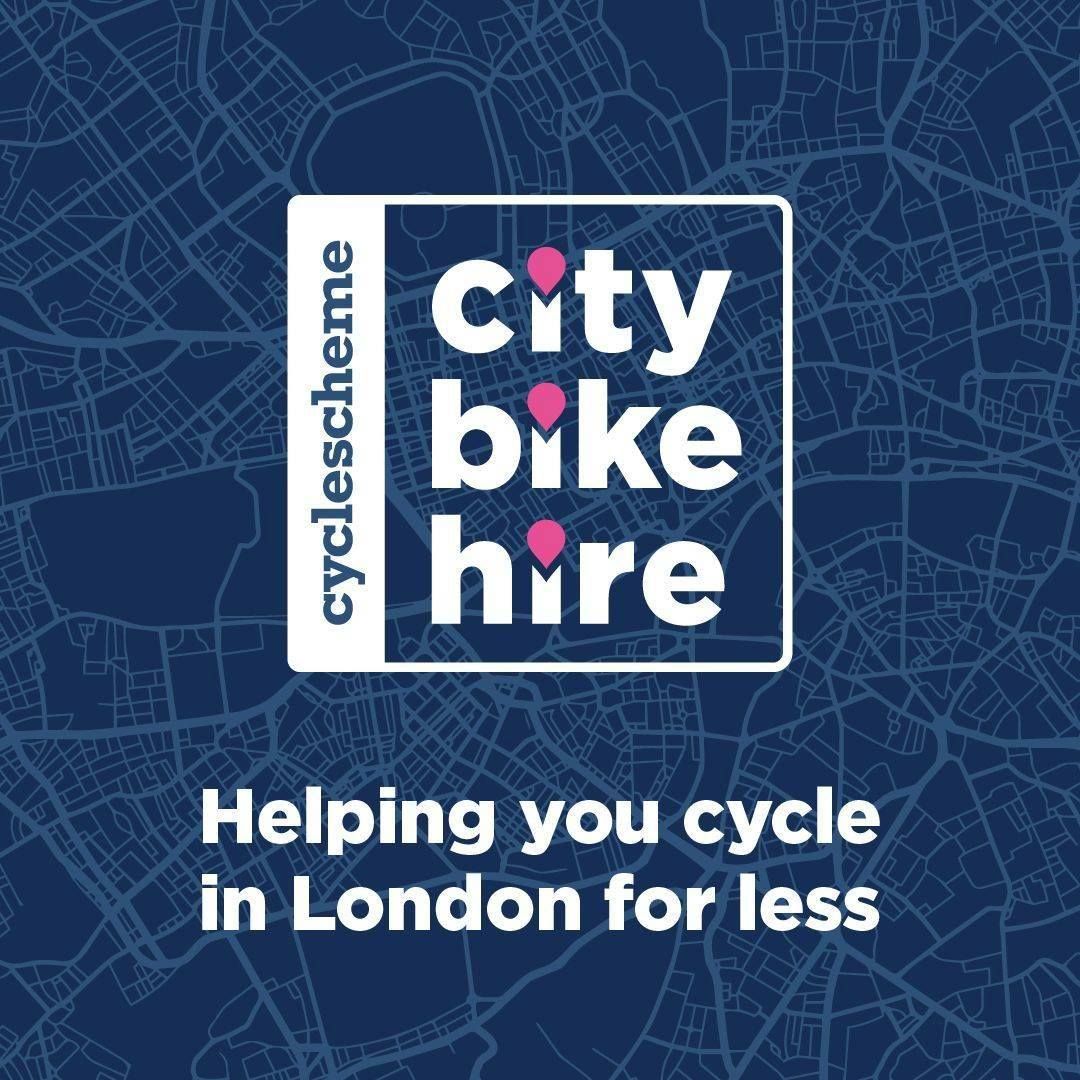 London’s public transport network is extensive and heavily used. It includes more than 400km of lines on the London Underground, a comprehensive bus network that runs 24 hours a day, trams, ferries on the Thames, and even a cross-river cable car service. You can take non-folding bikes on some of the Underground network at certain times, as well as on the Emirates Airline cable cars, most surface rail services, and some river services. You can’t take non-folding bikes on buses or trams (folders are fine).

Cycling is an excellent way to explore London, as well as to get from A to B. Using the cycleway network you can largely avoid the traffic.

For some sightseeing, how about a 5km spin from the Tower of London to Big Ben? You’re on a cycleway throughout, taking in some of London’s most iconic sights along the river. As well as the Tower of London, Big Ben, and the Palaces of Westminster, you’ll spot Tower Bridge and, over on the south bank, the Shard, Shakespeare’s Globe Theatre, and the London Eye.

Or how about riding from King’s Cross Station to Notting Hill along the Regent’s Canal towpath? It’s a flat 10km route that takes in sights like the Trellick Tower, Camden Lock, Regent’s Park and Little Venice. It culminates in Notting Hill, which is a great place to explore thanks to its world-famous restaurants, vibrant colours, and the Portobello Market. 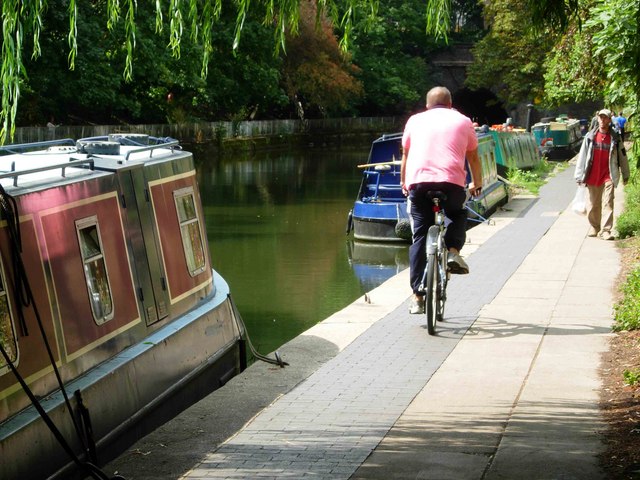 There are some fine longer-distance road rides out of London. One of the better known is from Westminster Bridge to Box Hill via Hampton Court Palace. The 2012 Olympic road race went this way. Box Hill itself is very manageable climb, rising 129 metres at an average gradient of 5%. At the top there are expansive views – and a café. Windsor and back to London is another good road ride, as is the journey in the opposite direction from Greenwich to Gravesend.

Mountain bikers have slimmer pickings in London. Epping Forest packs a lot of trails into a fairly small space. Just outside London there are lots of trails in the Surrey Hills . Because they’re so close to London, they can be busy on summer weekends.

Keeping your bike secure in London

London is ground zero for bike theft in the UK. In the most recent top ten of cycle theft hotspots, London boroughs took half of the placings, including the first. That was City of London. Others were Hackney, Hammersmith and Fulham, Camden, and Westminster.

The vast majority of bike thefts take place not on the street but in ‘semi-private’ locations at home. That means on your property but not in the house – for example, a garage, shed or garden. Lock your bike to a wall or ground anchor if it will be in one of those locations. Better yet, park it inside your home – which is easy if you have a folding bike.