The northern city has some catching up to do with transport cycling but its plans don’t lack for ambition.

‘Why Manchester is a terrible cycling city’: that was the headline of a 2015 article in The Guardian – The Manchester Guardian, to give it its original name. The paper’s North of England Editor, Helen Pidd, cited traffic-choked streets, potholed roads, confusing one-way systems, and inadequate cycling facilities. In 2017, however, Mayor Andy Burnham appointed Chris Boardman as the city’s Cycling and Walking Commissioner.

Boardman is British Cycling’s policy advisor and a voice worth listening to on transport cycling. The council is aiming for a 300% increase in cycling across the city region by 2025, and for 50% of journeys in Greater Manchester to be on foot, by bike, or on public transport. It’s proposing to spend £1.5bn over ten years to bring Manchester’s cycling and walking facilities in line with London’s.

The best type of bike for cycling in Manchester

Manchester is known as a rainy city. Wrongly, it turns out. Manchester has fewer days with rain than the UK annual average (140 versus 154) and slightly less rainfall each year than Amsterdam. Nevertheless, you’ll still want mudguards.

The Pennines loom large to the east but Manchester itself isn’t particularly hilly, unlike northern neighbours such as Bradford, Leeds, and Sheffield. Low gears will primarily be needed for recreational rides if you’re crossing into Lancashire, West Yorkshire or Derbyshire. For city cycling, even a singlespeed should be sufficient. 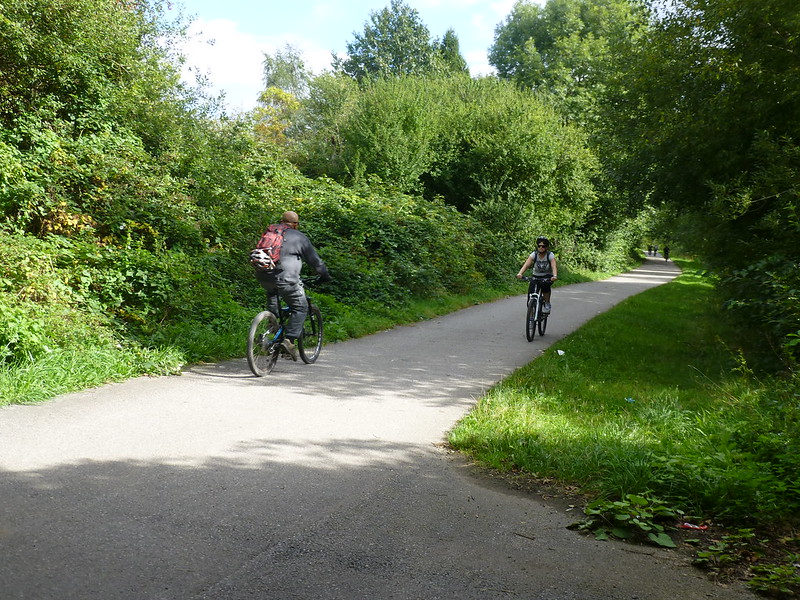 Wider tyres will cope better with Manchester’s less-well-maintained roads and its on-street tram tracks (see below). A folding bike with 20in or smaller wheels, meanwhile, can be taken onboard the many trams, buses and trains that serve the city. The Tern Link D7i, RRP £900, ticks both boxes: it’s a 20in-wheel folder with 50mm-wide tyres. The cheaper Tern Link C8 (RRP £700) is similar.

If you’d prefer a singlespeed rather than a folder, get one with wider tyres such as the Ribble Urban 725s; you’ll need P-clips to attach mudguards. Whatever bike you choose, a copy of Cyclecraft will help you cope with Manchester’s traffic.

Since it was at the centre of the Industrial Revolution, Manchester has good canal and rail connections. These links remain useful for cyclists for traffic-free towpath cycling and mixed-mode travel respectively.

There’s cycle parking at or near Manchester’s main stations: Piccadilly, Victoria, and Oxford Road. Piccadilly has a Brompton Bike Dock, the first one in the country to be installed. If you’re regularly combining cycling with train travel, it makes sense to have a folding bike of your own. Folders are also the only bikes accepted on Manchester’s buses and Metrolink tram network; you’ll need a cover or bag.

When you’re cycling around the city, take great care around the on-street tramlines. They cause cycling crashes, particularly when the rails are wet or icy. Wider, softer tyres are less likely to slip due to the larger ‘footprint’, and less likely to wedge in a gap. Regardless: try to cross tramlines at a right-angle, even if this requires a deliberate dog-leg. Don’t ride along tram-only routes.

Manchester’s cycle route network is patchy. The council is aiming to build a proper one with the Bee Network, using a combination of Beeways (signed routes on quiet streets) and Busy Beeways (segregated cycling and walking facilities alongside busy roads). By the end of 2021, 55 miles of segregated cycling and walking provision are due to be completed. So change is coming. In the meantime, use a route-planning app such as CycleStreets Journey Planner or CityCyclist to plot quieter routes.

A number of National Cycle Network routes run through Manchester. The Trans Pennine Trail will take you west to Liverpool and Southport or, if you fancy a cycling holiday, east as far as Hornsea near Hull.

There are also shorter Sustrans routes in the Greater Manchester area that will keep you wholly or mostly away from traffic. The Fallowfield Loop is a good choice for family cycling: just five and half miles long, it follows a former railway line from Chorlton-cum-Hardy to Fairfield, passing near several parks.

Fancy a cycling-oriented day out in the city? The National Cycling Centre is only a couple of miles along the Ashton Canal towpath from Manchester Piccadilly. As well as taster sessions on the wooden boards of the indoor velodrome, you can book sessions on the indoor BMX track or practise your off-road skills on the Clayton Vale Mountain Bike Trails.

For keen road cyclists, the Peak District is in easy reach if you like hills – make sure you’ve got low gears for the likes of Winnats Pass – while the Cheshire plain is packed with quiet lanes if you prefer to avoid them. There are endless opportunities for mountain biking in the Peak District too, though you’ll want a guidebook.

Keeping your bike secure in Manchester

Bike theft isn’t as bad in Manchester as in hotspots like Cambridge, Oxford, and parts of London. Nevertheless, thefts in the city centre have been twice as high as the national average in recent years . Away from the centre, thefts tend to be much lower.

Nationally, the vast majority of bike thefts take place not on the street but in ‘semi-private’ locations at home. That means on your property but not in the house – for example, a garage, shed or garden. Lock your bike to a wall or ground anchor if it will be in one of those locations. Alternatively, park it indoors – no problem if it’s a folding bike.