How to negotiate roundabouts

Impatient drivers, erratic signalling, and poor road layout can make roundabouts anything but magic. Here's how to take control

Roundabouts are designed to keep traffic moving. In theory, they're straightforward: you approach in the lane that goes where you want to go; you give way to traffic approaching from the right; you signal correctly; you leave the roundabout. In the real world, roundabouts are complicated by careless driving and impetuousness. At best you'll get an apology: 'Sorry, mate, I didn't see you…'

Rule #1 for negotiating roundabouts safely is this: stay well clear of the edge of the roundabout, particularly the Give Way markings, so that drivers see you and react to you. Take your lane: ride in the centre of the relevant lane. You'll then be where drivers are looking for traffic, not at the edge of the roundabout where they're not looking. And if a driver does initially fail to spot you, both you and they have more time to react.

Roundabouts are easier if you ride assertively, owning your space and avoiding hesitation. But never assume that any other road user will do the right thing. Eyeball approaching drivers. If they don't look at you, they've haven't seen you. Be ready. You might need to yield, even if it's your right of way. Roundabouts are more intimidating if you can't match the speed of other traffic on them, or if the traffic volume or junction complexity is overwhelming. If you're not comfortable on a particular roundabout, don't use it. Design your route to avoid it, even if this means adding distance. Or get off your bike and bypass it as pedestrian.

Whichever direction you're going, take your lane as you approach. Check over your shoulder, and when you're still 20-30 metres away, gradually move into the centre of the lane – signalling to drivers behind if necessary. Drivers can't now pull alongside, and it dissuades them from racing you to the roundabout and cutting you up. If possible, adjust your speed so that you arrive when there's a gap in the traffic. That way you won't have to get back up to speed from a dead stop. If that's not possible, shift into a gear you can accelerate away in before you stop. 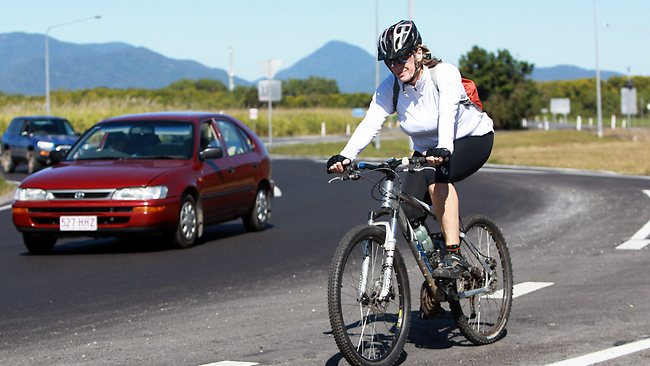 Signal boldly. If you're turning left, indicate left on the approach, then again before you turn. If you're going straight on, indicate left as you pass the previous exit on the roundabout. If you're turning right, indicate right on the approach and as you go onto the roundabout, then left as you pass the exit before yours, peeling off gradually and taking care that no one is trying to pass on your left. Eyeball drivers! Drivers signal continuously when going left or right because they have indicators (although many then forget to indicate left when exiting the roundabout). On a bike, riding one-handed compromises control and speed. It's often better to indicate as you enter the roundabout and then again as you approach each exit, rather than sticking your arm out continuously. With correct road positioning, drivers will be in no doubt about where you're going.

Single lane roundabouts are easiest, as there's no room to pass when you take the lane. On mini-roundabouts, drivers can drive over the central circle; impatient ones might do so when you're already on the roundabout. So signal clearly as you approach and join the roundabout. Mini-roundabouts sometimes see a 'standoff ' when drivers arrive at the same time, unsure as to who has priority. If possible, adjust your speed on the approach so you don't have to come to a halt, as this enables you to take the initiative. On multilane roundabouts, take the leftmost lane that goes where you want to go. Play close attention to road markings! Normally you'll be in the lefthand lane when going straight on, and the righthand lane – or a central lane – when going right. Don't change lanes without looking back. 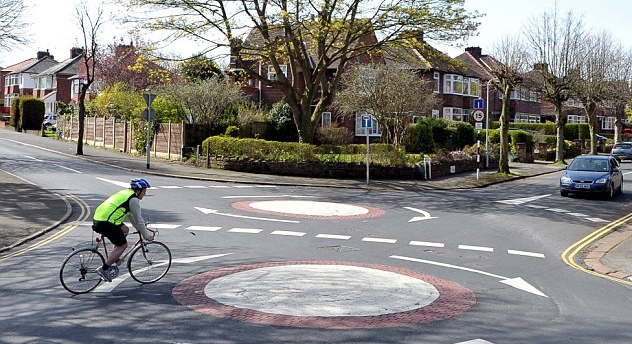 Take special care joining and navigating roundabouts if there has been rain after a recent dry spell, which brings spilled oil to the surface, or if it's icy. Braking while turning is a bad idea on a two-wheeler, unless you're sure of having traction. When in doubt, reduce speed when you're still going in a straight line, before you reach the roundabout.