Last week BikeBiz reported that Cyclescheme had made the shortlist of the one hundred fastest growing UK companies.

But, with a growth rate of nearly 350 per cent a year, it can now be revealed that Cyclescheme tops the annual compilation of 'must-watch' companies, a huge accolade for the business which provides a Cycle to Work scheme service to UK independent bike shops.

Cyclescheme was set-up by the ex-owners of Avon Valley Cyclery of Bath: Richard Grigsby and Gary Cooper. In 2005 they created their business after witnessing the lacklustre performance of the first Cycle to Work third-party facilitator, Booost.

In the first year of trading, turnover was £253,000. It's now nearly £25m a year. In one day in June, Cyclescheme sent out 800+ bike vouchers, more than the number of vouchers it sent out in the whole of its first year.

The business now has 25 staff in a three-storey building in Bath. 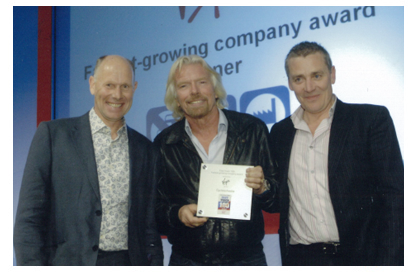 Cyclescheme has sent customers to bike shops from the likes of Rolls-Royce, BBC, Coca-Cola and more than a third of Britain's police forces and councils.

All of the Fast Track 100 companies get to send executives to a party early next year at the home of Virgin's Sir Richard Branson.

Virgin has sponsored the league table for 13 years. The list is published as a supplement in the Sunday Times.

Branson said: "The last year has been one of the toughest I remember in business; but the fear of the early part of 2009 has been replaced by optimism we will find a way through. This sense of optimism is reflected in the sterling performance of the Fast Track 100 companies who are expecting impressive continued growth this year."