How to ride in winter

February and early March sometimes see the worst of the winter weather, but you can usually keep cycling so long as you bear in mind that…

It’s slipperier than you think

The biggest problem is the slippery patch you don’t expect and can’t see: black ice. You can be riding along normally – cheered, perhaps, by a spell of winter sunshine – then a split second later find yourself lying on the road.

Cycle cautiously whenever it’s cold enough to see your breath, especially early in the mornings or if the tarmac ahead is shadowed from the sun. Slow down so you won’t have to brake suddenly. Keep the bike upright rather than leaning it over in corners. Aim to ride in straight lines or gentle curves. Be alert for road surface irregularities that could sweep your front wheel sideways, such as tramlines, drain covers, or small lips where roads and off-carriageway cycle tracks meet. Cross these as close to a right angle as you can and keep going straight until the hazard is behind you.

Even without black ice, roads are wetter and dirtier in winter. Keep your speed under control and take care when cornering.

Snow isn’t as bad as it looks

You can cycle through snow that cars will struggle with. It’s easier on a bike with wider, lower pressure tyres, such as a mountain bike or cyclocross-style bike, preferably one with flat pedals and plenty of space around the tyres; compacted snow clogs clip-in pedals and collects around wheels.

While snow isn’t always slippery, it’s best to ride with caution whenever you’re on the white stuff. You don’t know what the snow is lying over. It might hide compacted snow, ice, or a pothole. British drivers aren’t accustomed to driving on snow and may slide, so give them a wide berth. Backstreets and bike-only routes are safer on newly fallen snow.

When it’s actually snowing, it’s vital that you can see and are seen by others. Wear a peaked helmet or a peaked winter hat – most fit under a helmet – to keep the snow out of your eyes. Bright bike lights and hi-vis clothing will make you more visible to drivers in falling snow.

Sheet ice is hard enough to walk on. On a bicycle (less so a tricycle) it’s extraordinarily difficult. No cycle tyre will grip on ice unless it has metal studs. Few cyclists in the UK keep a pair of studded tyres for the handful of days a year they might be needed, and thus few shops stock them. Yet without studded tyres, there’s a good argument for leaving your bike at home until the ice thaws.

If you’re dead set on riding, well trafficked roads are your best bet. These are the roads that are gritted first – or at all. Be prepared to walk your bike to the nearest treated road before mounting. It’s not worth risking 100 metres on side street that has turned into a toboggan run.

Gritted roads can ruin your drivetrain

The resulting salty slush and spray can turn your bike’s chain orange and stiff overnight. Mudguards and a chainguard will limit the amount of brine falling onto  the chain in the first place. Nevertheless, it’s worth chucking a bucket of hot water over your bike when you get home. Then lubricate the chain.

Even without the salt from road grit, winter rain and slush will eventually rust your drivetrain. So wash and re-lube your bike often through the winter months. Once a week should be enough, unless you’ve ridden on gritted roads; in that case, don’t delay.

Your bike lock may freeze solid

Sub-zero temperates can freeze locks. You’ll still be able to get the key in but it won’t turn. If this happens when your bike is at work or locked up in town, you’re stuck. The simplest solution is to pour hot water over the lock. This should free it. Oil the lock at your earliest opportunity so that the now damp internals don’t freeze up again. 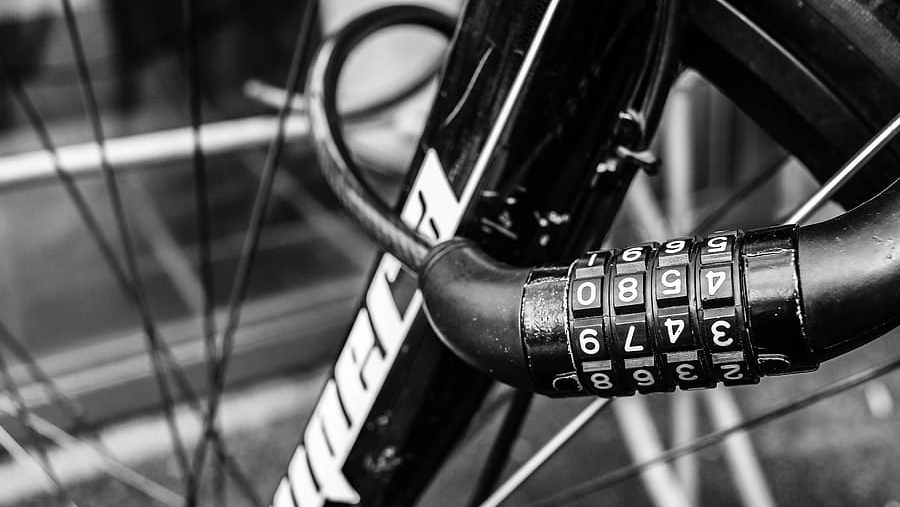 A freewheel’s internal pawls can also freeze up in the cold. You get on the bike and pedal and nothing happens: you’re pedalling air because there’s no drive. Again, hot water should do the trick. Pour it liberally over the rear hub from the drive side, then re-lube the freehub when you get the chance – or pay for your local bike shop to do it for you.

Being comfortable on a bike in the cold is very different from being comfortable on foot. On one hand, you generate a lot of heat from cycling so your torso doesn’t need as much insulation. On the other hand, the increased windchill means that your extremities – fingers, toes, and ears especially – get much colder.  And you can’t put your hands in your pockets or stamp your feet to warm them up when cycling.

The most important items in your winter cycling wardrobe are: