How to teach a child to ride a bike

Do you want to teach your child how to ride a bike, but aren't sure where to start? We'll explain the best bike, safety equipment and teaching methods.

Your child’s first bike needn’t be a big purchase, simply because beginner cyclists don’t need many of the features that experienced riders make use of. They won’t need a sophisticated gear system, and you can get some beautifully manufactured kids bikes from the likes of Isla Bikes and Frog Bikes.

Over the years, the way in which children learn to ride bikes hasn’t really changed, but recent times have seen certain teaching practices discredited. In this article, we’ll explore the thorny issue of learning to ride a bike, and consider what works and what doesn’t.

When to Teach Bike Riding to a Child

If you’re a keen rider, you might be eager to get your offspring into the saddle at the earliest opportunity – especially since the sooner they get started, the more time they’ll have to practice, and the better the cyclist they will (in theory) be.

While there is an element of truth to this, it’s worth exercising a little caution. Riding a bike requires balance and co-ordination, which children take time to develop.

So, at What Age Can a Child Ride a Bike?

There’s no one-size-fits-all answer to this question, but a good rule of thumb is that most children start learning to ride a bike between three and eight years old.

Bear in mind that if you start them too early they might quickly grow out of their first bike. That said, children as young as one can climb on board a toy tricycle and get to grips with steering and pedalling.

When they come to ride a real bike, they’ll need the physical skills necessary to balance in the saddle and work the pedals, as well as the mental skills to understand your instructions. Children learn best by play and experimentation, so investing in a toy tricycle very early on might well reap dividends when you finally buy them a real bicycle.

Getting Ready: Choosing a Child’s Bike and Safety Equipment

If they’re going to get the best out of their cycling career, they’ll need a bike that’s a pleasure to ride.

There’s a dilemma here – invest in an expensive bike and you run the risk that they’ll get bored and you’ll be out of pocket.

Invest in a cheap bike, and you’ll make that outcome even likelier.

If your child has a younger sibling to pass the bike along to, it might be worth investing a little extra in quality. Alternatively, you could consider purchasing a second-hand bike.

You can expect to spend between £200 - £450 for a quality child’s bike. Cheaper child’s bikes are not built to last – they’re not simply smaller versions of adult bicycles, but ones built to the prices that most adults are willing to pay.

Need a bike for yourself too?

Discover What You Can Save with Cyclescheme

What About a Balance Bike?

A balance bike is a child’s bike with no pedals. It’s an alternative to a child’s bike with stabilisers, but it serves a similar purpose: to introduce the techniques of bike riding gradually. This is similar to older bicycle styles such as the dandy horse, which was a bike without wheels.

Children who get around on balance bikes don’t have enough momentum to get very far before needing to push again with their feet, but they can easily get around, and develop a sense of balance without fear of falling over.

If you don’t want to buy a commercially-available balance bike, you can always convert an older bicycle by removing the pedals and lowering the seat so that your child’s legs can easily touch the ground.

Stabilisers are a classic means of getting a child riding early. Unfortunately, while they’re in place they actually inhibit the child’s ability to develop their sense of balance.

The fact is that balance is a far more difficult skill to acquire than pedalling, which takes just a few minutes to master. By exposing your child to the risk of falling early on in their cycling career, you’ll allow them to pick up an instinctive sense of balance in a way that’s fun, too.

To begin with, your child isn’t going to be riding at dangerous speeds, on roads, or in other hazardous areas (or so we hope, at least!)

That said, it’s still worth investing in protective headgear.

Young children will occasionally fall off their bicycles, and the risk of cranial impact is high enough to warrant protection. That said, there’s no law mandating that they wear a helmet, and the choice is entirely up to the parent.

If they’re going to be cycling on hard surfaces, you might go a stage further and invest in protection for the knees and elbows. This can protect against fractures when they instinctively put an arm out to stop themselves falling – which, as many cyclists know from experience, can lead to injury.

Finally, you’ll want to  equip your child’s bike with lights, and encourage them to wear reflective clothing; particularly for older children, if they’re going to be cycling on their own at dusk or after dark.

The safest approach, naturally, is for children to be kept out of the saddle at these times – but older children might value their independence, and the health benefits of cycling might well outweigh the risks posed by late evening rides in the eyes of some parents.

There’s a lot of disagreement when it comes to cycling safety equipment. Some riders contest that too much safety equipment might encourage the child to take risks that they wouldn’t if they were unprotected.

Ultimately, the most effective safety equipment is the child’s knowledge and confidence – and so safeguarding them is for the most part a matter of providing the right training.

Let’s look at what that cycling training might consist of.

Teaching a Child to Ride a Bike: Teaching Methods 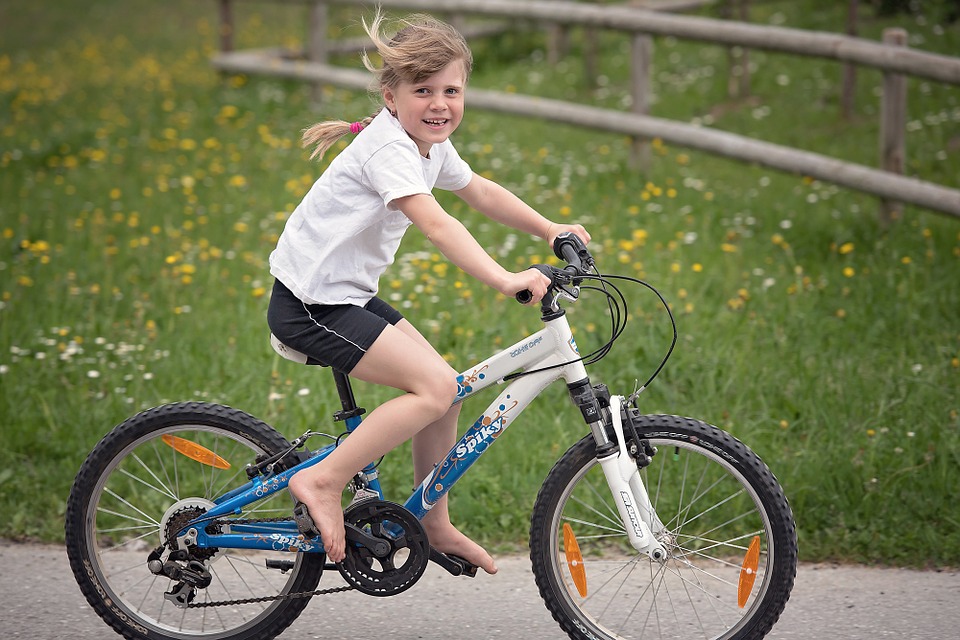 Let’s take a look at how to teach a child to ride a bike quickly and simply.

The best environment to learn is on a slight slope. This way they’ll have enough momentum that they won’t slow and overbalance, but not so much that they careen to an unsightly halt.

Grass is an ideal surface for learning to cycle – so long as it’s short enough that it doesn’t create significant drag, but long enough to provide cushioning when your child falls off.

Once you’ve pinpointed the best place to teach your child to ride a bike, take them around halfway up the slope and let them slowly coast down the hill. If they lose their nerve at any point, they can steady themselves by sticking their legs out. Over time, they’ll get used to the sensation of riding, and you’ll be able to start them from further and further up the hill.

How to Instruct a Child to Ride a Bike

Knowing how to ride a bike is one thing. Expressing that ‘how to’ in a manner that a child can understand is quite another.

If you’re overbalancing on a bicycle, you make a slight adjustment in the direction of the fall in order to get yourself straight again. Cyclists make these adjustments continually. Once you get the hang of it, they’re instinctive.

So, don’t tell your child to ‘balance’. Tell them exactly what they need to do in order to maintain their balance – i.e. steer in the direction they’re falling. Other actions, like pedalling and braking, can also be reduced to simple instructions like this.

Kids, of course, aren’t stupid. They won’t need to be guided through every physical motion. It’s usually enough to provide them with some basic pointers when they go wrong, and for the most part let them figure things out for themselves.

Teach them to value the small victories. When they take the stabilisers off, they might well be incredibly nervous – so lend them a little encouragement. When they finally manage to pedal on their own for a few metres, be sure to congratulate them.

Naturally, every child is different, and will respond to different training approaches. Just remember that riding a bike is meant to be fun – if they come to associate cycling with failure and disappointment, they probably won’t be all that eager to get back into the saddle, even if they’ve learned to ride.

If progress is slow and you can’t help but get exasperated, then it might be time to bring someone else in to provide tuition. There are lots of great schemes out there to get your children involved in. For example, Bikeability is a cycle training programme that helps children – or anyone learning to ride a bike – with the practical skills required.

Of course, while it’s great (and important!) to teach your child to ride a bike, you should be leading by example. Find out how our cycle to work scheme can help you spread the cost of acquiring the equipment you need to start commuting to work by bike.