How to true a wheel

Wheel buckled? With a spoke key and some patience, you can fix this without a trip to the bike shop.

A buckled wheel can ruin your ride. At best, the bike will handle oddly. At worst, the rim will rub against the brakes so it won't spin round. The good news is that a spoke key, the tool you need to fix this, will cost less than £10. A wheel jig, which costs about £100, is useful but not essential.

A bicycle wheel that is properly round and that doesn't wobble from side to side is said to be 'true'. If it's a circle, without high spots or low spots, it's concentrically true. If it the rim doesn't move to one side or the other when you spin it, it's laterally true. Here we're looking at how to correct a wheel that is not badly damaged but is laterally out of true, as that's the most common problem.

The typical spoke has a right-angle bend and a flattened head at one end where it fits through a hole in the hub flange, and a short threaded section at the rim end. A spoke nipple, a special kind of nut, fits through a hole in the rim and screws onto to spoke's threads. Tightening or loosening the spoke nipple will increase or decrease the tension in the spoke. This is how you true a wheel.

Spoke nipples have flats so that they can be turned by a spoke key. The spoke key must fit exactly. There's a number of different sizes, not to mention some unusual designs, so take your bike to the shop and ensure you get a spoke key that matches your bike's wheels. In an emergency, you can turn a spoke nipple with pliers, but you'll damage it so that it may be difficult to turn in future. The head of a spoke nipple is slotted for a screwdriver, but you won't be able to get at that unless you remove the tyre, innertube and rim strip, something you'll normally only do if you're replacing a broken spoke and its nipple.

Truing a wheel easiest if you remove it from the bike and put it in a wheel jig, as that has movable guides to make the repair easy. If you don't have a wheel jig, put the bike in a workstand or rest it upside down on the floor. If the bike has rim brakes, you can use the brake blocks as a guide. Need to move the blocks in or out to work better as guides? Use the barrel adjuster or reclamp the cable. If your bike has disc brakes, you'll need a couple of pencils and two elastic bands to fasten them to the fork or seat-stays, as shown. Matchsticks embedded in Blutak work too but they have tendency to fall off when knocked. 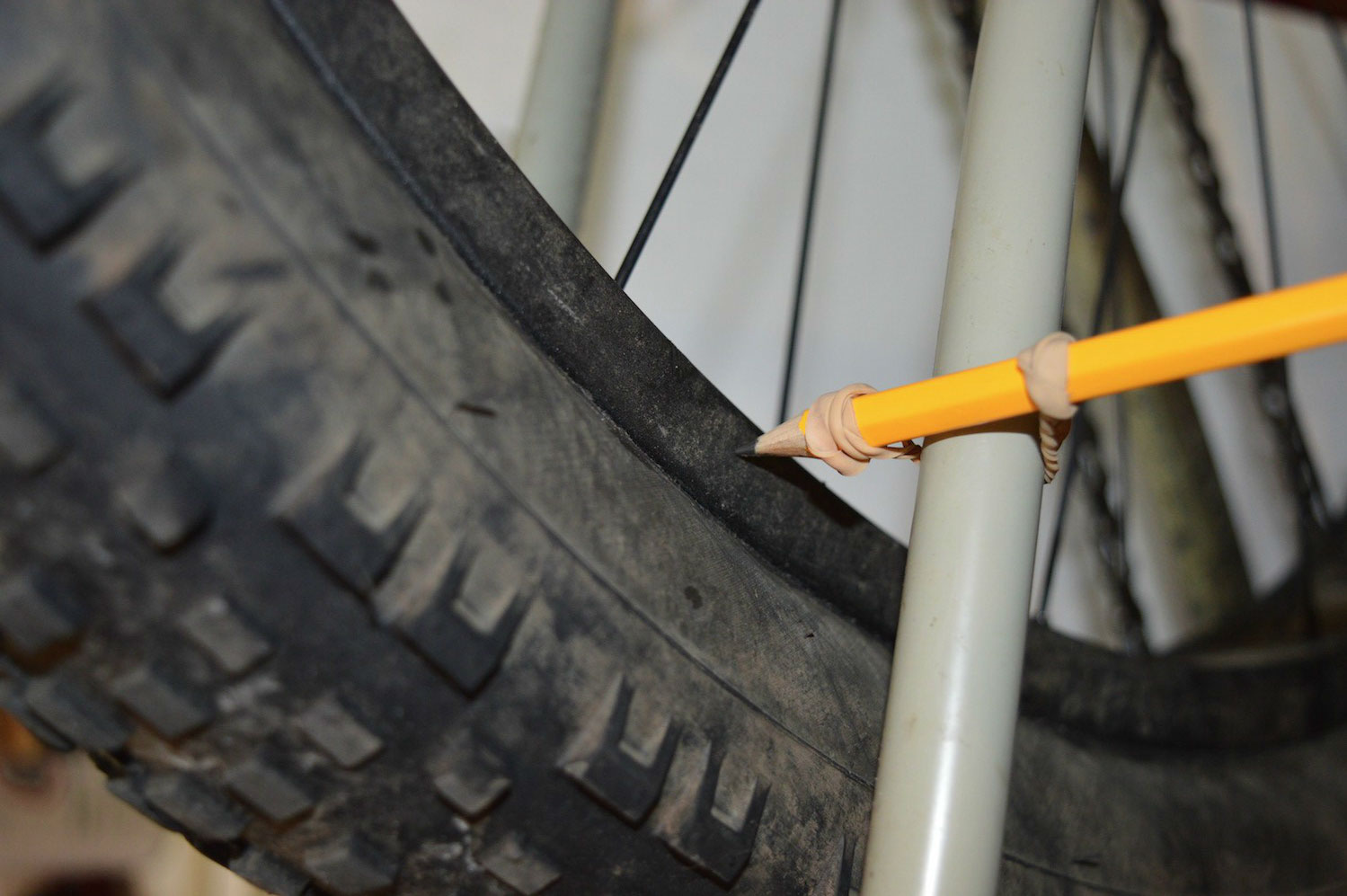 Turn the wheel by hand to see where the wobble is. Hopefully there's just one kink. If there's more than one, deal with them one at a time, starting with the worst. Set your guides close enough that the wheel rim just touches where the buckle is. Memorise or mark each spoke where the rim touches. You could use small blobs of Blutak higher up the spokes or PostIt notes wrapped around the spokes.

Spokes attach to the rim from either side of the hub. When you tighten a spoke, you pull the rim over to that side. If you keep tightening you'll pull the rim in towards the hub as well, so that it's concentrically out of true. Unless the spoke you're tightening is very loose to begin with, you may therefore need to loosen spokes from the other side so that you're not over-tightening any spokes. Loosening spokes moves the rim away from that side. Since many wheels have their spokes insufficiently tensioned, always start by tightening spokes, not loosening them.

You tighten spoke nipples anticlockwise. While spokes are threaded normally, you're tightening from underneath. If you were to tighten a nipple from the top side of the rim with a screwdriver (after removing tyre, tube and tape) you would turn it clockwise.

To get rid of the buckle, tighten the spoke(s) on the opposite side to the buckle. Start with the spoke in the middle of the buckled section. Tighten it half a turn. Turn the wheel by hand to see what effect this has had. If the buckle is still there, tighten other spokes from the same side that are in the buckled zone, working out from the central spoke. On conventionally-built wheels, spokes enter the rim from the left and right sides alternately, so after tightening the central spoke you'll be working on the spokes that are next-but-one either way.

If the buckle is still there after you've tightened any spoke by a full turn, then assuming that spoke feels tensioned – something you can feel as you turn the spoke key – it's time to loosen spokes on the same side as the buckle. Start with the ones immediately adjacent to the central spoke you've been tightening and loosen them half a turn, working outwards with smaller turns if necessary.

Truing a wheel takes patience more than skill. Work incrementally, checking the wheel after each adjustment. You should be able to reduce sideways wobble to under a millimetre. If everything goes pear shaped (pretzel shaped?), don't panic: it's fixable. Take your wheel to the bike shop.