How to Safely Navigate Roundabouts on a Bike 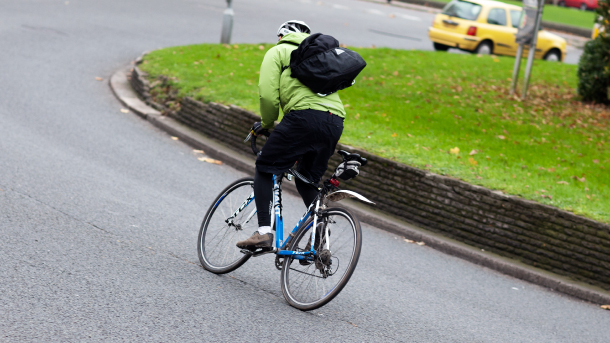 Negotiating roundabouts by bike is straightforward if you ride assertively and stay away from the edge - learn more in this expert guide from Cyclescheme.

Roundabouts can be quite intimidating on a bike. It doesn’t help that some drivers use them badly, barging into the traffic flow and failing to use their indicators correctly. Nor does it help that the advice on roundabouts for cyclists in the Highway Code is flat out dangerous. Rule 62 says ‘you may feel safer… keeping to the left on the roundabout’. You might, and some cycle lanes even guide you into that position. But you are not safer.

As you get closer to the roundabout, ensure you’re in a gear that you can accelerate in. As long as you’re not going straight on, signal left or right for the benefit of drivers behind you.

Give way to traffic on the roundabout, joining when it’s safe to do so. Take your lane. This dissuades drivers from cutting across you. Signal left as you approach your exit. Exit the roundabout.

Give way to traffic on the roundabout, joining when it’s safe to do so. Take your lane. On a multi-lane roundabout, take the left-most lane that goes straight on; it will make it easier for you to exit the roundabout and should dissuade drivers from ‘undertaking’ you. Signal left as you pass the exit before the one you’re taking. Exit the roundabout.

Give way to traffic on the roundabout, joining when it’s safe to do so. On a two-lane roundabout, you’ll usually want to join the lane closest to the centre. On roundabouts with more lanes, pick the left-most lane that’ll take you where you want to go, which will probably be the left-most lane but one; the latter is where left-turning and straight-on traffic will be. Once you’ve reached your lane, take it. Signal left as you pass the exit ahead of yours, check for traffic over your left shoulder, and peel off left, making no sudden changes of direction.

If you drive, you’ll note that these instructions are not really any different from how you’d negotiate a roundabout by car. Bicycles are traffic just like cars are. Act like it and you’ll be treated like it.

Take your lane. In particular, give room to give way markings when you’re on the roundabout. Staying away from the edge makes you more visible and it buys you time if drivers see you late.

Make your intentions obvious: you’re telling drivers what you’re about to do, not meekly asking permission. If drivers know what you’re doing, they can react accordingly.

If you’re not comfortable negotiating a particular roundabout, whether it’s a two-lane one or a multi-lane gyratory, don’t. Get off your bike before you reach the roundabout and negotiate it as a pedestrian instead. It won’t add that much time to your commute.

Be very careful at roundabouts after recent rain, when spilled diesel that was dry will become slick, or in icy conditions. You will be turning and you may need to brake while cornering. It’s all too easy to slide off.

How to save money on a new bike with Cyclescheme

Since you’re saving money and spreading the cost, even expensive bikes are affordable through...