Round Up: What lights do I need for my commute?

The best choice of lights for seeing and being seen while cycling at night will depend on the route that you’re taking.

For riding in the dark, which the law defines as the time between sunset and sunrise, you need lights that are not just legal but practical for the environment you’re cycling in.

The legal stuff is surprisingly complicated but boils down to: white front light, red rear light, both fixed to the bike and both meeting certain minimum standards. If you have no lights or defective lights, you could be stopped by the police and charged. (You might also run into an unseen pothole or be hit by a car!)

If you have lights that are decent but that don’t meet cycle lighting regulations, you’re unlikely to find yourself in trouble with police but your non-compliance could be used against you in a court of law in the event of an accident. Conversely, an approved light may be okay in law but inadequate in practice.

Here’s some advice on battery lights for different settings.

Without streetlights, your front light must have a beam powerful enough to easily pick out pedestrians, potholes, and ‘road’ furniture. But you won’t be travelling fast, particularly if it’s a shared path, and won’t need a wide-angle beam like night-time mountain bikers do. So avoid dazzlingly powerful headlights and torches; a cycle-specific light with a focused beam and around 300-500 lumens will be fine. For the rear, any reasonably bright light will suffice. Pick front and rear lights with some side visibility to make you more conspicuous at junctions.

Urban side roads have streetlights so the primary role of your cycle lights is to make you obvious to other road users; you don’t need a strong beam to light your way. Since traffic will be travelling slower – the default speed limit will be 30mph, or 20 if you’re lucky – being seen from half a mile away isn’t important. What is is that your lights are visible from a wide arc front and rear, not just directly in front or behind, as there are likely to be lots of junctions. Flashing or pulsing lights work well under streetlights. Others can still track your position easily, thanks to the streetlighting, and they’re more likely to notice you in the first place. 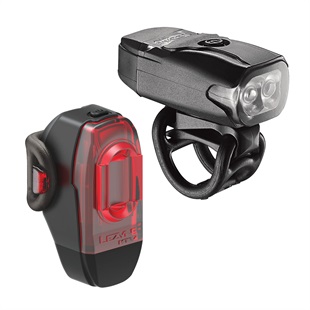 Main roads carry more traffic so there’s a lot of visual noise. Weak cycle lights will get lost in the wash of drivers’ head and tail lights. It’s vital that you’re easily visible – and from further away. Traffic travels faster on main roads; even urban ones may have a speed limit higher than 30mph. So use powerful, highly visible lights. Avoid the temptation to fit a mountain biking front light that will dazzle other road users, however. Most of these lights can’t be ‘dipped’. Instead, look for a powerful light with STVZO approval, a German certification that makes it an approved light in the UK too. The rear light needs to be bright enough to be seen from a long distance behind. Look for 50 lumens or more. Avoid using a flashing rear light unless you also use a steady one, as a flasher won’t signpost your trajectory in the dark. Pulsing rear lights are okay.