Like regular bikes, e-bikes come in all sorts of different designs. The right one for you will depend on your specific needs and budget.

There are electric-assist versions of just about every bike type, from folders to mountain bikes. They’re all legal to ride on UK roads without a driving licence, vehicle registration, or a motorcycle helmet – as long as they meet certain criteria. They must only provide power when you’re pedalling. The maximum assisted speed is 25kph (15.5mph), at which point the motor must cut out. And the motor must not provide more than 250 Watts of sustained power (on top of your own).

These similarities give you a lot of leeway when it comes to using the ‘wrong’ e-bike for commuting. An e-mountain bike with draggy tyres might get you to work just as quickly as a svelte e-road bike, since both will easily do 15mph with motor assistance. The difference is that you’d have to recharge the e-mountain bike’s battery sooner, as its motor would have to work harder. Similarly, you could use an e-cargo bike or folding e-bike for a hilly commute that would be utterly impractical on unpowered versions.

Having said that, it makes sense to get an e-bike that’s well suited to what you’ll be using it for most often. Here’s a run down of some of the more common types.

The default e-bike. It has a flat handlebar, a fairly upright riding position, and medium-width tyres. Many e-hybrids come with mudguards, a rear pannier, and lights, and those that don’t can have them fitted. If you’re not sure which type of e-bike you need, you probably want an e-hybrid. It’ll be good for riding around town and on country lanes but will also tackle smoother off-road tracks such as towpaths and forest roads. Price-wise e-hybrids cover the map – anything from just under £1,000 upwards. 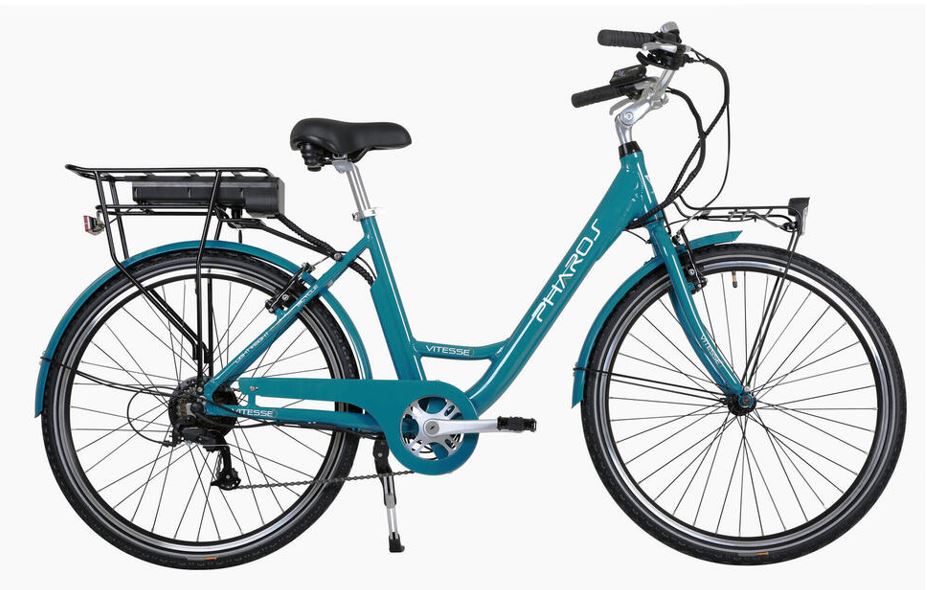 E-road bikes come in two broad types: mid-motor e-bikes, with a large battery and a weight of around 18kg; and rear-hub motor e-bikes, with a smaller battery hidden in the down tube and a weight of around 13kg. Which is best depends on how you ride. Heavier mid-motor e-bikes suit road cyclists who won’t often exceed 15.5mph and who want electric assistance all the time, because the bigger battery means greater range. Lightweight rear-hub motor e-bikes suit road cyclists who will often ride faster than 15.5mph and who mostly want help on hills, when they’ll be going slower than this. That’s because these e-bikes are easier to pedal without electric assistance. Either type can work well for longer distance commuting so long as it will accept the accessories you want to fit. Expect to pay over £2,500 (RRP). 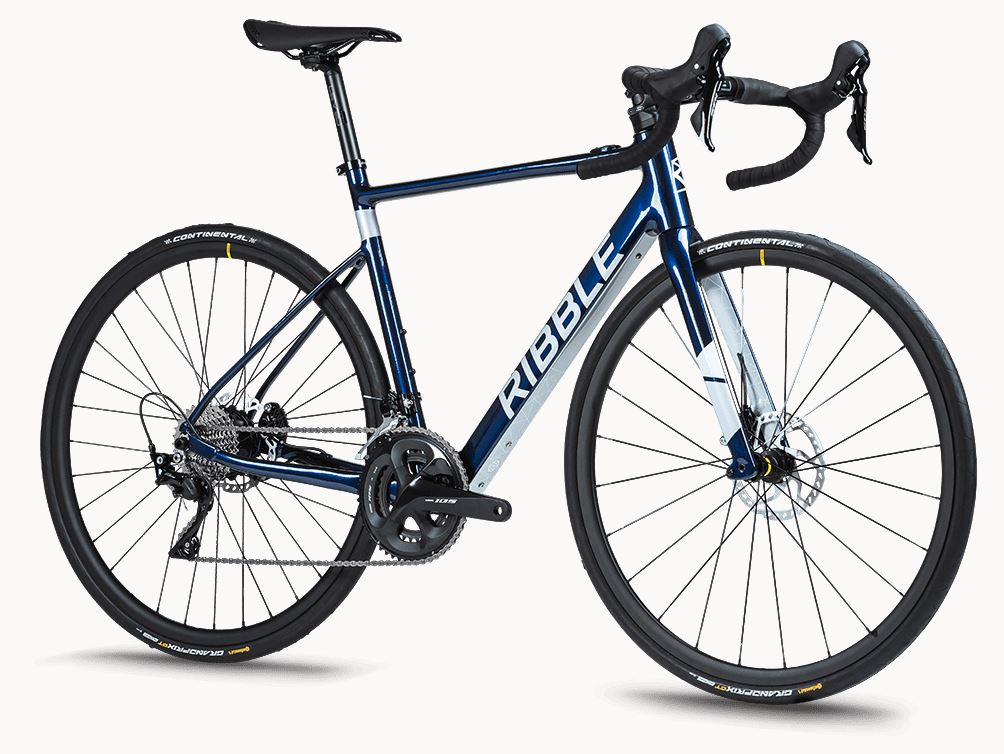 E-gravel bikes are like e-road bikes with wider (32-47mm), lightly treaded tyres. Like an e-hybrid, they’re designed to tackle easy off-road trails as well as tarmac. So they tend to have slightly different frame geometry and a wider drop handlebar to aid bike control off-road. They’re more likely to have fittings for mudguards and a rear rack than e-road bikes. Along with their overall versatility and better performance on bad roads, this makes e-gravel bikes a better choice for commuting than e-road bikes for most cyclists. As with e-road bikes, you can get lightweight models with a rear-hub motor or more heavy duty ones with a mid-motor. Again, expect to pay over £2,500. 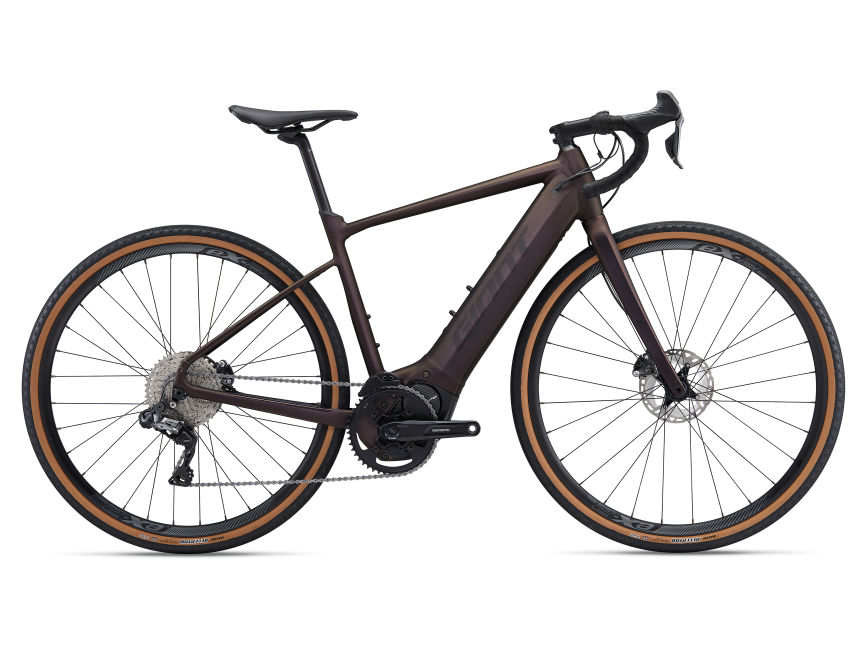 Most e-mountain bikes are overkill for commuting. They’re designed for technically demanding singletrack trails, not tarmac. The best ones have high-torque mid-motors that will cope with steep off-road climbs, suspension front and rear, and little scope for attaching practical accessories. Unless you’re commuting on serious off-road trails or are using the same bike extensively for recreation, there are more suitable options. A cheaper hardtail mountain bike with a rear hub motor and a brick-like battery on the down tube will, ironically, probably be better on road than off. Such an e-bike is better thought of as a more rugged e-hybrid, and could work fine for commuting. Expect to pay over £4,000 for a full-suspension e-MTB or from £1,500 for a hardtail. 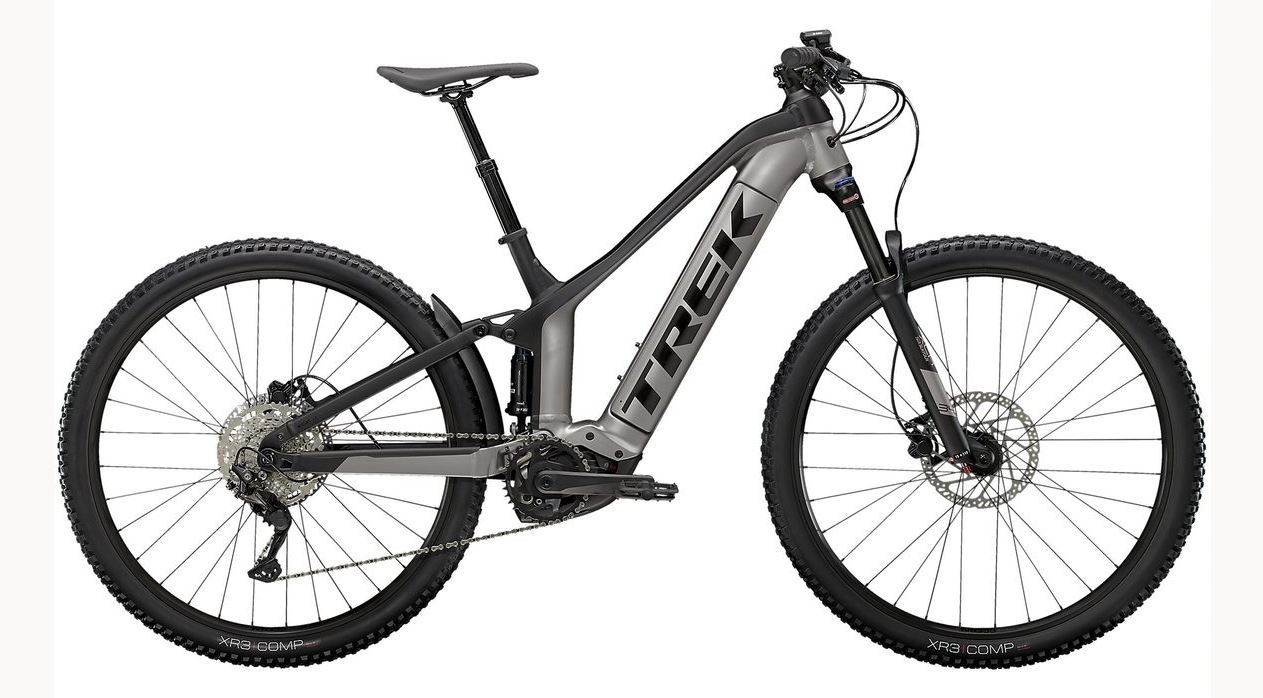 A folding e-bike has the same advantages as an unpowered folder. You can take it on trains (and often buses and trams) without a reservation or fuss, as it travels as luggage. You can easily store it indoors at home or at work, so your expensive e-bike is less likely to be stolen or damaged. Folding e-bikes can be ridden much further than most cyclists would want to commute on an unpowered folder. Ten miles is a long way on a Brompton; on a Brompton Electric it’s nothing. Compared to other e-bikes, folding ones tend to have a shorter range: they have smaller batteries and lighter (but less efficient) hub motors. You don’t want a folding e-bike to be too heavy because you WILL have to lift it. Prices: budget ones £1,000-£1,500; twice that for Brompton Electric or Tern Vectron. 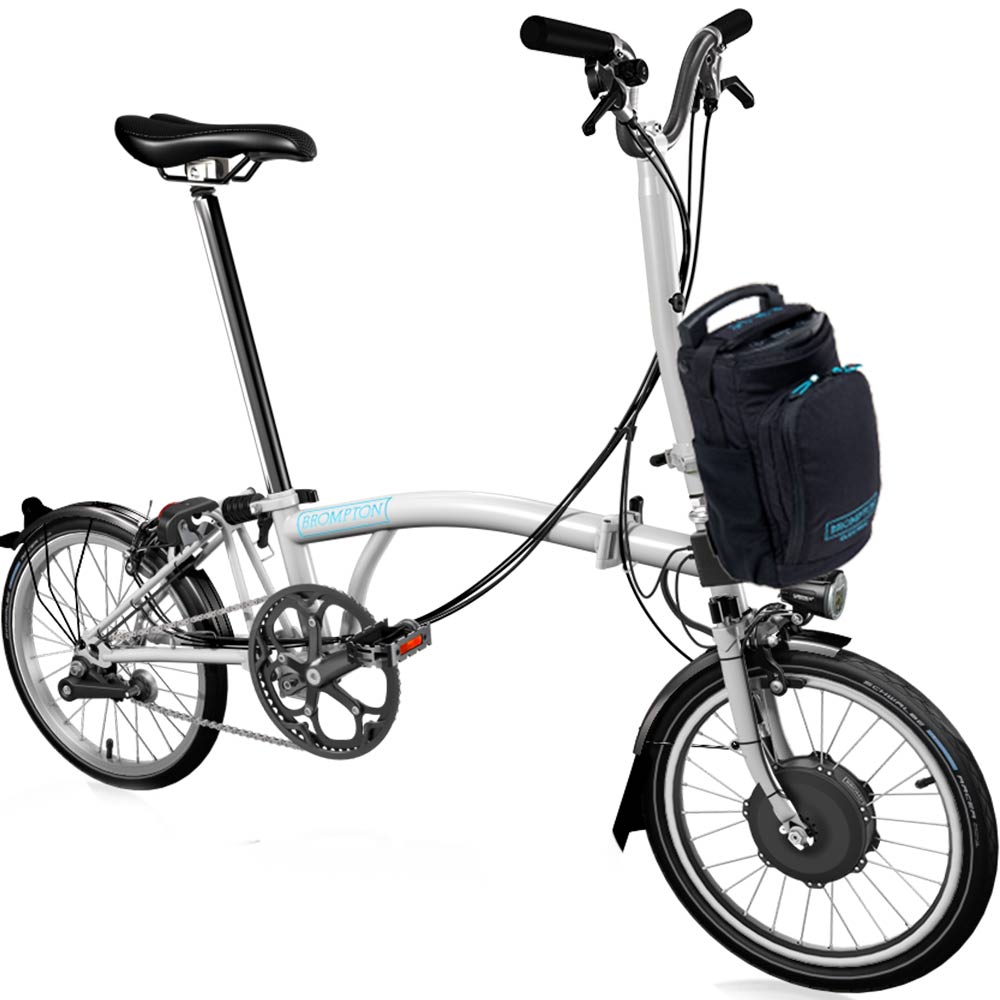 E-cargo bikes come in three general types: platform or box in front, between the rider and the front wheel (sometimes called a ‘bakfiets’, its Dutch name); a longer, heavy duty rear rack behind the rider (a longtail); or a trike, with the box in front or (less often) behind. Trikes can carry the biggest loads but won’t always fit through gateways, doorways, bollards, or cycle path barriers; two-wheelers are easier to live with. Any e-cargo bike can replace a family car (or second car), as it will carry an adult and a couple of children and/or a huge grocery shop. Like e-mountain bikes, e-cargo bikes benefit from a high-torque mid-motor to cope with hills. Prices start at around £2,000, with some over £5,000. 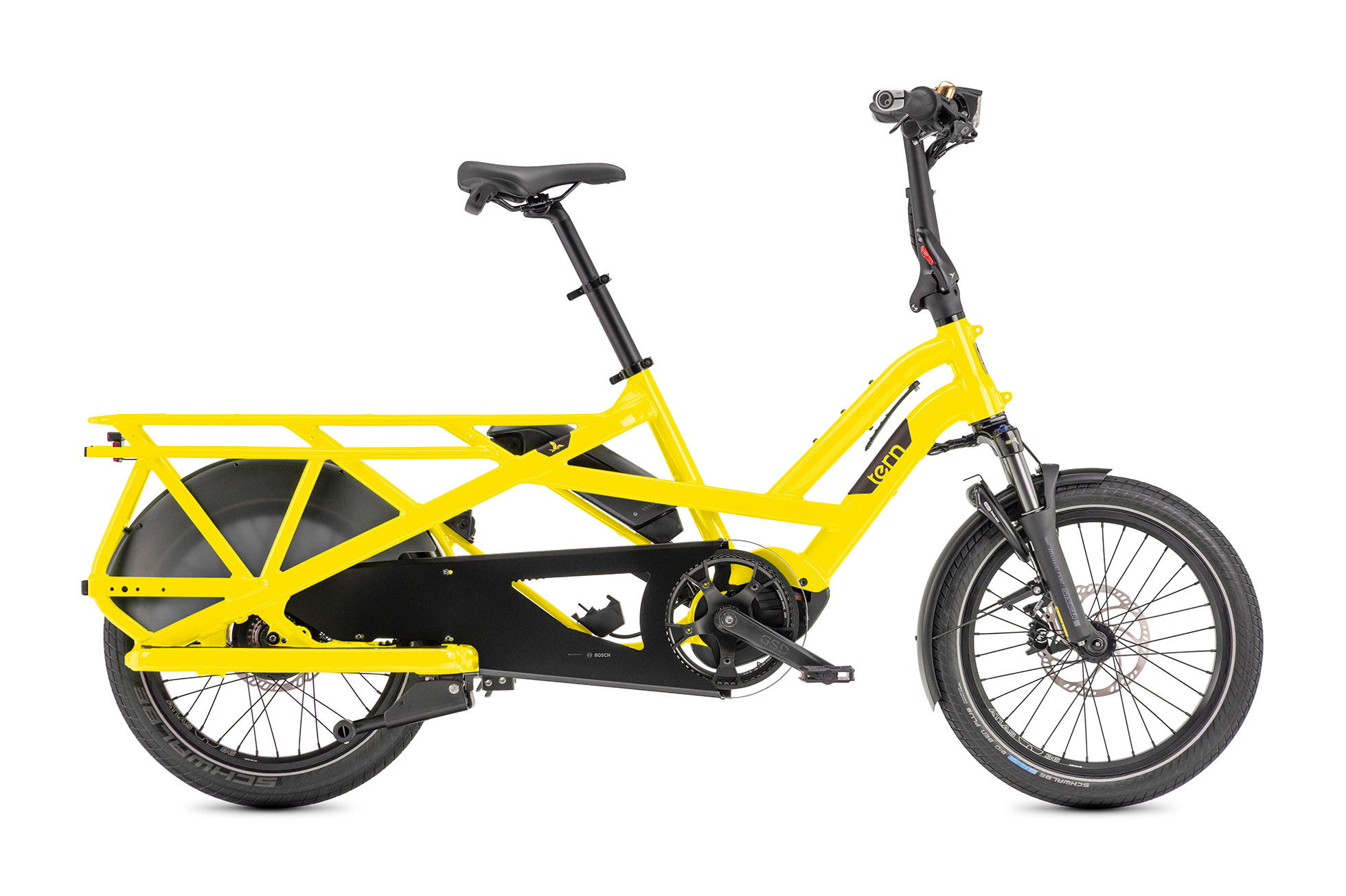 The motor will be in one of three places: the front hub; the rear hub; or at the cranks, which is known as a mid-motor. Front hub motors are the simplest and cheapest as they’re not part of the e-bike’s drivetrain. They’re popular for converting regular bikes into e-bikes and for folding bikes, where a chunky mid-motor might interfere with the fold.

Rear hub motors are bit more complex as they have to deal with your pedalling forces, but the motor itself still doesn’t benefit from the bike’s gears. They tend to have less torque than mid-motors and aren’t so good at delivering power at slow speeds, such as on steeper hills. Hub motors of both kinds are more often found on less expensive e-bikes. But dearer, lightweight e-bikes often use rear-hub motors too. They’re lighter, for one thing, and they generally have less drag when pedalled without motor assistance – for example, because you’ve exceeded 15.5mph.

Lightweight e-bikes, folders, and conversions aside, most premium priced e-bikes use mid-motors. These are heavier and more complex. They also require a specially designed frame to accommodate them. But they’re more efficient, since the motor also benefits from the bike’s gears, and they deliver more torque. For steeper hills or heavier loads they’re usually the best option. Aside from weight, the only real downside is that you can usually feel some resistance when you pedal without assistance. It’s a bit like stirring treacle. This can be frustrating if you regularly ride faster than 15.5mph or if the battery dies.

On cheaper e-bikes, the battery will be attached to a rear rack or to the frame. On more expensive ones, it’s integrated into the frame. Battery capacity is best measured in Watt hours (Wh). A bigger number means a longer range. Manufacturers can’t give exact figures as the mileage per charge depends on rider weight, terrain, weather, and the assistance modes you use – you’ll go much further on Eco than Turbo. You can get a rough idea of the minimum range in kilometres by dividing the battery’s Wh number by 12. So a 500Wh battery should take you over 40km even in sub-optimal conditions.

How much to pay

The price of e-bike conversion kits – often over £500, sometimes £1,000 or more – gives you an idea of what it costs to add electric assistance to a bike. Factor in the price of a bike and it’s easy to see why e-bikes worth buying generally cost £1,000 or more. That will buy you a basic bike with a hub motor. E-bikes with a mid-motor and lightweight e-bikes with a rear hub motor usually cost over £2,000, while e-cargo bikes and e-mountain bikes can cost twice that or more.

You’ll save at least 25% by getting an e-bike through Cyclescheme. It’s still a significant sum. Could you have bought a secondhand car for that? Possibly, but you couldn’t run a car as cheaply. It costs pennies to charge an e-bike’s battery, and you don’t have to pay vehicle excise duty (‘road tax’), parking fees, MOT costs, or exorbitant insurance or garage fees. As with a normal bike, the yearly costs for an e-bike will likely be a few hundred pounds or so. For a car, it’ll be thousands.

An e-bike makes light of loads so take advantage of this. Accessorise it. Key additions, if it doesn’t come with them, include:

Mudguards. Any commuting bike needs these. You’re more likely to ride an e-bike in normal clothes that you want to keep clean, because riding an e-bike isn’t (or doesn’t have to be) a sweaty, athletic activity.

Lights. LED lights draw a tiny amount of power – and your bike has a huge battery. If your e-bike doesn’t come with lights (which will be wired into the main battery) check that similar ones can be added.

Sturdy kickstand. E-bikes are heavier than normal bikes, so it’s harder to balance them against a wall or bike stand. A kickstand means you don’t have to.

Lock. Some e-bikes have wheel locks attached to the frame but these are only good when leaving your bike momentarily. Get a good lock. Don’t worry about the weight. The motor will help you haul it.

Extra charger. If you have a long commute, it can be handy to leave a spare charger at work (or even in a pannier). That way you can top up the battery for the ride home if you’re running low.

Trailer. Most e-bikes are great for towing a child trailer or cargo trailer, thanks to the extra 250W available from the motor.

Riding and commuting by e-bike is awesome.