Cycling and the mental health benefits

Riding a bike is relaxing. If you’re stressed at work, you can often burn it off by cycling home. And if you’re dealing with a more serious problem, cycling can help you regain some balance in your life.

Most of us probably don’t give much thought to mental health. We’re managing okay – or just about managing – and, unlike physical health problems, the symptoms in ourselves and others can easily be overlooked. Yet mental health charity Mind reckons that one in four us will experience a mental health problem in any given year. That’s huge, an iceberg that we barely see the tip of before we or someone we know crashes into it. World Mental Health Day on 10th October is an attempt to raise awareness of mental health issues.

Mental health problems are widespread, varied, and complex. However, one of the things that can help is simple: get on a bike. 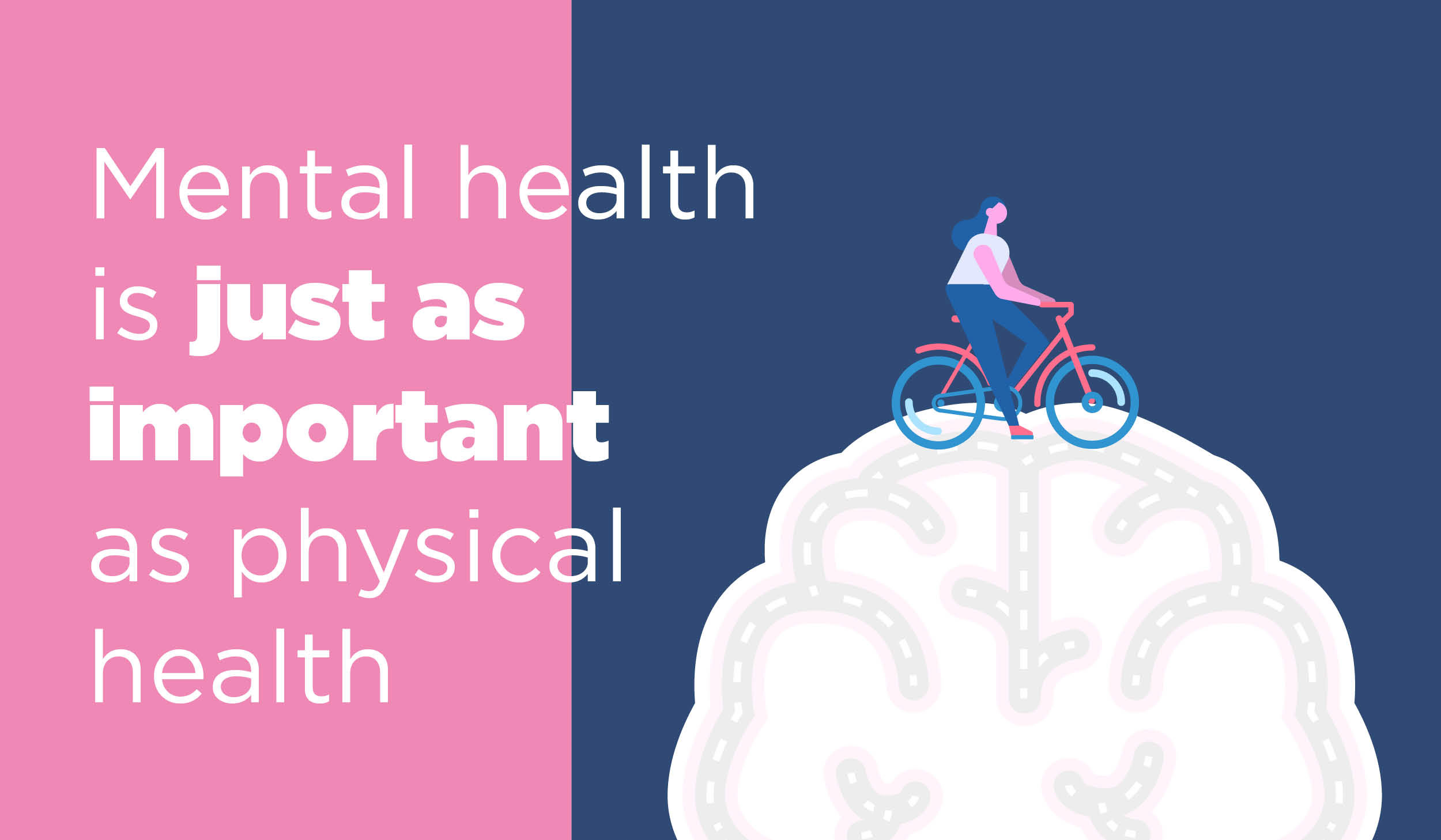 A healthy mind in a healthy body

The fact that physical exercise contributes to mental wellbeing has been recognised since Roman times; the poet Juvenal wrote the famous line ‘mens sana in corpore sano’.

Exercise is even more important if you do have a mental health problem, because, as Mind explains, ‘people with mental health problems are more likely to: have a poor diet; smoke or drink too much alcohol; be overweight or obese (this can be a side effect of taking medication).’ They’re also ‘twice as likely to die from heart disease and four times as likely to die from respiratory disease.’

Regular cardiovascular exercise such as cycling can mitigate these secondary physical problems. Better yet, it can often provide some help with the primary mental health problem.

Exercise like cycling has a range of benefits for mental wellbeing.

Aerobic exercise can reduce your levels of cortisol, the ‘stress hormone’. Any cyclist will recognise the reduction in tension that a bike ride brings. If you have a mental health problem there are bigger benefits, because stress can be a trigger for other conditions.

Aerobic exercise stimulates the release of endorphins, the ‘feel good hormones’, leading to a feeling of mild euphoria – the so-called ‘runner’s high’. This can reduce anxiety and make you happier.

Cycling promotes mindfulness, where you focus on the sensations of the present moment instead of being caught up in racing thoughts. You don’t have to think about anything except balancing the bike, pushing the pedals, feeling the breeze, and so on. This offers a break from brooding thoughts that might otherwise become overwhelming.

Exercise can make you feel more positive about yourself. As well as observing yourself becoming fitter, you prove to yourself that you’re up to the challenge of, for example, riding to work and back. It can give you a sense of satisfaction and self-control that helps you withstand stress better.

These benefits are all cited by Mind. The opinion of cyclists on the mental health benefits of riding a bike chimes neatly with them. Earlier this year, Cycling UK published Rides of Way, a survey of almost 11,500 off-road cyclists. An astonishing 91% of respondents rated off-road cycling as fairly or very important for their mental health – slightly more than those who said it benefited their physical health.

We’re so proud of the following statistics which show how much your fellow Cycleschemers value the way that Cyclescheme makes them feel. 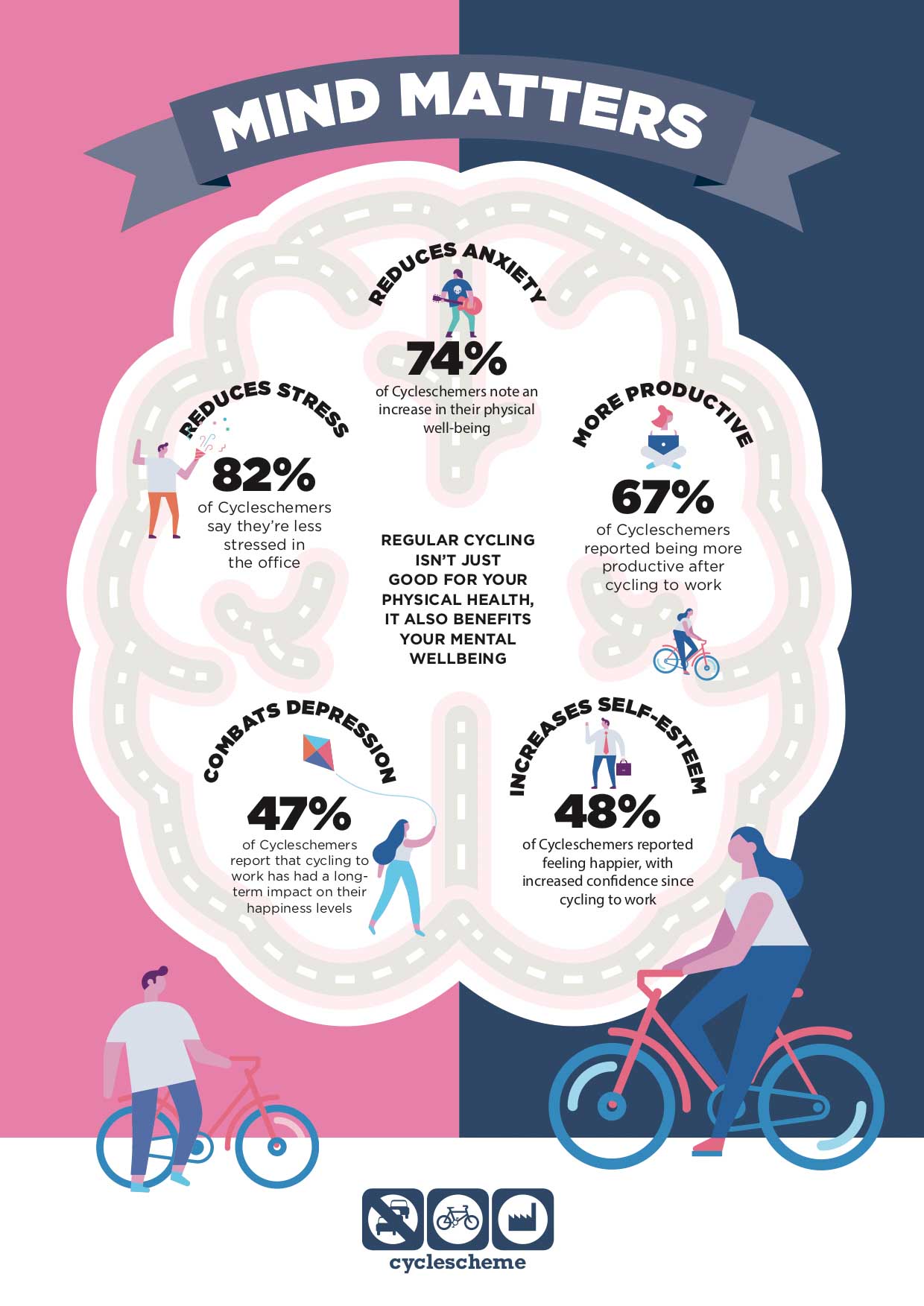 Why cycling works so well

Any physical activity is better than none when it comes to improving your mental wellbeing, but cycling is particularly useful. It’s low-impact, aerobic exercise that mosts people are able to engage in. It’s typically cheaper than gym membership over the course of a year or several years – and some studies have shown that exercising outdoors is better for your mental health than exercising indoors.

It’s exercise that you can undertake on your own or with a group, so it’s as social as you want it to be. It’s easy to cycle regularly because you can incorporate it into your daily routine – for example, commuting to work. It’s more economical than most forms of transport too; only walking is cheaper.

Knowing that exercise will do you good is one thing; getting around to it is another. If you’ve got a mental health problem, you may not feel like doing anything at all. So try to make getting on your bike as easy and pleasurable as possible. Don’t give yourself unrealistic targets; to begin with, just ride your bike, even if it’s for only 10 or 15 minutes at a time. Try to get on your bike in the morning – commuting to work or riding into town is ideal – as it may set you up for the day, mentally speaking. Get everything ready the night before, so there’s no reason not to ride. Or do your next-ride preparation immediately after your previous ride, when your body is still swimming with endorphins and you’re feeling positive.

Lastly, don’t forget that exercise like cycling only complements medication and mental health therapies. It isn’t a direct replacement. Don’t stop taking prescribed medication without the approval of your doctor and/or your mental health support team.