Do I need cycle insurance?

Wouldn’t it be useful to know what exactly cyclists are claiming for on their insurance, as well as what claims are successful and why?

We've teamed up with the bike geeks and insurance specialists Bikmo to show you exactly that.

For example; theft claims are now the number 1 reason people claimed with Bikmo in 2021, but accidental damage still remains a significant reason why cycle insurance is important to riders, accounting for 45% of their total claims.

That’s why it’s important to get covered, so you can have peace-of-mind while you’re on your bike, and when it’s parked up. Plus, don’t forget, as part of your hire agreement with Cyclescheme, if your bike is stolen or damaged beyond repair before it has been paid for, you’ll still be responsible for paying for it… all the more reason to get suitable cover for your bike. Get your quote in less than 2 minutes here

Most people think that their bike will be covered under their home insurance, however, be sure to check the fine print, as many home insurers have a very low limit to how much they’ll insure your bike for, and usually the bike will only be covered when it’s sat at home.

While the majority of claims are away from home, Bikmo has seen a rising trend in claims being made for bikes from home. Home claims represented 10% in 2019, rose to 18% in 2020, and now sits at a quarter of their claims.

The main worry people have is that their bike might get stolen, and rightly so. Theft has overtaken accidental damage as the top claim, but accidents still take up nearly half of all claims, so you may want to check you have cover for both theft and accidental damage at home or out and about on your bike. 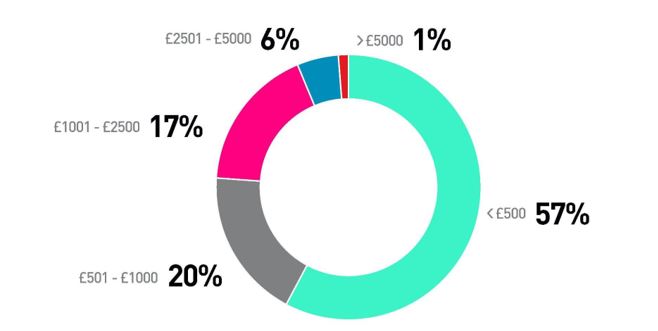 Using the right accredited lock is incredibly important to whether a claim can be paid out or not. Having a lock that is ‘Sold Secure’ is often essential to the success of a claim. Bikmo have been open and honest that this year, they have declined three times as many claims for theft than accidental damage, predominantly due to the locking requirements not being met.

Over 50% of claim payouts this year were for bikes and gear under £500, with over a quarter of their claims were for over £1,000. Bikmo is here to protect all Cyclescheme users, whichever way they wish to ride.

The majority of claims came from road cycling and commuting. Commuting (including ebikes) were up significantly from 2020’s data, showing more people are returning to offices or have chosen to find a more environmentally friendly way of getting to work.

The cycling landscape is forever changing and so is the claim data. But one thing remains; Bikmo’s mission to protect riders and get them back up and running if the worst ever happens.

If you’re buying a new bike with Cyclescheme, you’ll have the option to take out 14 days free cover with Bikmo, which includes cover for both accidental damage and theft. By activating your cover with Bikmo, you will have peace-of-mind whilst you get to know your new bike.

All Cyclescheme customers and friends can also benefit from exclusive savings on cycle insurance with Bikmo. Get a quote here!

The stats were originally posted on Bikmo’s Open Project blog.