Dual carriageways are the roads of last resort for cyclists. But when you can’t avoid them, you need to know how to ride on them.

Dual carriageways are roads separated by a continuous central reservation. They don’t always have two lanes in each direction; there might be one or three. The common denominator is that they’re designed for higher volumes of traffic, usually moving at higher speeds. Unlike motorways, it is legal to cycle on them. It’s not particularly pleasant but, depending on where you’re going, it may be your only option.

Nervousness about cycling on a dual carriageway is understandable. Lots of traffic! Travelling at up to 70mph! The chances are, however, that you already ride on some single carriageway roads with a 60mph limit. Dual carriageway traffic isn’t going much quicker and the road will generally be wider, straighter, and better surfaced, with fewer junctions and far longer sight lines.

Following traffic has more room to overtake you and can see you from further away – so long as you’re easily visible. There’s a good argument for using a flashing or pulsing rear light in daylight to draw attention to yourself. Lighter coloured clothing makes sense too. At night, effective lights and hi-viz clothing are a no-brainer. Many motorists won’t expect to see a cyclist on a dual carriage, so make sure they do!

On a dual carriageway traffic will usually be moving much faster than you, so it’s prudent to ride further to the left – perhaps a metre from the left-hand edge – rather than taking the lane . But avoid the temptation to hug the white line at the side of the road. This will encourage some drivers to pass you without deviating from their lane, passing you dangerously close. You want drivers to move out into the righthand lane to pass you, or at least straddle the line between the lanes.

Close passes are worse on a dual carriageway. Higher speeds raise the risk of serious injury. On top of that, you’ll find yourself buffeted by the slipstream of close-passing vehicles – especially large ones, such as articulated lorries and cars towing caravans. You’ll find yourself pulled towards the passing vehicle: forwards and to your right, towards the centre of the road. At worst, you could be blown off your bike (although that’s unlikely if you have a firm hold of your handlebar). Riding a bit further out in your lane discourages close passes and the attendant dangers.

Exit slip roads can be negotiated in a similar way. If the road is clear behind, you may be able to remain on the main carriageway as you pass the exit. Otherwise, follow the slip road, then cross it onto the cross-hatched spearpoint. Again, you’ll be crossing at the base of the triangle, not the tip. Then rejoin the main carriageway with care.

Sometimes there are marked cyclepaths through spearpoint junctions, indicating the best route for cyclists (as described above).

On high-speed dual carriageways, you’ll seldom leave the lefthand lane. On urban dual carriageways with slower speed limits and more junctions, you may find you need to switch lanes. If there's no traffic behind, there’s no problem: just go to whichever lane you want to be in. If there is traffic, break it down so that you're changing one lane at a time. Look back, signal, eyeball the driver behind to check you can move out, and move towards the right of the lane you're in. Then hold your position. When there's a gap or a courteous driver gives you a gap, move over into the next lane. Repeat as necessary.

If you don’t fancy switching lanes for a roundabout or other junction, pull over to the left of the road, dismount onto the pavement or verge, and walk around the junction, carefully crossing other exit/entry roads on foot until you reach yours.

Signs to watch for

You can cycle on most dual carriageways but not all. Where cycling is prohibited, it will be clearly indicated with ‘no cycling’ signs. That’s a bicycle on a white background inside a red circle. This no cycling sign may be part of a larger green road sign giving directions. 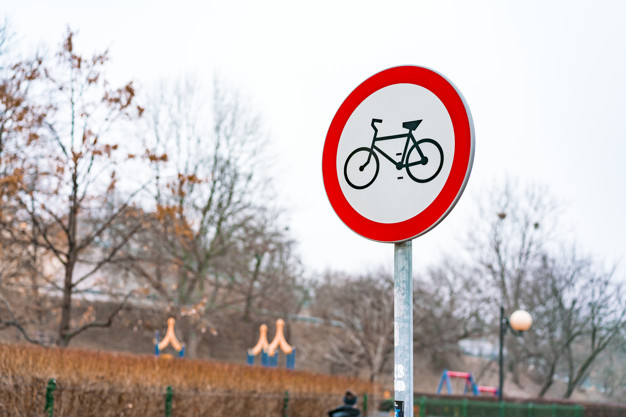 Sometimes dual carriageways turn into motorways from one junction to the next. The A1 does this where it becomes the A1(M), for example. At cycling speeds you can’t miss the big blue sign telling you that the road is about to become a motorway. Take heed and leave the dual carriageway, following the sign for ‘non-motorway traffic’.