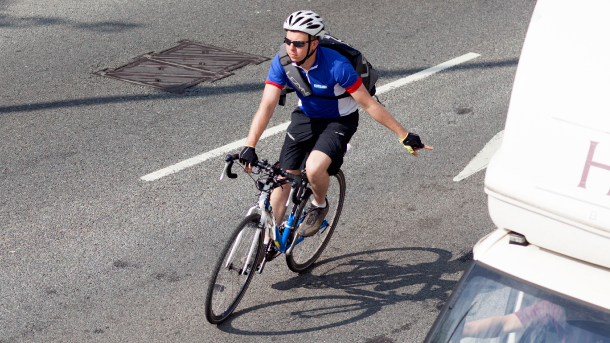 Where's the safest place to cycle on the road? The answer might surprise you. Learn all about road positioning in this expert guide from Cyclescheme.

Reducing risk on the road

It can feel safer to ride in or near the gutter. It isn't safer. It vastly increases the chances of drivers buzzing past you with inches to spare. You'll have to contend with drains, cambered surfaces, and debris like broken glass that has been 'swept' to the edge of the road by the action of car tyres. And you're less likely to be seen at all by drivers.

The commonest type of car-cyclist collision is the 'Sorry, mate, I didn't see you' variety. You must register in a driver's field of vision. You'll do that best by cycling where they are looking. Drivers look where their vehicle will be in the next few seconds, which is to say: ahead of them. They pay much less attention to people and objects in their peripheral vision.

Initially, you may feel exposed riding further out from the kerb. But it's very rare for cyclists to get rear-ended by drivers.

Being safe is being seen – and forcing drivers to react to your presence.

By riding further out from the edge of the road, you force following traffic to overtake you properly instead of squeezing past dangerously close. Are you inconveniencing anyone? Only those drivers who would not have overtaken you safely in the first place.

As a rule of thumb, your distance from the kerb is the same distance that drivers will give you when overtaking.

How far from the kerb should you ride?

You never want to be closer than 50cm from the kerb. Often you'll be a metre out, sometimes more. The key factor is not so much the edge of the road as the location of the traffic stream on that road; that is, where cars are actually driving in that traffic lane.

The other position is about a metre to the left of the traffic stream, so long as that doesn't bring you too close to the kerb. Sometimes called 'the secondary position', you can think of it simply as 'not taking the lane'.

When to take the lane

If you can keep up with the traffic, such as around town, it's safest to take the lane. It's also the position to adopt when you want to dissuade drivers from doing something stupid, like cutting you up. Here's a non-exhaustive list of situations when it's best to take the lane.

When not to take the lane

If you're not confident in taking the lane, especially when simply riding along, don't feel that you have to. If the road is busy and the traffic is moving faster than you can, either because it's a fast road or a steep hill, you're often better not taking the lane. This is a courtesy to drivers, enabling them to overtake you more easily.

Your safety is paramount, so you should not feel pressured not to take the lane. If a driver pips his horn at you, relax in the knowledge that he has seen you.

Unless you're taking evasive action, any change in position should be gradual – particularly when moving out to take the lane. Check back to see where any following traffic is, then gradually move into your new position. If you check back early enough, you may not need to signal to change your position within a traffic lane. Signal when you need to communicate your intention to drivers who are closer.

Don't assume that you can move left to the secondary position without checking behind you. Around town, another cyclist or a moped rider may be about to 'undertake' you.

Finally, don't tailgate motor vehicles. It reduces your visibility – in both senses – and bicycles can't stop as fast as cars, so you risk rear-ending a car if it stops suddenly.

Or head over to British Cycling’s website. They have created the ‘Commute Smart’ series; a collection of short videos that tackle common commuter questions and provide handy advice for staying safe on two wheels.

The road positioning a cyclist takes is always a diverse subject - particularly for non-cycling road users! Consequently it can sometimes be difficult for new cyclists to get practical and legal advice. In the video below British Cycling provide a handy 6-point guide to road positioning when you’re on two wheels. This includes guidance on when best to adopt the ‘default’ and ‘taking the lane’ positions, the importance of eye contact, and how to cycle with a companion.

Watch the video below for straightforward advice to help you on your next cycle commute.