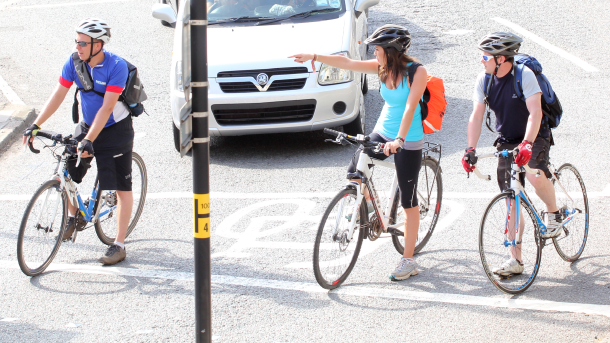 Watch the helicopter shots of the Tour de France and you'll see the riders wheel as one, like a flock of birds. They ride in such a tight group for one reason: it saves energy.

Watch the helicopter shots of the Tour de France and you'll see the riders wheel as one, like a flock of birds. They ride in such a tight group for one reason: it saves energy. It takes about a third less effort to ride in another cyclist's slipstream. You don't have to be a racer to benefit: you can enjoy the same effect on a summer sportive, a weekend club ride, and even the commute to work.

Cycling with others isn't just about sharing the effort. It's more sociable because, in the right conditions, you can chat as you cycle. What’s more, families cycling in a group can use road positioning to 'shield' child cyclists.

Group Cycling and the Highway Code

The Highway Code for cyclists says you should: 'not ride more than two abreast' and 'ride in single file on narrow or busy roads'. Be warned: most motorists are oblivious to the two-abreast rule. Most also ignore Rule 139, which requires them to give cyclists 'at least as much room as a car' when overtaking – a rule that makes single or double file a moot point. You, however, should heed the Highway Code: don't ride more than two abreast, and be ready to switch to single file when circumstances dictate.

When to Cycle in Single File

If you're on a narrow road without a clear view ahead – approaching a corner, for example, or a blind summit, cycling side by side can be dangerous. It makes sense to cycle in single file, otherwise the outer rider(s) may be at risk from oncoming traffic. Oncoming traffic itself may also require you to ride single file. If there is traffic behind you, single out if it can pass safely. If it can't, you can prevent dangerous overtaking by continuing to cycle in double file or by singling out and taking the lane.

Cycling two abreast can actually make it easier for motorists to overtake a group of cyclists safely, as the column of riders will be shorter so the driver can get past in one manoeuvre rather than leapfrogging up the line, possibly cutting in dangerously.

To go from double file to single, the inside rider (nearest the side of the road) accelerates while the rider on the outside eases off, braking if necessary, and tucks in behind. This avoids one rider cutting up another.

Because it takes more effort to ride in front where there's no shelter from the wind, the unspoken rule is that cyclists in a group take it in turns to lead. This turn might last only a minute or two. Then the lead rider will peel off, dropping to the back of the group. The second placed rider will do a turn, then peel off, and so on.

It's bad manners to sit behind someone for miles; racers call it wheel-sucking. If the group is of different ability, however, and you want to ride together, it makes sense for the stronger rider(s) to spend more or all of the time at the front.

To get the benefit of slipstreaming, you need to be less than a bike length behind the rider in front. Professionals are often only inches apart. Don't go that close to begin with, and ride a little offset, so you're both behind and slightly further out. That way you can go around the rider in front in an emergency.

Braking suddenly is bad news in a group. Everyone should ride as predictably and fluidly as possible, with no sudden accelerations, decelerations or swerves. Stay away from cyclists who ride jerkily or erratically, especially in sportives where the sheer number of cyclists can mean less room to manoeuvre.

Communicating with Your Cycling Group

Having confidence in how those around you ride comes from good communication rather than expert bike handling. Make warnings simple and loud and repeat them all the way down the group. More experienced group cyclists use a kind of spoken 'shorthand' – coupled with simple sign language. Here are some examples.

• Easy – back off the pace, there's trouble ahead

• Out – swing out to get around an obstacle, like a parked car

• Hand out to one side – we're turning right/left

• Hand sweeping behind the rider's back – move in or out, in the direction of the gesture

• Hand patting downwards, or simply held out palm down – slow down

• Finger pointed at the ground – pothole/obstacle

If you're riding with your child on the road, the best place for you might seem to be the front. It's not. Ride behind. That way you can see what your child is doing at all times and give instructions. Road positioning is important too. Your child should ride in the secondary position, perhaps a metre out from the road edge, while you take the lane – or at least ride substantially further out into the road. This ensures that any overtaking traffic must come wide around you, which will give your child much more room.