More cycling is good for staff and employers alike, but it can be hard work to persuade non-cyclists to start. They may just need a nudge…

While many of us are working from home at the moment, others are still commuting to work. To these commuters the Government is saying: ‘walk or cycle to work where you can’. That will limit exposure to the virus on public transport while staving off gridlock from too many drivers taking to the roads. There’s a problem with telling people they should walk or cycle, however: It doesn’t necessarily work.

If cycling to work is something that’s never crossed your mind and is something you can’t even conceive of doing, the easiest response to the proposition ‘cycle to work where you can’ is: I can’t. Even if a non-cyclist has thought about it, they’re likely to have written it off as impossible (don’t have a bike) or unappealing (too much traffic, too much effort). It’s difficult to change ingrained behaviour. That’s where nudge theory comes in.

What is nudge theory?

Nudge theory aims to make it easier for someone to make a decision that’s in their own self-interest. One example is stocking fruit by the checkout in a shop to make customers more likely to buy it, whilst stocking junk food below or above eye level in a less obvious part of the store. There’s no specific appeal to eat more fruit and no exhortation to eat less junk food. It’s an indirect suggestion.

Then there’s positive reinforcement. You don’t have to look outside cycling for an example. People are more likely to consider riding a bike if they see other people like themselves – normal people in normal clothes – on bikes. If cycling’s image is of sporty people in Lycra, that’s the people it will attract.

So that’s nudge theory. How can you apply it to encourage more of your staff to start cycling to work? Here’s a handful of suggestions.

Install good quality cycle parking right by the entrance to your workplace. Not only is this useful for existing cyclists, it reinforces the door-to-door convenience of cycling and it puts bikes in view of non-cycling staff. You could also put up signs to direct staff and visitors to ‘cycle parking this way’. How about a painted cycle lane from the site entrance to the cycle parking? 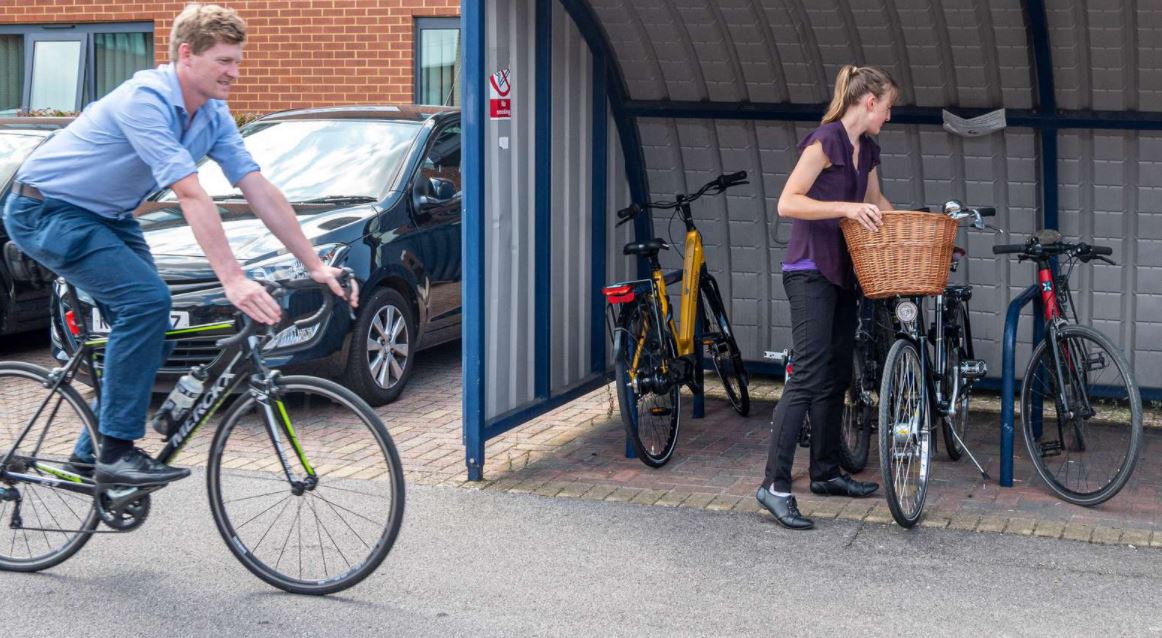 Not literally. Workplace pensions see better uptake when they’re opt out rather than opt in. But you can’t know how much a given employee would want to spend on a bike and equipment, and some might resent feeling like they’re being forced into taking part. Instead, work on the assumption that staff will want to opt in. Don’t just ask a generic ‘who wants to sign up?’ to an open forum - give each staff member a financial breakdown for a few different Cyclescheme packages based on their personal salary. Show them how easy it is to apply and how well they will be supported if they go for it.

Get them on an e-bike

For anyone who thinks cycling is physically too demanding, an e-bike is the answer. But would-be, could-be, should-be cycle commuters won’t realise this unless they try one. So arrange a demo day at your workplace with a local Cyclescheme retailer. Or buy a pool e-bike and randomly assign it to a staff member each week. It would be up to each employee what they do with it or even whether they take it, but assuming they do so it gets them on a e-bike for an extended trial. A folder like a Brompton Electric or Tern Vektron would work well as a pool e-bike as either will fit riders of almost any height, can be taken on public transport or in a car boot, and can be stored indoors. When they return the bike, give them a print-out explaining how they could get this, or a different bike, through Cyclescheme and what it would cost them.

Show, don’t tell, how nice cycling can be

Non-cycling staff won’t realise how nice cycling can be. So take advantage of the fact that almost everyone has a smartphone and show them. Put links on your company intranet to free route-following apps, such as BikeGPX or Komoot. You could pick some best-option point-to-point bike trips that end at your workplace, or a short loop to a local park that staff could do during a summer lunchtime. Take it further and make some cheap, universal smartphone holders available to borrow or keep, such as the BTR Silicone Handlebar Mobile Phone Mount or the Bike Citizens Finn Universal Phone Holder.

Information in their eye line

You can find plenty of promotional materials on your MySchemes account.