How to cycle in low sunlight

Winter sunlight can dazzle drivers and cyclists alike. Here's what you can do to see and be seen.

Sunny winter days are a welcome respite from greyness, rain, or snow, but they can carry an additional risk: blinding, bright low sun. The sun never gets high in the sky at this time of year, and it's at its lowest in the morning and late afternoon – just when you're likely to be commuting. It's worst when looking uphill into the sun.

The Highway Code, Rule 237, states that ‘if you are dazzled by bright sunlight, slow down and, if necessary, stop.’ The main hazard for cyclists is when a driver is dazzled and can no longer see the cyclist. Whilst it’s important for other road users to keep this rule in mind and act sensibly, it’s vital that you also ensure that you can see properly. If nothing else, this will give you the best chance of a fast reaction, should something unexpected happen.

Sunglassses are a simple and effective way to cope with low sun on a bike. You may wish to invest in some cycling glasses as these have more wraparound coverage, which helps to stop your eyes from watering in the wind.

Very dark sunglasses can obscure your vision when you move from strong sunlight directly into deep shadow so they won't suit all commutes. Photochromic lenses, meanwhile, will not darken or lighten quickly enough to cope with fast changing conditions of sunlight and shade. If you're going to take your glasses on and off, you'll need master the art of resting them on your head or helmet, like road racers do. Alternatively, lighter-coloured lenses – such as yellow or orange - will reduce glare, without compromising your vision in the shadows. 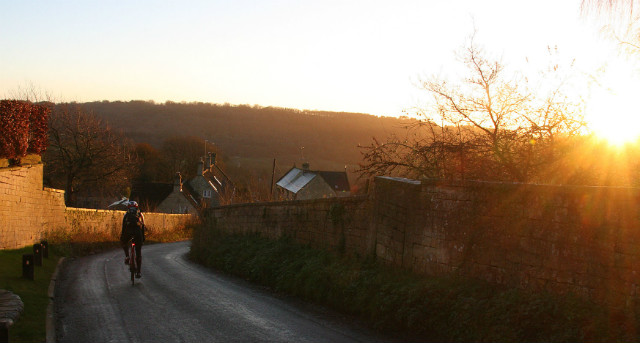 Alternatively, you could wear a peaked cycling cap, which will fit fine under a helmet, or a peaked helmet. You've then got your own sun visor. By dipping your head towards the road, you'll pretty much eliminate the dazzle of low sun.

Dipping your head to focus on the road directly in front of you is a good way to deal with flickering light and shadow when the sun is off to one side, behind a fence or foliage

Cyclists are not required to have daytime running lights and, most of time, will not need them. In low winter sun, however, they may be useful. Your aim is to draw attention to yourself as soon as possible, so a flashing or pulsing light will be more effective than a steady light. A rear light needs to be very bright to be visible in strong sunlight; look for one offering tens of lumens in output. The front light doesn't need to be much more powerful than this, as you won't be using it to see where you're going and so don't need 'full-beam' brightness.

Clothing colour is less of a factor when someone is looking towards you in blinding sunlight. Either you'll be silhouetted or you won't. However, there are some colours that camouflage you more than others - a bright white jacket isn't ideal and black is less visible in most other circumstances, so also wouldn’t be the colour of choice. Lighting conditions change throughout the day, so bright colours are your best bet for the majority of your typical commute.

Whenever you're cycling in low sun conditions, be prepared to react quickly. Irrespective of whether you have priority, assume drivers haven't seen you unless the circumstances indicate otherwise. Be ready to slow down or stop.

Drivers can be blinded by the sun in any road environment. It's just as likely to happen in town as in the country. However, the danger of a blinded driver is directly proportional to the speed they're travelling at. A driver doing 60mph travels 27 metres per second and could be right on you in the squint of an eye. A driver travelling at 20 or 30mph has a much bigger margin for error, so roads with lower speed limits are safer whenever visibility is compromised.

Low sunlight isn't a uniform problem. It's significantly worse on some sections of east- or west-facing road than others. Choosing a more circuitous route to or from work may enable you to avoid these. If not, and if you're not comfortable mixing with drivers who might ignore Highway Code Rule 237, plot your sunny winter journeys to work using routes that drivers won't or can't use. Backstreets with bollards, cycle tracks, towpaths, and bridleways can make excellent commuting routes now and at any time of year.

Clothing colour is less of a factor when someone is looking towards you in blinding sunlight. Either you'll be silhouetted or you won't. However, there are some colours that camouflage you more than others - a bright white jacket isn't ideal and black is less visible in most other circumstances, so also wouldn’t be the colour of choice.

How to change gear efficiently

Crunching changes, failed shifts, and stalling are just as bad on a bike as in a car. Here’s how...

How to know when you need to replace your tyres

A worn or damaged tyre could cause a blowout and sudden loss of control. Here’s how to spot when...

How to use tyre valves

Whether pumping tyres or buying innertubes, you need to know what valves your bike has and how...