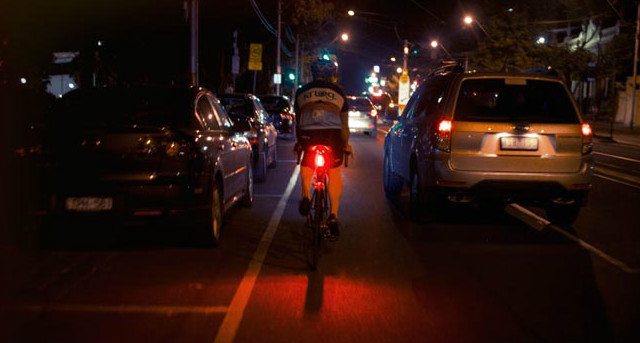 Winter days are short and often gloomy. A brighter rear light will get you noticed more easily in the twilight and the dark.

Along with a front light, a functioning rear light is required by law any time you ride on a public road between dusk and dawn. Unlike bikes in continental northern Europe, which are often sold with dynamo lighting, few bikes in the UK come with lights. You can, however, include them in your Cyclescheme package.

The Road Vehicles Lighting Regulations (RVLR ) state that a bicycle's rear light should be attached to the bike centrally or offside from 35-150cm from the ground and be visible from the rear. You can add other rear lights – to a helmet or backpack, for example – but still need one on the bike itself. Unless it can only flash (no steady mode), your main rear light must be marked as conforming to BS3648, BS6102/3, or an equivalent EC standard.

Few lights meet this requirement. Fortunately, the police take a pragmatic approach: they just want to see lights on your bike. It pays to use a bright rear light. As well as making you easier to see – and avoid! – a bright rear light is demonstrably effective even if it is unapproved by RVLR. In the unlikely event that you have an incident with a motorist, the effectiveness of your light is a defence against any solicitor who tries to portray you as a scofflaw.

How bright does your rear light need to be? It depends how far away you need to be seen. A commute that takes in A-roads or back lanes with 60mph traffic requires a brighter rear light than one that takes place on 30mph urban roads with streetlights; look for a light output in the tens of lumens in the former case.

A flashing rear light attracts attention better than a steady rear light but makes it harder for road users to track your position. So a flasher works best under streetlights or when you're using two rear lights, one steady, one flashing.

Rear lights don't burn through batteries as quickly as front lights. They don't have to emit a beam to see by, and LEDs emit red light more efficiently than white light. So disposable batteries last quite well in a commuting rear light. A rechargeable rear light will still save you money in the long run.

Before buying any rear light, check how it attaches to see if that's compatible with your bike. Many battery lights attach only to the seatpost – a problem if you use a big saddlebag or a rack-top bag. Look for a secure bracket that allows easy fitting and removal of the light in the dark. Or get a light that bolts in place permanently. As with front lights, for commuting it's worth carrying or fitting a back-up in case your main light fails.

Here are five good battery lights ranging from £16 to £55.

Weighing a little over 50g, this flashing-or-steady rear light bolts to the rear mudguard that most all-weather commuting bikes will already have. If a reflector is fitted to the mudguard, this light goes in its place. If not, you (or your bike shop mechanic) need to drill a couple of holes in the mudguard 20mm apart. After that, you've got a rear light that you can't forget and that you don't need to spend time fitting and removing each ride. As well as its bright LED, the Fenderbot includes the rear reflector that's also required by the RVLR. It runs on 2xAAA batteries. 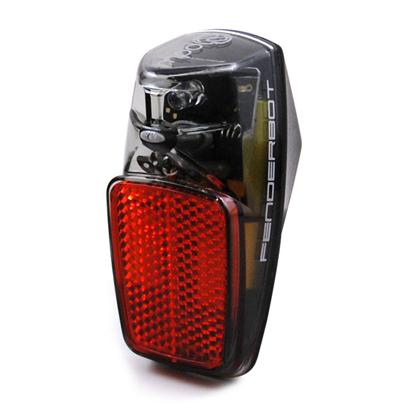 This light can easily be fitted to just about any bike. It comes with two sizes of O-ring for different seatposts, plus a belt clip. Also available are brackets to fix it to a pannier rack, saddle rails, and a helmet. Despite its size (21g), its circular LED is very bright and is visible through 270 degrees. Run times range from 12 hours (flashing at 6 lumens) to 1hr 30min (25 lumens steady), with a range of options in between. It recharges via USB, with an automatic cut off. The power button is easy to use while wearing gloves. 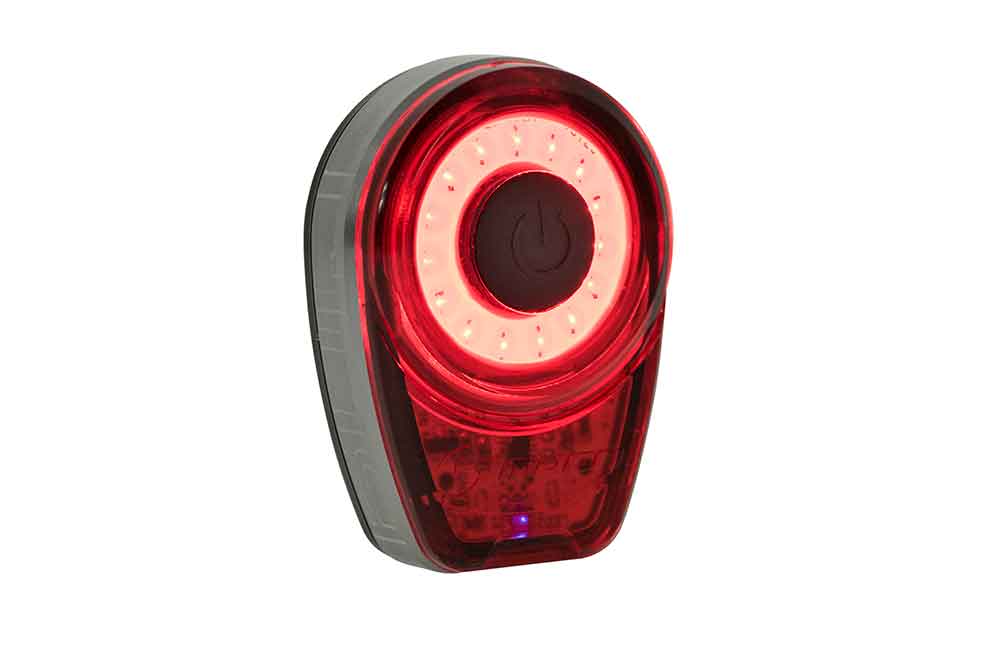 Another light that fixes permanently to your bike, the TopLight LineTec bolts to rear pannier racks with mounting holes 50mm or 80mm apart. Its two high-power LEDs shine through a special lens to give a wide strip of light that's visible through 320 degrees. It runs off a single AA battery for about 40 hours. While this light is available with a simple on/off switch, the Senso model comes on automatically when it's dark and the bike is moving, which is great for changing light conditions. It turns off four minutes after you stop. The light incorporates a large rear reflector. 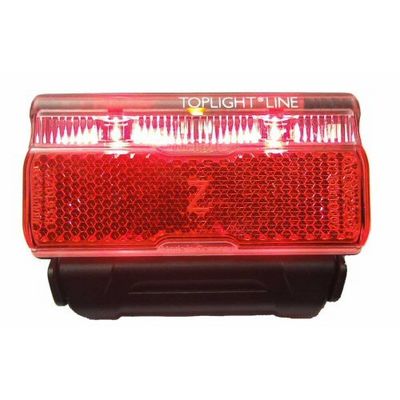 At about 50g and measuring 40x40x25mm, the Zecto Drive is an easily portable back-up light that's bright enough to use as your primary light. It emits up to 20 lumens, easily enough to be seen in daylight, and runs from under 3 hours up to 7 hours, depending on the flashing or steady mode selected. It recharges via USB, and there's a 'fuel gauge' to tell you when charging is required. It fits to the bike's seatpost with a rubber strap, and its flat shape means it won't accidentally rotate around the post. It can also be attached to bag loops or a belt. 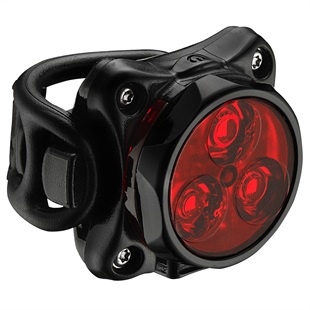 Don't use this on full power in group rides: it's eye-burningly bright for cyclists in a bunch, emitting 100 lumens on its high setting. Any motorist, however, should see you instantly. The light comes from COB LED strips, arranged in parallel lines rather than in a ring like the Moon light. Run time ranges from just one hour at 100 lumens to 30 hours flashing on lower power. It fits to the seatpost with an O-ring and is compatible with aero posts. It uses a Lithium-Ion battery that's recharged via USB. 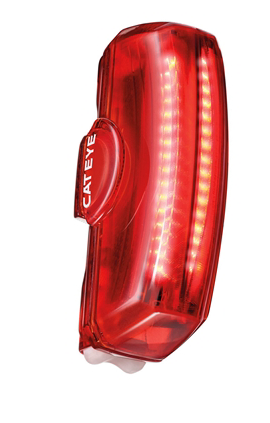