10 Reasons to be a cycle friendly employer 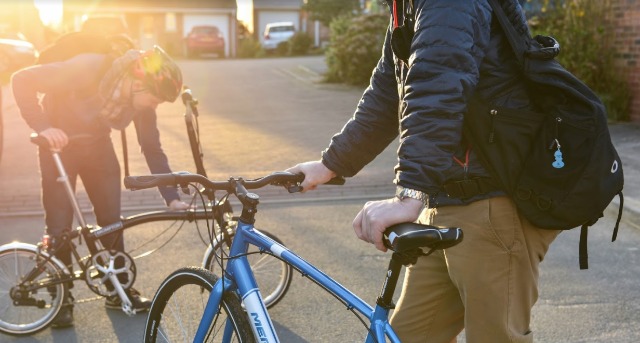 Signing up to Cyclescheme and supporting cycle commuters isn’t just good news for your staff: there are big benefits for employers too.

1. You pay less money to HMRC

Cyclescheme works through salary sacrifice. Employees who use it to get a bike and/or equipment save a minimum of 25% on RRP. That’s because the value of the Cyclescheme package is deducted from the employee’s gross salary, so there are no deductions for Income Tax or National Insurance. The salary sacrifice amount doesn’t incur Employer National Insurance Contributions either. As that’s normally 13.8%, you’ll save £138 when an employee uses Cyclescheme to obtain a bike worth £1,000! Signing up to Cyclescheme as an employer is free and can be done in 10 minutes online.

Regular cycling halves the number of sick days taken by staff, according to research by Sustrans. The average UK worker misses 4.5 days a year due to illness, the average cyclist just 2.4. Sick days cost businesses more than £100 per absent employer per day, assuming average wages. So every extra cyclist among your staff saves you more than £200 per year in reduced sick pay alone.

3. …and happier and more productive

As well as being energised when they get to work, cyclists are more likely than other transport users to arrive there on time. Cyclists’ journeys are predictable because they’re much less influenced by factors outside their control, such as traffic jams or delayed trains. Urban commuter races invariably see cyclists trouncing drivers, public transport users, and pedestrians. The punctuality evidence isn’t just anecdotal: a study by McGill University in Montreal, Canada, confirmed it.

Providing car parking spaces for staff is expensive, particularly in places where property prices are high. GlaxoSmithKline have estimated that in West London each car parking spot costs them £2,000 per year. Since it’s possible to park up to a dozen bicycles in the same space – or more if they’re compact folding bikes – there are big savings to be made when staff switch from cars to bikes for commuting.

6. Facilities for cyclists benefit other employees

Cycling doesn’t have to mean working up a sweat. Those who ride shorter distances more steadily are unlikely to need to shower and change on arrival. But for thosecycliststravelling further or faster, shower facilities, along with lockers and maybe even a drying room, are really helpful. Non-cyclingstaffbenefit too, as they can spruce up after a lunchtime run or gym session.

7. The mileage rate for cycling is lower than for driving

The tax-free mileage rate that employees can claim for using their car on business is 45 pence per mile (for the first 10,000 miles). The rate for cycling is 20p per mile. These rates apply for employees who travel during the course of their work; they’re not paid for commuting. But if you have staff travelling between different sites or needing to be out and about, it’s much more economical if they go by bike. A cyclist’s travel expenses will cost you less than half as much as a driver’s.

Despite the tax breaks available for company cars, company bikes cost a fraction as much. Why not invest in a pool of bikes for employees to use? A handful of e-bikes or Bromptons, perhaps? Transport for London has some good advice on pool bikes for business. Pool bikes fill a different role from bikes obtained through Cyclescheme; they complement each other well.

9. Cycling is the only personal transport option for some of your employees

One in four adults (26%) doesn’t hold a driving licence, according to Government figures. The proportion who can’t ride a bike is just one in eight. That suggests that 14% of adults – one in seven – can cycle but not drive. Supporting them in cycling to work provides personal mobility they otherwise wouldn’t have. The same goes for those who can’t yet cycle at all. Cycle training would benefit both groups, as well as helping to convert employees who currently drive.

Cycling is environmentally friendly transport that reduces noise and air pollution. The European Cyclists’ Federation has calculated that a bicycle and rider are responsible for 21g of CO2 per mile, and an e-bike and rider just 22g of CO2 per mile. A car produces 271g per mile! Cycling also reduces traffic congestion, which costs the UK economy nearly £40billion per year. Encouraging and supporting cycling at your workplace helps do your bit in combating both pollution and congestion – and doing so shows corporate social responsibility. With young people increasingly turning their backs on cars, a company that’s demonstrably pro-cycling is likely to be better placed to attract the retain the best new talent.

Ready to add Cyclescheme as an employee benefit?

A prescription for cycling

In the wake of the coronavirus pandemic, the Government is focused on getting us fitter and...

Cycle to Work Day is back, with a twist!

Change comes from the top

There’s no better way to instil a cycling culture at work and improve the uptake of Cyclescheme...