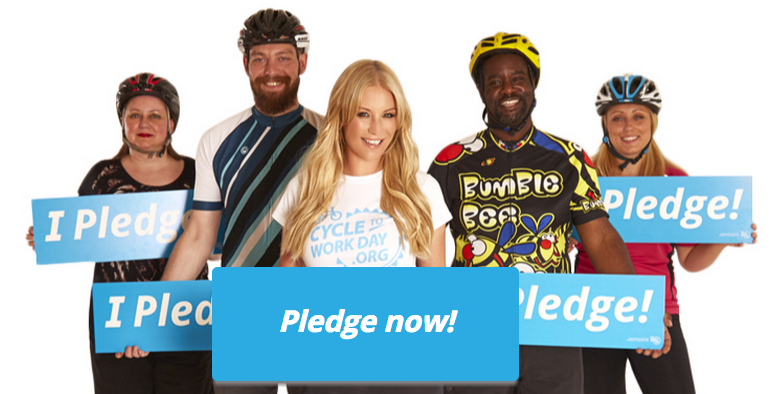 This year’s Cycle to Work Day took place on Thursday 3rd September, a national event aiming to encourage everyone to take to two wheels and cycle to work for just one day.

This year’s Cycle to Work Day took place on Thursday 3rd September, a national event aiming to encourage everyone to take to two wheels and cycle to work for just one day.

The number of pledging riders and miles ridden was nearly doubled, and the number of employers participating more than doubled from last year’s Cycle to Work Day.

All across the UK, hundreds of employers representing 1,043,965 staff joined in a day devoted to celebrating utility cycling and boosting health and wellbeing in the UK. Employers who took part include Tesco, Halls of Scotland, Aberystwyth University, The Landmark Practice, Good Energy, Danco plc, Retail Assist, Bike & Go, Cambourne Business Park, Cornish Mutual, and Councils such as Hartlepool Borough and Bath and North-East Somerset.

Social media highlights on Cycle to Work Day include trending on Twitter for 8 hours, with 24,697 tweets with a reach of over 45 million, 1,000 stories shared on Facebook, and the organisers receiving over 5,000 photos.

Cycle to Work Day featured on dozens of UK TV and radio programmes with Denise Van Outen, television presenter and an enthusiastic cyclist who has completed charity rides in India, Vietnam and Cambodia, and Sir Cary Cooper, professor of organisational psychology and health at Manchester Business School who provided expert analysis on Cyclescheme’s poll of over 1,000 people about the relationship between work and health and wellbeing.

Competition winners are Ade Roberts, Lee Burling and Ginnette Richell, who each win a Claud Butler bike for pledging to ride on Cycle to Work Day; Joel Ryan who wins a free 12 month membership to FitnessFirst.com, a leading health and fitness club who provided free showers at all of its UK gyms on Cycle to Work Day for riders; and Laura Weatherill and Vincent Campbell who each win a Claud Butler bike for the best photos taken on Cycle to Work Day itself, as judged by Elaine Curtain of road.cc, a leading cycling magazine. More winners result from a 12 day prize countdown on Twitter and Facebook. The full list of all winners can be viewed at https://www.cycletoworkday.org/winners.

Launched by Cyclescheme.co.uk, the UK’s leading cycle to work provider, the campaign aim is to see a million people get on their bikes to work by 2021 and is supported by British Cycling, Santander Cycles, Sustrans, the Bicycle Association, Act TravelWise, CTC and the London Cycling Campaign.

To find out more about Cyclescheme, the company behind Cycle to Work Day, go to www.cyclescheme.co.uk