Chris Boardman, MBE gets in the saddle for Cycle to Work Day on 14th September 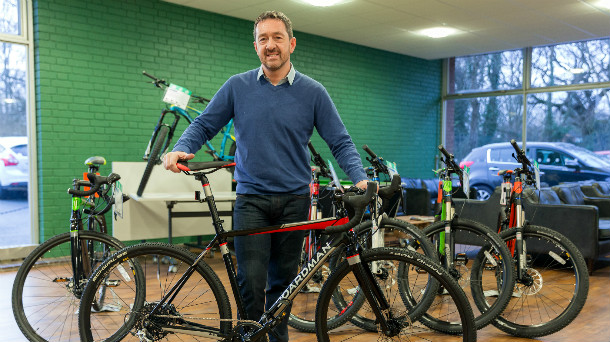 Cycle to Work Day 2016 is on Wednesday 14th September for a fantastic fourth year, encouraging everyone to take to two wheels and cycle to work for just one day.

The event’s ambassador, Chris Boardman, MBE, is a Olympic gold medallist and multiple award-winning and record-breaking cycling extraordinaire. The day has become a national annual event in the UK, and for the first time, Cycle to Work Day is inviting riders in Ireland to join in the event too.

The cycle to work scheme is an initiative to get people into cycling regularly through their everyday commute. The event is launched by Cyclescheme in partnership with Halfords.
2015’s event saw many of the campaign’s numbers close to double that of the previous year. The pledged number of riders rose to just under 33,000; miles ridden to just under half a million; and the number of employers reached just under 900, with a combined workforce of more-than-one-million employees.*

“I’m delighted to be the ambassador for Cycle to Work Day 2016, it's something I believe in deeply”, said Chris Boardman, MBE.“The occasion offers a focal point for people who don't cycle already to give it a go and for those that do, to celebrate this wonderful form of transport. People from all over the country and all walks of life united for a day by this wonderful machine and in doing so, help to remind us that our journey’s to work can be something to be enjoyed."

“We would like to get cyclists, employers encouraging their employees and bike shops all involved and supporting the event as we launch the first Cycle to Work Day in Ireland,” said Tracy O’Brien, Operations and Benefits Product Manager, Cyclescheme Ireland. “The event will be one celebration of everyday cycle commuting, so please pledge now to pedal or encourage colleagues, friends and family to get pedalling on the day.”

“With the future of health-related benefits through salary sacrifice such as cycle to work being protected in 2016’s UK Budget, we would like to get riders, employers and bike shops all involved in this year’s Cycle to Work Day.” said Stephen Holt, Commercial Director, Cyclescheme. “We’re proud to be behind this cycling event’s return for the fourth year in a row.”

Lucie Cherrington, Head of Cycle to Work at Halfords said: “We’re thrilled to be able to throw our weight behind Cycle to Work Day in its fourth year. It is clear that so many UK businesses are committed to getting more people cycling - it is great for business and helps towards building a more productive, happier workforce, so this year, we would love to see as many people as possible get involved in this brilliant initiative”.

The campaign’s aim is for a million people in the UK and Ireland to get on their bikes to work by 2021. It is supported also this year by Act Travelwise, BikeBiz, Bicycle Association, British Cycling, Cycling UK, London Cycling Campaign, Sustrans and Transport for London.
Pledge your support now as a rider, retailer, or employer for Cycle to Work Day via: www.cycletoworkday.org

In addition, more people will have taken part in the event without pledging on the Cycle to Work Day website at www.cycletoworkday.org