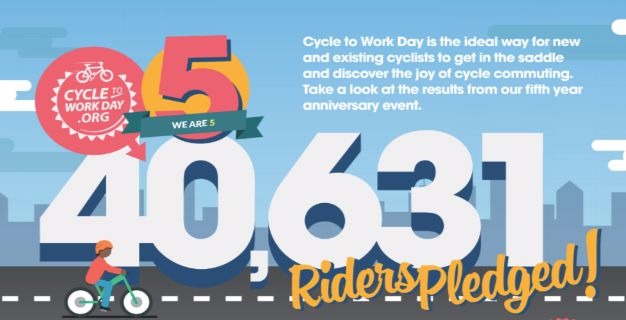 The wind, wet weather and power outages couldn’t stop the UK from getting in the saddle. Cycle to Work Day 2017 was another record-breaking year!

Over 40,000 people across the UK pledged to ride in excess of one million miles. This is a 90%+ increase on the number of miles pledged for Cycle to Work Day 2016. The 2017 event was supported by over 800 employers and more than 2,300 retailers nationwide.

The 5th annual celebration of everyday cycling took place on Wednesday 13th September 2017. Due to Storm Aileen, however, Cyclescheme took the unprecedented decision to extend the event by 24 hours. This ensured that new and existing cycle commuters across the UK could safely take to two wheels and celebrate Cycle to Work Day.

We were honoured that Chris Boardman, MBE returned as Cycle to Work Day ambassador for a second year. Boardman, with his recent appointment as Cycling and Walking Commissioner for Greater Manchester and his long standing partnership with Halfords, was the ideal figurehead to encourage the UK to get in the saddle. Boardman was joined by Adrian Warren, Director of Cyclescheme and together the pair took to the UK airwaves to shout about Cycle to Work Day.

They conducted over 20 radio interviews; this included BBC Radio Scotland with an audience reach of 929,000! Cycle to Work Day also secured an interview feature on ITV, which was broadcast in 6 regions across the lunchtime news segment on the day itself. In total news of Cycle to Work Day featured in over 300 newspapers, websites, and blogs across the week of the event. What's more - on Wednesday 13th September #cycletoworkday was trending in second position on Twitter in the UK.

Cycle to Work Day was founded in 2013 by Cyclescheme to celebrate everyday cycling. Each year the event encourages thousands of new, returning and existing cyclists to experience the benefits of cycle commuting and kick-start a habit of a lifetime. In 2016, Halfords joined Cyclescheme as an official partner of Cycle to Work Day. The event is also supported by numerous cycling organisations and charities across the UK including British Cycling, Love to Ride UK and Cycling UK.

The Cycle to Work Day 2017 infographic below demonstrates just have far reaching and successful this year's campaign was.

Here’s a quick look at the numbers, and some of the activities that took place on the day. This year’s Cycle to Work day took place on Wednesday 13th September.

- £500,000 was saved from people taking to their bicycles over other forms of transport.

Cycle to Work Day was a hot topic this year! As there was so much coverage we thought we’d document it all in one place;