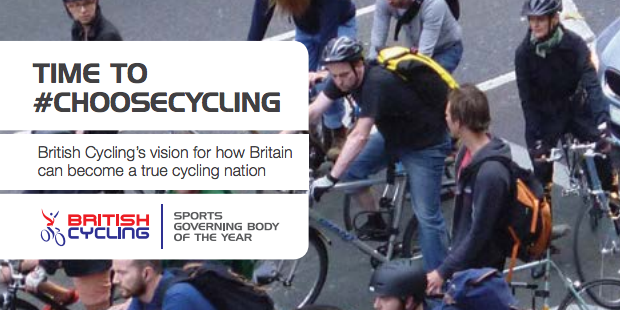 The government’s Cycling and Walking Investment Strategy needs “smarter investment” and “stronger leadership” if it is going to deliver on its promise to double cycling levels, businesses in the #ChooseCycling Network said today, on the closing date of the Department for Transport’s consultation.

In a joint letter to Transport Secretary Patrick McLoughlin the network, which includes Sky, Santander, Tesco, Aldi, Halfords and GlaxoSmithKline, talks about the “huge opportunity” that the strategy presents “to set the country on a course to transform levels of cycling and walking by 2040”.

National government has committed just £300 million over five years to fund cycling infrastructure, amounting to less than £1 a head, ten times less than the amount recommended by the All Party Parliamentary Cycling Group’s Get Britain Cycling report - unanimously accepted by politicians as the

The Chancellor’s National Infrastructure Delivery Plan – which was published in March 2016 and brings together the government’s infrastructure priorities for the next five years - talks about the “creation of vibrant new places to live and work” and yet fails to mention cycling even once.

The #ChooseCycling Network, a 40-strong group of businesses and organisations representing over 550,000 employees and millions of customers, today set out three asks that it argues make up a “strong national strategy” for cycling.

British Cycling policy adviser Chris Boardman, who will today address MPs at a panel session of the All

“If I were presenting the government’s cycling investment strategy as a workable proposal for any of the businesses in the #ChooseCycling network, I would be laughed out of the room. It is simply not possible to make cycling the “natural choice” for short journeys by investing less than £1 per head – less than the cost of a cup of coffee. As the government run the country, I’d hope they know this.

“The longer cycling gets treated as an afterthought or a charity case, the longer we are missing out on a unique opportunity to create a healthier, happier and more active nation. This is no longer just something that people who already ride bikes want to see happen, this is something that 70% of people in Britain agree with and increasingly, as we have seen today, businesses across all sectors.”

The joint letter that Chris Boardman, Chair of the network, today signed on behalf of #ChooseCycling network businesses is available here.

The All Party Parliamentary Group for Cycling is today holding a mini inquiry into the government’s draft Cycling and Walking Investment Strategy and will be hearing evidence from leading transport and business sectors.

For more information about how to get into cycling visit www.britishcycling.org.uk/getinvolved